Arsenal 2 Southampton 1 - The lads get out of jail 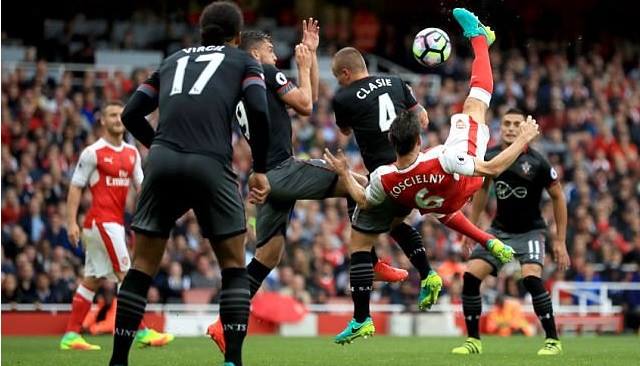 This was a far from convincing performance - weird team selection, and not a lot of cohesion.

Things will improve I'm sure - I don't think Wenger knows his best eleven, or where to play them. Not great for someone on nine million a year.

We desperately needed the three points, and didn't look like getting them until our lucky break in stoppage time.

I don't care though - we will improve.

Santi Cazorla's controversial stoppage-time penalty was enough to give Arsenal victory over Southampton in their Premier League meeting at the Emirates Stadium on Saturday.

With the match deep into added time and both sides looking like taking a share of the spoils, Cazorla thrashed home a spot-kick to seal a 2-1 win after substitute Olivier Giroud had been tugged to the ground by Jose Fonte.

But questions will be asked as to whether play should have been stopped by referee Robert Madley as Gunners' skipper Laurent Koscielny lay prone in front of the Saints goal with a head injury at the time.

Southampton had led through an own goal from Petr Cech with birthday boy Koscielny drawing Arsene Wenger's side level with a stunning overhead kick.

It looked like Wenger would have to settle for a point until Madley's late call allowed Cazorla to secure a second win of the season for Arsenal.

It was Claude Puel's men who settled the quicker of the two sides and they were ahead in the 18th minute when Dusan Tadic's free-kick was tipped onto the crossbar by Cech, with the ball then hitting the goalkeeper on the back and creeping over the line.

Arsenal were slow to get going, with debutant Lucas Perez quiet and Mesut Ozil off-colour, but they eventually enjoyed their first period of sustained pressure just before the half-hour mark.

And it led to the equaliser as Southampton failed to clear Cazorla's corner, with Koscielny finishing acrobatically from Lucas' back-header.

After the break the hosts were camped in the Saints half but could not test Fraser Forster, with Hector Bellerin's shot flashing wide on the hour the closest they came before Wenger made a double-change.

Lucas was replaced by Giroud while Sanchez came on in place of Alex Oxlade-Chamberlain, but it was Southampton substitute Shane Long who should have had the visitors back in front.

Tadic did well to fend off Koscielny before playing Long in behind with a cute back-heel, only for the Republic of Ireland forward to lift a tame shot over Cech and well wide of goal.

Sanchez got his first sniff of goal moments later but could only arrow an effort over Forster's crossbar after breaking inside Cedric and into the box.

With the game still in the balance, Long headed over a good chance from the middle of Cech's goal before Nacho Monreal's strike was deflected behind by Cedric.

Cech made amends for his unfortunate own goal by keeping out a deflected Pierre-Emile Hojbjerg shot and then pouncing up to save Long's follow-up with his feet.

And the points would be secured by Arsenal as they played on despite Koscielny being down in the box, referee Madley allowing them to do so, and Giroud was pulled down by Fonte with Cazorla keeping his nerve to slot home his second penalty of the season.