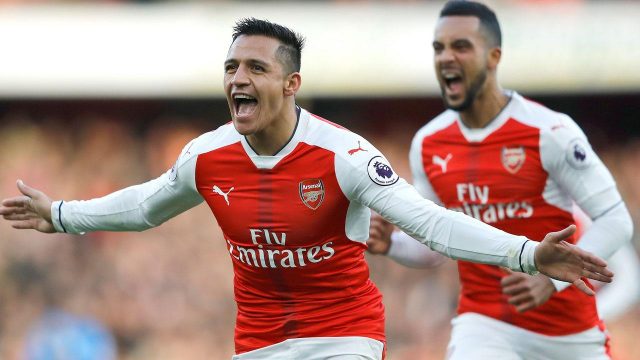 A much needed return to winning ways.

We're still not firing on all cylinders - I blame the lack of Cazorla - he makes the team tick.

Alexis Sanchez at the double as Arsenal see off Bournemouth

Alexis Sanchez scored twice as Arsenal ended their usual barren November run with victory over Bournemouth at the Emirates Stadium on Sunday.

The Chilean struck in either half as the hosts ran out 3-1 winners to end Arsenal's run of three draws during a month when they notoriously struggle to pick up points.

The Gunners took the lead early on in the first half after Bournemouth defender Steve Cook's mistake gifted Sanchez his ninth goal of the season.

The visitors got back into the game, with Callum Wilson equalising from the penalty spot after he was brought down in the box by Nacho Monreal.

But second-half goals from Theo Walcott and Sanchez saw Arsene Wenger's side win in the Premier League for the first time since October 29.

Arsenal started the game the stronger side with Mohamed Elneny's early shot being headed away by Nathan Ake although the home side did not have to wait too much longer to open the scoring.

Sanchez made the most of a mistake by Cook, whose weak back pass left Bournemouth goalkeeper Adam Federici stranded and the Gunners forward with a simple finish.

On 14 minutes Arsenal thought they had a good shout for a penalty when Dan Gosling appeared to bring down Sanchez but referee Mike Jones waved the protests away.

Arsenal suffered a blow a minute later when Mathieu Debuchy, who started an Arsenal game for the first time in 370 days, was forced off with a hamstring injury.

Bournemouth began to come into their own and soon started to dominate possession, passing through the Arsenal midfield, who appeared frustrated by a number of decisions made by the referee.

On 22 minutes Bournemouth were awarded a penalty when Monreal brought down Wilson in the box.

The Cherries striker sent Petr Cech the wrong way to level the score and become Bournemouth's top Premier League goalscorer of all time in the process.

Eddie Howe's side continued to put pressure on the hosts with Brad Smith's shot just before the half hour mark saved by Cech.

Sanchez brought down Mesut Ozil's cross on the right-hand side of the box on the stroke of half-time but flashed an effort off the crossbar.

Arsenal came out for the second half fired up and immediately started to pile pressure on Bournemouth, who had their net breached for a second time on Sunday afternoon after 53 minutes.

Walcott, whose wife gave birth to a baby boy on Saturday, was left unmarked at the back post to head home Monreal's cross.

The home side came close to doubling their advantage but Ozil's shot from inside the box was saved by Federici, whose side then attempted to get themselves back into the game.

The Cherries appealed for a second penalty on 73 minutes for a handball against Monreal but Jones waved away the protests, booking Harry Arter in the process.

Bournemouth's best chance of the half came from former Arsenal striker Benik Afobe, whose close-range shot was well-saved by Cech.

The win was wrapped up when Sanchez finished off a flowing attack late on, extending Arsenal's unbeaten Premier League run to 12 games.