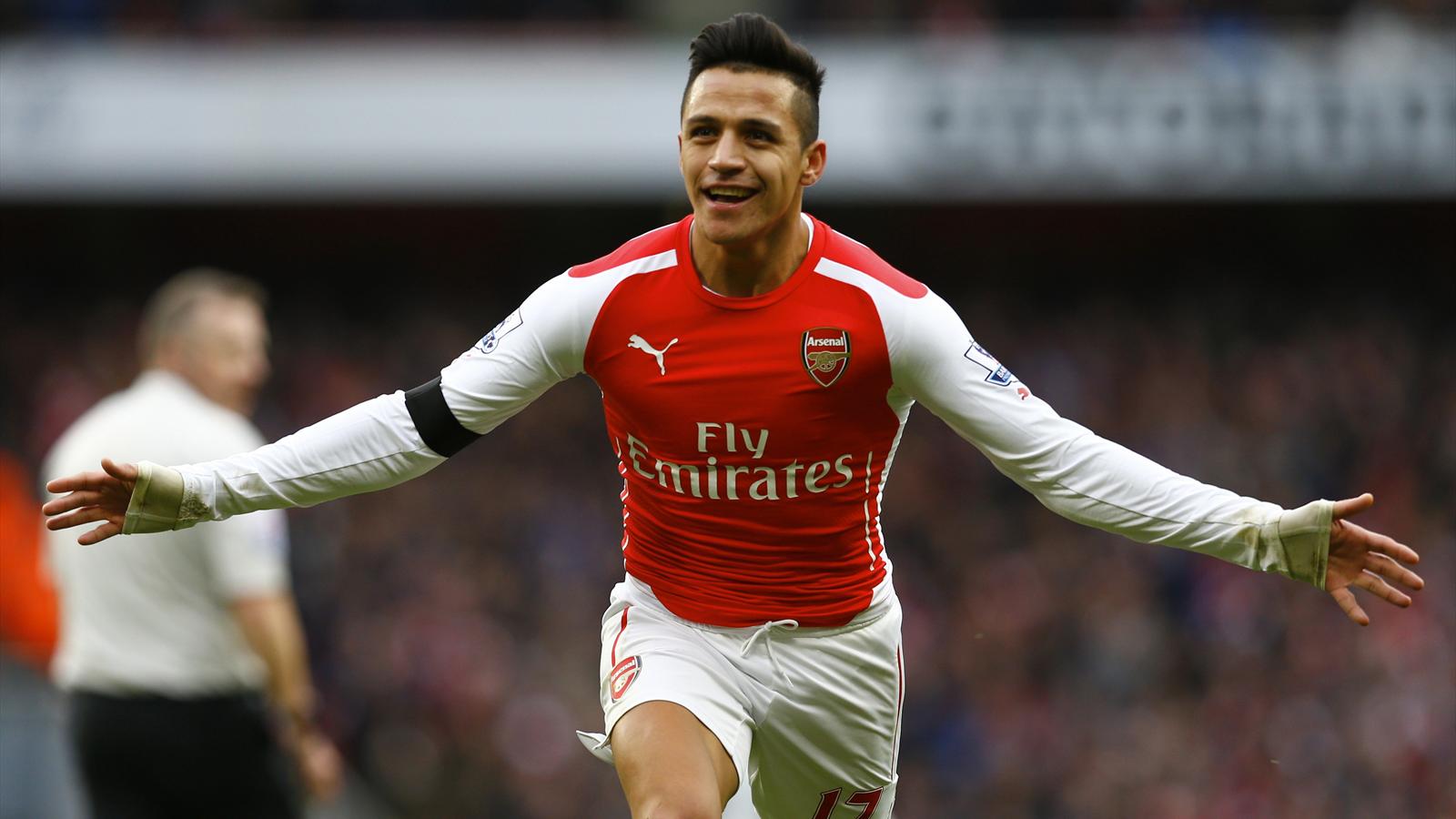 How do you keep this man down? - the human equivalent of the Duracell rabbit just keeps on delivering.

This was as good a team performance as I've seen all season, although strangely Stoke just didn't turn up - a very different prospect away from home.

Alexis Sanchez scored another breathtaking goal as Arsenal closed back up on the top four of the Barclays Premier League with a 3-0 win over Stoke at the Emirates Stadium, where goalkeeper Wojciech Szczesny had been left on the bench.The Chile forward, signed for B#30million in the summer from Barcelona, took his tally in an impressive debut campaign to 18

His first was a brilliant solo effort in the 33rd minute having earlier set up Laurent Koscielny for the opener, before netting a deflected free-kick at the start of the second half.The result meant the Gunners leapfrog Tottenham into fifth place, level on points with Southampton, who play Manchester United later on Sunday.The victory, though, could have come at a cost as full-back Mathieu Debuchy, who had only just returned from an ankle problem, was carried off during the first half after suffering a shoulder injury when falling into the advertising hoardings after colliding with Stoke's Marko Arnautovic.Szczesny, meanwhile, had been left to watch on from the bench as Colombian David Ospina made his Premier League debut, the Poland international having found himself the centre of some negative headlines earlier this week for smoking in the showers after the defeat at Southampton on New Year's Day.Arsenal had shown their intent from kick-off as Sanchez tested Stoke goalkeeper Asmir Begovic with an early effort which was curling towards the bottom right corner before being pushed behind.Stoke had not won at Arsenal since August 1981, and were trailing again after five minutes.Begovic pushed an angled drive from Tomas Rosicky behind

Sanchez's corner was only half-cleared, and Koscielny played the loose ball back out to the Chile international.Centre-back Koscielny ran off into the six-yard box and ghosted in unmarked to plant a firm header past Begovic after a peach of a cross from Sanchez.Arsenal were soon forced into a defensive change as Debuchy was sent tumbling behind the goal after colliding with Arnautovic.The France defender needed medical assistance and was eventually carried off on a stretcher, clutching his shoulder

Hector Bellerin came on in the 13th minute.Arsenal continued their offensive, with Alex Oxlade-Chamberlain shooting wide after being played in on the right by Sanchez.Olivier Giroud - who returned from a three-match suspension - was denied by a spectacular flying save from Begovic.Glenn Whelan fired over after a clever free-kick from Bojan Krkic on the right was pulled back to the edge of the Arsenal area, but it was 2-0 Arsenal in the 33rd minute thanks to a goal of the highest order from Sanchez.A quick exchange with Rosicky put Sanchez in space on the right

He jumped the lunging challenge of Steven Nzonzi before darting into the penalty area, where he turned Stoke captain Ryan Shawcross inside-out before clipping the ball past Begovic inside the goalkeeper's near post.When play resumed, Nacho Monreal was caught in the face by a stray elbow from Stoke forward Peter Crouch and needed several minutes of treatment for a cut just above his eye.Stoke looked to regroup for the second half, with Nzonzi replaced by Steve Sidwell and Erik Pieters by Marc Muniesa.However, it was 3-0 and game over in the 49th minute.Sidwell tripped Oxlade-Chamberlain on the edge of the penalty area

Sanchez's low free-kick took a deflection off Geoff Cameron in the wall which deceived Begovic, who could only push the ball against the post before it squirmed over the goalline.Arsenal went close again when Santi Cazorla shaved the crossbar with an angled chip as the Gunners grew in confidence

Fit-again England forward Theo Walcott and then German playmaker Mesut Ozil, who had been out since October with a knee injury, were sent on for the closing stages and both men shot wide when played in on goal