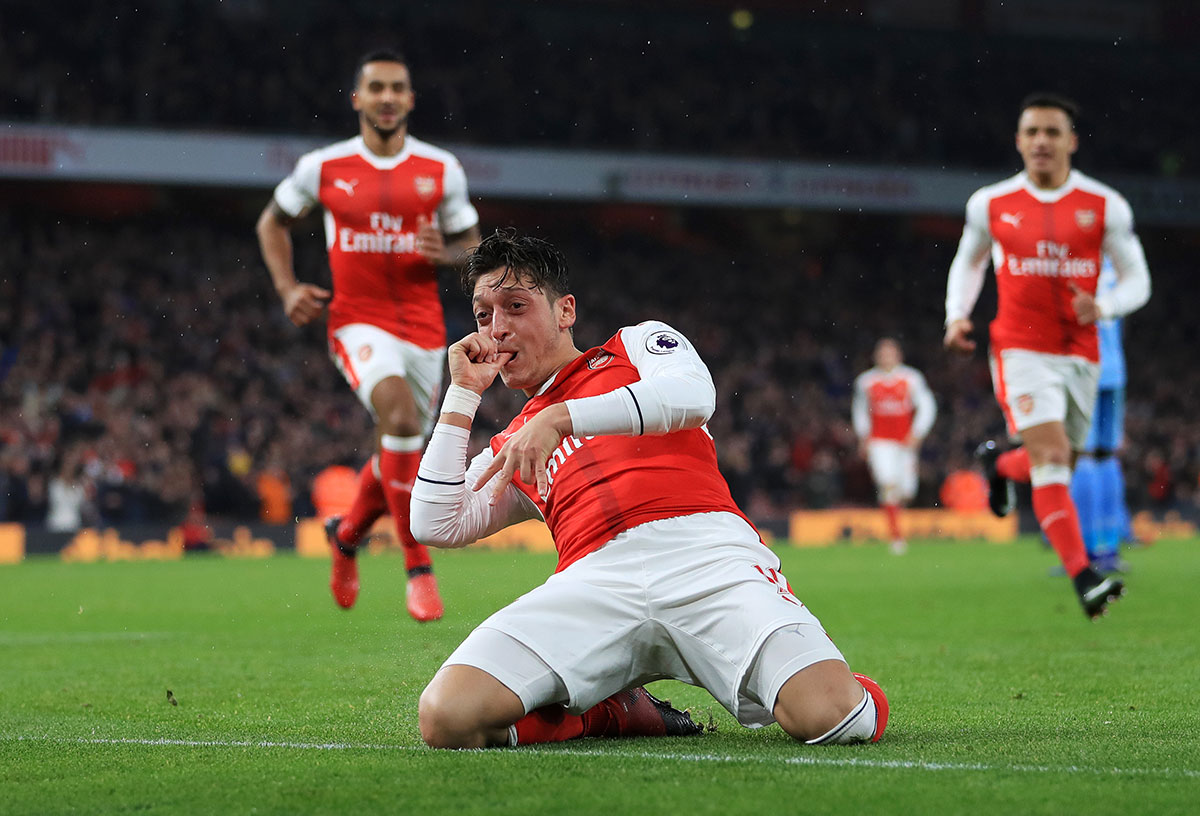 Despite going in front by way of a very dodgy penalty given by referee Lee Mason, the visitors soon succumbed.

Ironically though, we didn't look at our best all afternoon.

Goals from Walcott, Ozil and Iwobi won the game, however there were other talking points.

Charlie Adam could clearly be seen stamping on alexis Sanchez during the build up to Iwobi's goal - the referee was playing the advantage (quite correctly) but seemingly failed to notice Adam stamping on Alexis as he lay on the ground from the previous foul on him. No doubt this won't be picked up by the media.

Three points was the main quest this afternoon, and the lads delivered without fuss, and to be fair without too much spectacular football.

Arsenal came from behind to go top of the Premier League table and extend their unbeaten league run to 14 league games with a 3-1 win over Stoke at the Emirates Stadium.

Birthday-boy Charlie Adam opened the scoring from the spot when Stoke were awarded a penalty after Granit Xhaka elbowed Joe Allen him in the face but Arsenal got themselves back into the game with five minutes left of the first half through Theo Walcott's close-range finish.

The Gunners took the lead shortly after half time with Mesut Ozil heading the ball over Lee Grant, with substitute Alex Iwobi adding the third, which sees the hosts go top of the table on goal difference from London rivals Chelsea.

Arsene Wenger made six changes from the side which beat Basle 4-1 in the Champions League on Tuesday, while Allen came in for the injured Jonathan Walters in the Stoke starting XI.

After a slow start it was Stoke, who were looking for their third league win in a row, who had the best chance of the opening 10 minutes as Marc Muniesa's shot whistled just over the crossbar.

The Gunners suffered a blow just on 25 minutes when Shkodran Mustafi was forced off due to a hamstring injury.

The centre-back was replaced by Hector Bellerin, himself back in the squad for the first time in more than a month after overcoming an ankle problem, with Gabriel shifting into the middle of the back four.

The new-look defence was soon under pressure and just two minutes later referee Lee Mason awarded the visitors a penalty after Xhaka's clumsy challenge and elbow on Allen.

A brief pause followed whilst the Stoke medical team patched up the 26-year-old midfielder, but on the half-hour mark Adam stepped up to the penalty spot and sent Petr Cech the wrong way to put Stoke ahead.

Adam came close to a second on 40 minutes but his curling shot was blocked by Gabriel, as Arsenal stuttered.

But, with only a few minutes of the first-half remaining, the Gunners finally clicked into gear.

Bellerin's cross into the box fell to Walcott, who slotted it past goalkeeper Grant to get his 10th goal of the season and the 100th club goal of his career.

It did not take long after the break for Arsenal to start dominating the game and, on 50 minutes, Alex Oxlade-Chamberlain's long-range cross found Ozil unmarked in the box and, spotting that the Grant was off his line, the Germany international headed the ball over him.

The goal appeared to bring Stoke back into the game and Mark Hughes' tactical change almost paid off as Peter Crouch, who had replaced Mame Biram Diouf just a moment before, saw his header - and first touch of the ball - saved by Cech.

Arsenal made sure of the points in the 75th minute thanks to substitute Iwobi after Alexis Sanchez was tripped on the edge of the area by Bruno Martins Indi, with referee Mason waving play on to allow the Nigeria international to slot the ball home.