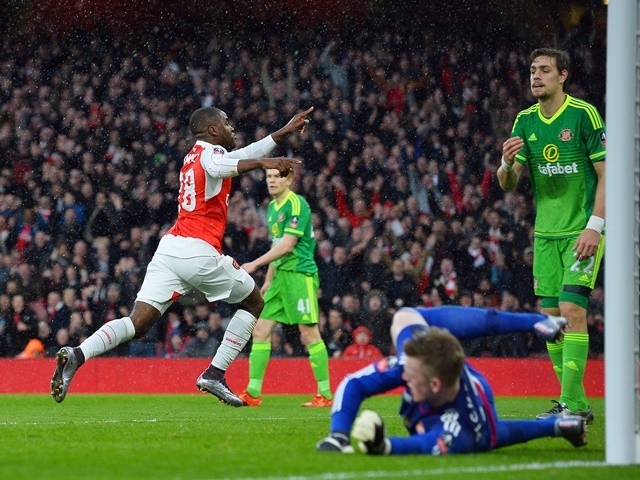 As seems to be the norm at the moment, we started slowly and let the visitors get a goal start. I'm not entirely sure why this is happening at the moment, but it could be a combination of fatigue (with a lack of quality replacements far too much pressure is being put on the squad) or simple complacency in the face of average opposition.

It would be nice to notch up a thirs successive FA Cup, but at the end of the day I'd rather take the league - more importantly though we need players to return to the squad fit to play.

Will Arsene spend before the transfer window shuts?

FA Cup holders Arsenal came from behind to beat a much-changed Sunderland side in their third-round meeting at the Emirates Stadium on Saturday.

Arsene Wenger is looking to win the trophy for a third successive year but, with their place at the top of the Barclays Premier League to defend, the Frenchman made five changes with the likes of Mesut Ozil and Per Mertesacker rested.

Sunderland boss Sam Allardyce also made changes as he said he would but his visitors, with seven alterations from the win over Aston Villa, took the lead before succumbing to a 3-1 defeat.

It was Jeremain Lens who put the Black Cats ahead after a defensive mishap but Joel Campbell levelled before goals from substitute Aaron Ramsey and Olivier Giroud saw the hosts through comfortably.

Of Sunderland's seven changes, goalkeeper Jordan Pickford was the most noteworthy as the England Under-21 international made his senior debut.

And he was forced into action inside the opening 10 minutes, turning behind an effort from Kieran Gibbs after the full-back had streaked into the box unopposed to be picked out by Giroud.

Petr Cech was again starting in goal for Arsenal as David Ospina, who Wenger had said would take his place for this game, injured his groin and was forced to sit it out.

But even Cech could do nothing to prevent Sunderland going ahead as Gibbs and Laurent Koscielny managed to present possession to Lens, who made no mistake with an unerring finish to put Allardyce's men 1-0 up.

Campbell then headed over after Pickford had parried a Walcott shot.The holders started the second half strongly as Campbell and Alex Iwobi worked a couple of smart openings before Alex Oxlade-Chamberlain saw a curling effort come back off the post with Pickford beaten.

Sunderland reacted and soon rattled the woodwork themselves as Steven Fletcher headed DeAndre Yedlin's cross against the bar, with Duncan Watmore turning the rebound high and wide from in front of goal.

The game was beginning to open up and Campbell again came close, this time Pickford keeping out a close-range shot following a neat interchange with Olivier Giroud.

Wenger introduced Ramsey, as well as Mikel Arteta, at the midway point of the second half and both combined to set Gibbs away down the left.

The Arsenal pressure eventually paid off as Hector Bellerin got in down the right and crossed low into the path of Ramsey, who swept home easily.

Giroud added the third after more good work from Bellerin, who was arguably the best player on the pitch, as Arsenal assured themselves of a place in Monday's draw.

There was still time for Pickford to save well from the striker, who had also been left screaming for a penalty moments earlier, but Arsenal claimed a win by the same scoreline as their December league victory over the Black Cats - with the same trio on the scoresheet