Arsenal 3 Swansea 2 - Theo at the double 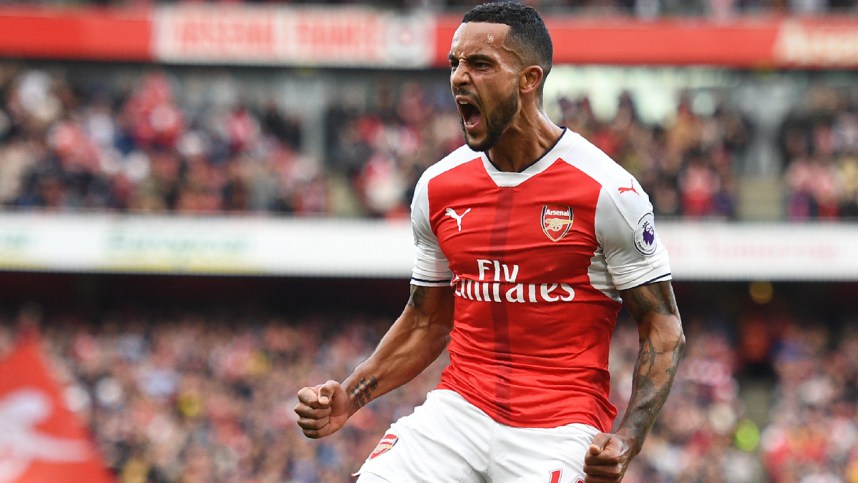 Swansea are a team who have given us trouble over recent seasons, and to their credit the came to The Emirates with new manager Bob Bradley and put up a good display.

We however, were better.

The oft-criticised Theo Walcott produced a match winning performance which will do him (and the team) a world of good. He's a confidence player, and right now it'll be sky high.

This is just what we need with another European game on Wednesday night.

Bob Bradley's first game as Swansea manager ended in defeat as his side were narrowly beaten by 10-man Arsenal in an entertaining clash at the Emirates Stadium.

The Swans had won here on their previous two visits and had not lost away to Arsenal in over five years but, despite threatening a comeback, they succumbed to a 3-2 loss that sent the Gunners level with Manchester City at the top of the table.

Theo Walcott was all-but gifted a brace to put Arsenal in charge but Granit Xhaka, who would later be sent off by referee Jon Moss, handed possession to Gylfi Sigurdsson to bring Bradley's side back into the game.

Birthday boy Mesut Ozil restored Arsenal's two-goal cushion with a well-taken volley but a first Swansea goal for record-signing Borja Baston kept things nervy for the Gunners, who played with 10 men for the final 20 minutes after Xhaka was shown a straight red card for bringing down the impressive Modou Barrow.

Like the last-gasp win at Burnley before the international break, this was in no way a vintage Arsenal display but they held on to secure a sixth consecutive league win and remain unbeaten since the opening weekend of the season.

Shkodran Mustafi headed Ozil's corner against the crossbar before the visitors could have opened the scoring when Leroy Fer was picked out by Kyle Naughton, only for the Holland international to bend a shot over the top of Petr Cech's goal.

Arsenal were soon on top and took the lead as Hector Bellerin headed Sanchez's pass across goal where Jordi Amat dallied, allowing Walcott to nip in and put Arsenal in front from close range.

The hosts had their tails up and only a smart stop from their former goalkeeper Lukasz Fabianski kept Swansea in the game as Bellerin was released at the end of a flowing move only to see his effort turned behind.

But it was only a small respite as the second goal came from the resulting corner, Walcott again turning the ball home after it dropped to him when free just six yards out with Jack Cork having fallen oven while trying to clear.

Swansea got themselves back into the contest shortly before the break as Sigurdsson robbed Xhaka of possession and curled past Cech to halve the deficit.

Fabianski was on hand to keep out Walcott with the first chance of the second half as Alex Iwobi danced inside before Ozil's cross fell to the England international, but he could not find a way past his old colleague.

But the third goal was not long in coming as Sanchez found Ozil free at the back post and the Germany international thrashed a volley past Fabianski.

Still Bradley's side would fight on and substitute Borja swept home Barrow's low cross, before the Gambia winger was tripped from behind by Xhaka, who was given a harsh red card as a result.

Walcott was inches away from securing the points but was denied a hat-trick when his shot came back off the inside of the post before he blazed over from eight yards in stoppage time, but Wenger's men hung on the deny Swansea and leave Bradley's new charges just above the relegation zone.