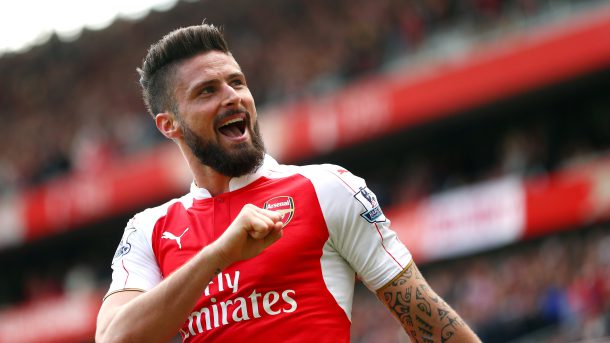 Sunshine, a hattrick from Giroud, and Spurs getting hammered - it all adds up to a second place finish, and no 'shift in the balance of power' in North London as some deluded folk have claimed.

Second place papers over the cracks though - we're going to lose experienced campaigners like Arteta and Rosicky this summer, and Welbeck can be ruled out for next season as well.

We need new blood, more than that we need world class new blood.

Can Wenger deliver? - you tell me.

Olivier Giroud's first-ever Barclays Premier League hat-trick saw Arsenal beat Aston Villa in the final game of the season to secure a second-place finish at the expense of rivals Tottenham.

It was an afternoon of 'what might have been' after the Gunners had entered 2016 top of the table and looking in good shape to claim their first title in 12 years.

Instead the 4-0 victory over the long-since relegated Villa saw Arsenal leapfrog Spurs to finish second to champions Leicester as Giroud picked the perfect time to show Arsene Wenger he can lead the line at the Emirates Stadium going into next season, with a last-gasp Mark Bunn own goal sealing the win.

The win, coupled with Tottenham's capitulation at Newcastle, means Arsenal have not finished below their neighbours since 1995 and were able to toast 'St Totteringham's Day', the name fans have given to the point where they are assured of finishing above Spurs, once again.

It could have been a simple end-of-season knockabout but, with second spot still up for grabs, Wenger's side at least had something to play for and they needed just five minutes to breach Villa's leaky defence.

Nacho Monreal broke down the left and crossed for an unmarked Giroud to head home past a despairing Bunn - although Mesut Ozil had appeared to run the ball out of play in the build-up.

Villa came close to levelling soon after but Andre Ayew's ball across the Arsenal goal was cleared by Gabriel after the forward had burst past Hector Bellerin and into the box.

Alexis Sanchez arrowed a shot wide as Arsenal looked to double their advantage before the break, although arguably the loudest cheers of the half came when news filtered through of Newcastle taking the lead over Spurs.

With England boss Roy Hodgson watching in the stands, Jack Wilshere should have scored when picked out six yards out but the 24-year-old - starting his first game in almost a year - could only turn his chance into the side-netting.

The Gunners were almost made to pay as Scott Sinclair was allowed to get a shot away, but it was wide of Petr Cech's far-post and Jordan Lyden's cutback could not find a Villa shirt.

The second half was a bland affair as the hosts struggled to create chances, while Villa did not look threatening on the rare occasions they committed men forward.

Wilshere's afternoon came to an end when he was replaced by Mohamed Elneny after 68 minutes and the Egypt midfielder was guilty of spurning a great chance as he wildly lashed a volley over from close range.

A fourth goal in stoppage time, an own goal by Bunn rather than a most-fitting finale for departing club captain Mikel Arteta - whose effort was tipped onto the bar before hitting the unwitting Villa stopper and rolling over the line, wrapped up the afternoon.