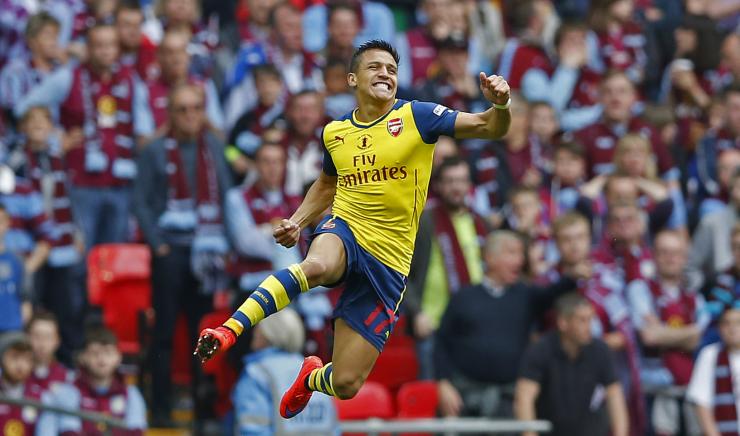 The lads were superb - the best team performance for a long time, and no one player could be accused of under-performing.

It's now time to move things up a notch and challenge for the title next season - you know what has to be done Arsene.

Arsenal broke records and the hearts of the 25,000 Aston Villa fans as they coasted to the biggest FA Cup final win in 21 years.

After escaping relegation, Tim Sherwood brought his Villa side to Wembley looking to win the FA Cup for the first time since 1957, but left in dejection following a 4-0 hammering.

Surprise starter Theo Walcott put Arsenal ahead at the end of a first half in which the Londoners dominated, Per Mertesacker scored the third and substitute Olivier Giroud rounded off the win at the death.But the pick of the goals undoubtedly came from Alexis Sanchez, who hammered a 25-yard screamer in off the bar just after the restart.

Some of the Villa fans who had made the 115-mile trip to the capital left early while the Arsenal supporters rejoiced at retaining the FA Cup with ease.

The Gunners have now won the trophy a record 12 times and Wenger has been at the helm for half of them.

The Frenchman may have had his critics over the second part of his 19-year reign at Arsenal, but his cup pedigree cannot be questioned. Only George Ramsay, who managed Villa from 1884-1926, has won the same number of FA Cups as Wenger.

It was the early-season form of Sanchez, a B#30million summer signing from Barcelona, that propelled Arsenal to their third-placed league finish this term, and the final will be remembered for the Chilean's fantastic strike.

But the likes of Mesut Ozil, Walcott, and Santi Cazorla deserve credit for their excellent performances in this win - the biggest in an FA Cup final since Manchester United beat Chelsea by the same scoreline in 1994.

On the day the FA was criticised for allowing Emirates to put its name to the organisation's most famous trophy, the supporters inside Wembley showed the spirit of the oldest cup competition in football was still very much alive.

The Villa fans, waving claret and blue flags on their first new Wembley final, made their team feel welcome on their trip south, but Arsenal looked very much at home in north London.

The Villa defence had to work extremely hard to repel the Gunners as they launched attack after attack on Shay Given's goal.Cazorla performed a series of stepovers to bamboozle the Villa defence, but his square ball across the box was cut out by Ron Vlaar.By the time 10 minutes had passed, Arsenal had taken three corners and Villa's defence was creaking.Villa had to resort to underhand means to stop their opponents

Villa's fifth foul in the opening quarter of an hour resulted in Tom Cleverley being booked when he took out Nacho Monreal.Given kept Villa in it, clubbing the ball away to deny Laurent Koscielny from close range.

Aaron Ramsey, selected ahead of Jack Wilshere, rippled the side-netting shortly after volleying over from close range and Alan Hutton put in a last-ditch block to deny Sanchez.Ozil, playing full of confidence, crossed for Walcott, who would have scored had Kieran Richardson not cleared off the line.

Fabian Delph followed Hutton into the book as Villa tried desperately to reach half-time without conceding, but Arsenal finally broke through five minutes before the break.Walcott, now operating on the flank, started the move down the left, feeding the ball to Monreal, whose cross was knocked down by Sanchez

Walcott steadied himself before driving the ball past Given and embarking on a wild celebration in front of the Gunners fans.The Villa support kept the faith, but five minutes into the second half, they were 2-0 down.

Given had shown athleticism beyond his years in the first half, but the 39-year-old could do nothing to stop Sanchez's screamer, which flew in from 25 yards off the underside of the bar.

The German tried - and failed - to head the ball in, but the ball brushed off his shoulder into the net

It was rotten luck for Villa, but no more than Arsenal deserved.

Substitute Gabriel Agbonlahor tried to inject some life into Villa

He thought he should have been awarded a penalty when he was hacked down by Francis Coquelin, but Jon Moss waved play on and Arsenal completed their win when Giroud tapped in Alex Oxlade-Chamberlain's cross in the final minute of injury time.