Let's not get too excited though, it's only a point when we needed three. 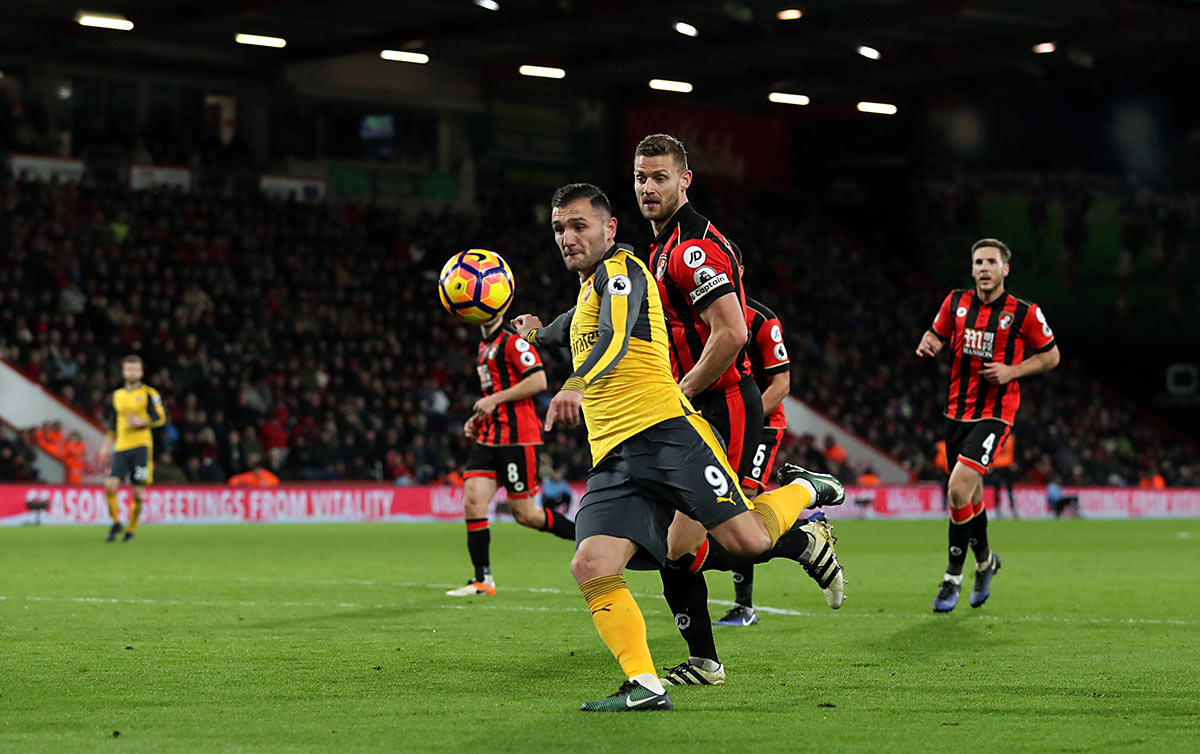 For seventy minutes we were utter shit - there's no other word for it. Bournemouth weren't frightened of us (why should they be?) and we simply weren't at the races.

Some shocking errors and Keystone Cops defending and we were three down - no way back from here I hear you say.

Nevertheless we pulled ourselves together (why can't we do this from the first whistle?) and drew 3-3.

It's just papering over the cracks though - We have fundamental problems that need addressing before we win the title again, just don't ask me what they are.

A mention for Lucas Perez, who came off the bench and scored an astounding goal - top man.

France striker Giroud salvaged a point for the Gunners in the second minute of added time, after the Cherries had led 3-0 on the hour.

Charlie Daniels, Callum Wilson and Ryan Fraser had put Bournemouth into a commanding lead, only for Simon Francis' late red card to let the Gunners back into the clash.

Arsenal still wasted the chance to move third in the table and cut their deficit with Chelsea to six points however, in an entertaining south-coast encounter.

Giroud met his third goal in as many games with sheer elation, adding his header here to the stunning 'scorpion kick' strike in the 2-0 win over Crystal Palace.

Arsenal were hugely fortunate to escape with any points however, after a horrendous 60-minute showing.

The visitors failed to heed that early warning though, with the influential Junior Stanislas laying on the opener.

The hosts had gained huge traction on the right flank, and so caught Arsenal cold with Stanislas' raking crossfield ball.

The scampering Daniels latched onto the inch-perfect switch, cut inside a bemused Hector Bellerin and then buried a low shot past a stranded Cech.

Half Daniels' family support Tottenham and half Arsenal, but all will have leapt for joy at their relative's stunning goal.

A palpably-shaken Arsenal continued to freeze, so Bournemouth struck again.

Stanislas and Wilson engineered a lightning break, sending Ryan Fraser into the box.

Granit Xhaka naively bundled over the flying Scotsman, and this time referee Michael Oliver had no hesitation in pointing to the spot.

Wilson appeared nervy but kept enough composure to slide the Cherries into a 2-0 lead - and all inside 20 minutes.

Arsenal's problems deepened when Francis Coquelin hobbled out with a suspected hamstring injury, forcing Aaron Ramsey to drop deeper with Alex Oxlade-Chamberlain onto the right flank.

Finally Arsenal produced a fluent move, only for Ramsey's effort to be deflected wide.

Bellerin was booked for upending Fraser, then Shkodran Mustafi pulled off a well-timed last-ditch tackle in Arsenal's box on Wilson, who took just too long to pull the trigger.

Alex Iwobi scuffed wide from Oxlade-Chamberlain's cutback, but that proved Arsenal's paltry lot for the half.

Giroud fluffed a header to open the second half, but Arsenal were quickly on the back foot once again.

Harry Arter had a goal ruled out owing to a questionable handball from Wilson. Cech parried Stanislas' cross straight to Arter, whose drilled shot wound up in the net via the unwitting Wilson's arm.

Referee Oliver chalked off the goal, and was raising the coaches' ire moments later when Bournemouth finally did claim their third.

Fraser raced onto Daniels' ball and outmuscled the all-too frail Bellerin, before slotting the ball between Cech's legs for the Cherries' third goal.

A visibly-frustrated Arsene Wenger was quickly remonstrating with fourth official Graham Scott, no doubt claiming Fraser had fouled Bellerin in the build-up.

Arsenal finally woke up with 20 minutes to play, Sanchez scoring with the Gunners' first meaningful effort on goal.

Giroud flicked on Oxlade-Chamberlain's whipped right-wing cross, and the unmarked Sanchez did the rest at the far post.

Gosling spurned a fine chance to end the argument by blasting over the bar, before Francis saw red for a clumsy challenge on Ramsey.

And as Bournemouth's defending became ever more fraught, Granit Xhaka laid on a fine cross for Giroud to nod home the equaliser.