Brighton 2 Arsenal 3 - No upset on the south coast 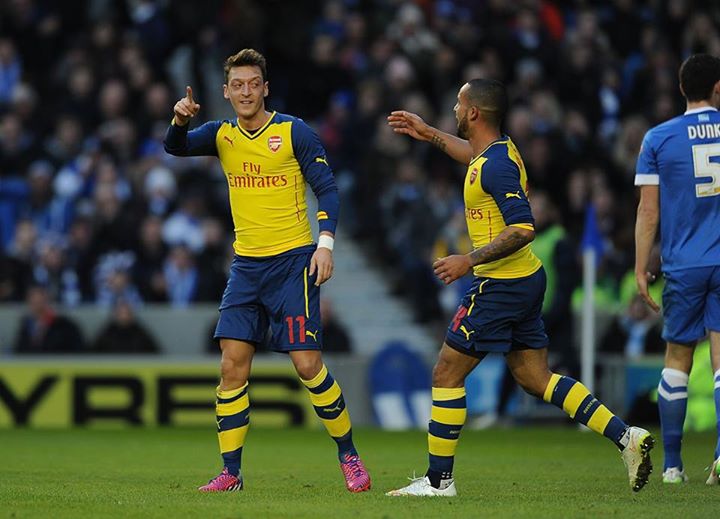 Yes Brighton improved after pulling a goal back at 2-0 down, but this was a solid display from our lads and I never felt we'd lose or even draw.

Encouragingly, both Walcott and Ozil got themselves on the scoresheet which will do their confidence no harm at all, and for the most part we played intelligently and solidly - a continuation of our performance at the Etihad last weekend with a different starting lineup.

Arsenal looked to be cruising to victory at the Amex Stadium after Theo Walcott's opener after 90 seconds and Mesut Ozil's close-range finish put the holders two up at the break.

Brighton, however, twice reduced the advantage to one in the second half as Chris O'Grady and Sam Baldock both found the net either side of Rosicky's superb volley to give the home side hope.

The Seagulls poured forward late on and could have had a penalty when Calum Chambers handled in the box with five minutes to play, but the Gunners were spared and it was the holders who sneaked into the next round.

Arsenal are one of only two teams from the Premier League top six left in the competition after Chelsea, Manchester City, Tottenham and Southampton were all dumped out on Saturday and the Gunners will now fancy their chances of retaining the title they won at Wembley just eight months ago.

The home fans had barely taken their seats before Walcott latched onto Chambers' driven cross and fired a low shot into the far corner for his first Arsenal goal since New Year's Day 2014.

Brighton struggled to find a foothold early on, squandering possession too easily, and they could have been two down when Olivier Giroud met Ozil's corner but the striker's header was blocked.

The Gunners were exchanging possession and positions at will in midfield while Brighton sat deep and watched the game unfold in front of them.

In the 24th minute, Arsenal doubled their advantage as Rosicky ghosted inside from the left and as Brighton worked out who should close down the midfielder, he slid in Ozil, who tucked the ball home from close range.

Brighton could have pulled a goal back just before the half-hour mark when Laurent Koscielny failed to clear Jake Forster-Caskey's cross but Sam Baldock blazed over at the back post in the home side's first meaningful attack.

Arsenal cruised into the break relatively untroubled, but four minutes into the second period the contest was sparked into life.

Chambers failed to clear the ball on the edge of the box and O'Grady seized the opportunity, rolling Mathieu Flamini and driving low past Wojciech Szczesny to give his side a lifeline.

Brighton's goal injected belief and tempo into the home side's play and suddenly it was Arsenal who looked rattled.

The Gunners had a penalty appeal when Gordon Greer appeared to handle Giroud's flick before Brighton were crying foul at the other end when Inigo Calderon took a tumble after a tangle of legs in the box with Koscielny.

Just as Brighton looked to be gaining momentum, however, Arsenal struck again.

Rosicky recovered possession outside Brighton's box, beat two players before playing a disguised pass left to Giroud. The striker chipped the ball back into Rosicky's path and the Czech volleyed past David Stockdale to restore the two-goal advantage.

Arsenal tried to establish some control over the tie but Brighton continued to rally and in the 75th minute, they again pegged their opponents back.

Danny Holla collected possession 25 yards out and the midfielder played a beautifully weighted pass into Baldock, who lifted the ball over Szczesny and into the net for 3-2.

Arsenal had already called for reinforcements, bringing Alexis Sanchez and Chuba Akpom on off the bench, and the pair almost put the tie to bed when the former played in the latter on the break but Akpom was unable to beat Stockdale.

Sanchez hit the crossbar with a bending free-kick with six minutes to play but Brighton came again and could have had a penalty when Adrian Colunga's cross hit the arm of Chambers.

Michael Oliver, however, waved away the appeals and the Gunners held on to book their place in the next round.