Hull 1 Arsenal 4 - Sanchez at the double 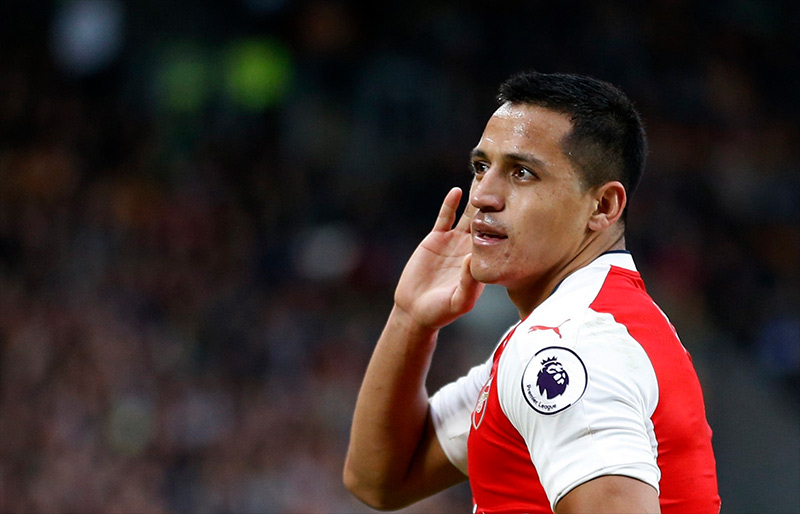 The lads clearly travelled to Hull for today's game in the right frame of mind, but the travelling Gooners would have been in 'which team are going to turn up today' mode.

So often in the not so distant past we've slipped up in matches like this, but today we did the business.

Perez and Xhaka once again started on the bench, prompting some fans to query why we'd paid so much money for them. Perez only came on in the 88th minute, but Xhaka was introduced earlier and certainly made it a game to remember with his superb strike for the fourth goal.

Sanchez bagged a brace, and Walcott got on the scoresheet as well which isn't going to help Wenger and his random team selections.

No matter - three points was essential and the team delivered. Perfect.

Arsenal and Alexis Sanchez continued their fine record against Hull as Arsene Wenger's side won a third straight Premier League match for the first time since December.

The north Londoners were far from convincing in a midweek Champions League draw at Paris St Germain, just days after fortuitously overcoming Southampton, but matters were far more comprehensive at the KCOM Stadium.

Hull have only beaten the Gunners once since 1915 and that poor run was extended on Saturday, with Sanchez's double helping to secure a 4-1 win against a City side who were reduced to 10 men just before the break after Jake Livermore was sent off.

Sanchez has now scored six goals in five matches in all competitions against the Tigers, and got the first of Saturday's contest early on after directing home an Alex Iwobi shot.

Hull goalkeeper Eldin Jakupovic should have done better in the build-up to the opener, but went some way to making amends by denying Sanchez from the spot-kick that followed Livermore's handball.

The midfielder-cum-defender was perhaps harshly sent off and Arsenal capitalised 10 minutes after half-time, with Theo Walcott collecting a clever flick by the impressive Iwobi to clip home

Harry Maguire could only help the goal-bound ball into his own net.

Robert Snodgrass reduced the deficit late on when referee Roger East awarded a penalty, but Sanchez rifled home and substitute Granit Xhaka opened his account in stunning fashion as Arsenal became the first away side to win six competitive matches at the KCOM Stadium.

Mike Phelan, still only in caretaker charge of Hull despite winning August's manager of the month award, stuck with the same starting line-up that had served him so well this term, while Petr Cech and Walcott came in for the visitors.

The latter was soon involved and provided a cross from which Sanchez could only blaze over, but a clumsy save from Jakupovic allowed Arsenal to strike the first blow in the 17th minute.

Francis Coquelin showed impressive awareness after his initial shot was blocked, playing the ball to Santi Cazorla rather than having another effort

Walcott got away a cross-shot that Jakupovic parried into the path of Iwobi, whose shot went in off Sanchez.

Jakupovic superbly stopped Iwobi and watched Mesut Ozil sky the rebound as Arsenal dominated, with Abel Hernandez's strike into the side-netting and a tame Snodgrass effort the best Hull could muster early on.

Home hopes of a Hull comeback faded as half-time approached, with Livermore adjudged to have purposely handed a Coquelin shot.

Referee East pointed to the spot and sent Livermore off, much to the former Tottenham man's shock and the home fans' chagrin.

Anger turned to relief as Jakupovic got down low to impressively save Sanchez's penalty, with the goalkeeper earning more applause after preventing Ahmed Elmohamady from turning into his own goal.

The applause made way for boos at half-time as fans made their anger clear to the officials.

Arsenal made their man advantage count in the 55th minute.

Walcott followed his run after playing the ball to Iwobi, who superbly flicked on for the England international to clip home.

Hernandez hit an acrobatic effort off the crossbar, unaware offside had been called, as Hull attempted to reduce the deficit - which they managed to do in the 79th minute after debutant Dieumerci Mbokani was taken down by Petr Cech.

There was to be no sustained comeback, though, as Sanchez restored Arsenal's two-goal cushion, showing impressive composure after Walcott was denied to rifle into the top of the net.

Xhaka, brought on in the 67th minute, compounded matters in stoppage time