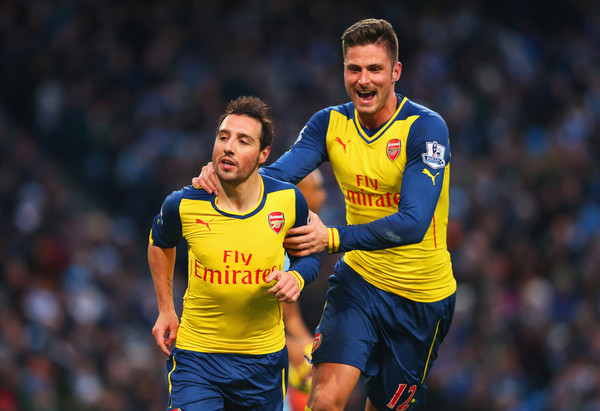 This was our best performance of the season without question.

It became clear very early on that the lads had been given a plan B, with Coquelin told to sit in front of the defence and try to nullify Silva and Aguero. Manchester City were so subdued that Ospina was hardly troubled all afternoon.

With the midfielders doing their job and providing scoring chances, we ran out deserved winners, and ended the hoodoo that these northern clubs have had over us for what seems mlike an eternity.

One swallow doesn't make a summer as we all know, but let's hope that this performance has instilled a small meaure of self confidence in the players, who now know that they can go to places like this and mix it with the best of them.

A mention must go to Santi Cazorla, who was peerless throughout - a pleasure to watch.

Santi Cazorla and Olivier Giroud struck in each half as Arsenal stunned lacklustre champions Manchester City 2-0 at the Etihad Stadium.

Cazorla converted a 24th-minute penalty and Giroud headed home from a set-piece with 67 minutes gone to put a dent in City's Barclays Premier League title defence.

City, despite the return of Sergio Aguero, created little in what was a generally dull game and the result left them five points behind leaders Chelsea with a trip to Stamford Bridge to come in a fortnight.

Arsenal's victory put aside their well-documented recent struggles against top-four opponents and considerably enhanced their prospects of finishing in the Champions League positions this term.

The Gunners were thrashed 6-3 in the corresponding fixture last season and the odds again seemed against them as Aguero and Vincent Kompany returned to the City starting line-up.

But Aguero, who played up front alone in the first half, had a quiet game and City struggled to get anything going even though they dominated possession.

Arsenal looked the more incisive at times and fit-again captain Kompany was made to look rusty.

Kompany's defensive partner Martin Demichelis also had some moments of uncertainty and Arsenal went close to taking the lead from one of them.

Alex Oxlade-Chamberlain seized on a weak Demichelis header and burst down the right before whipping in an inviting cross for Giroud but the Frenchman glanced his header wide.

The Gunners broke through five minutes later as Nacho Monreal attempted to play a one-two with Giroud and was impeded by Kompany as he continued his run into the box.

The Spaniard may have gone to ground easily but referee Mike Dean was in no doubt about the contact and Cazorla took full advantage from the spot.

City were unable to muster a dangerous response despite controlling plenty of the ball.

One good Pablo Zabaleta break yielded nothing and Aguero was off-target with a header from a James Milner cross.

Kompany's frustrating afternoon continued as he was booked for a heavy challenge on Giroud.

City boss Manuel Pellegrini reverted to his default 4-4-2 set-up after the break as Stevan Jovetic replaced Milner and moved alongside Aguero.

The change of approach initially appeared to work and Aguero had their first serious shot with an effort that deflected wide. Jesus Navas was the first to test David Ospina, the deputy keeper again preferred to Wojciech Szczesny, with a powerful effort that was parried away.

But the game also opened up and Sanchez curled an effort across goal after turning Zabaleta out wide. Dean then overlooked two possible fouls on the edge of the City area as a chance opened up for Aaron Ramsey on his return to the side but the Welshman shot over.

City produced another good move but Laurent Koscielny made a vital interception as Navas fired a cross in Aguero's direction.

Arsenal applied the killer touch after 67 minutes after Sanchez was fouled by Jovetic. Cazorla clipped a free-kick into the area and Giroud reacted quickest, losing his marker Fernando to head home in simple fashion.

It was not dissimilar to an Everton equaliser which also cost City points last week and the defending of set-pieces could be a concern.

Sanchez threatened another with a powerful strike from the edge of the area but Joe Hart saved well.

City tried to hit back and Monreal cleared unconvincingly over his own bar but the hosts did not consistently trouble their visitors.

Arsenal efficiently and professionally played out the remainder of the game as City, despite the introduction of Frank Lampard, lacked inspiration.

As in previous years, it appeared the absence of Yaya Toure due to the African Nations Cup had proved costly and City will be anxious to raise their levels when they face Chelsea.