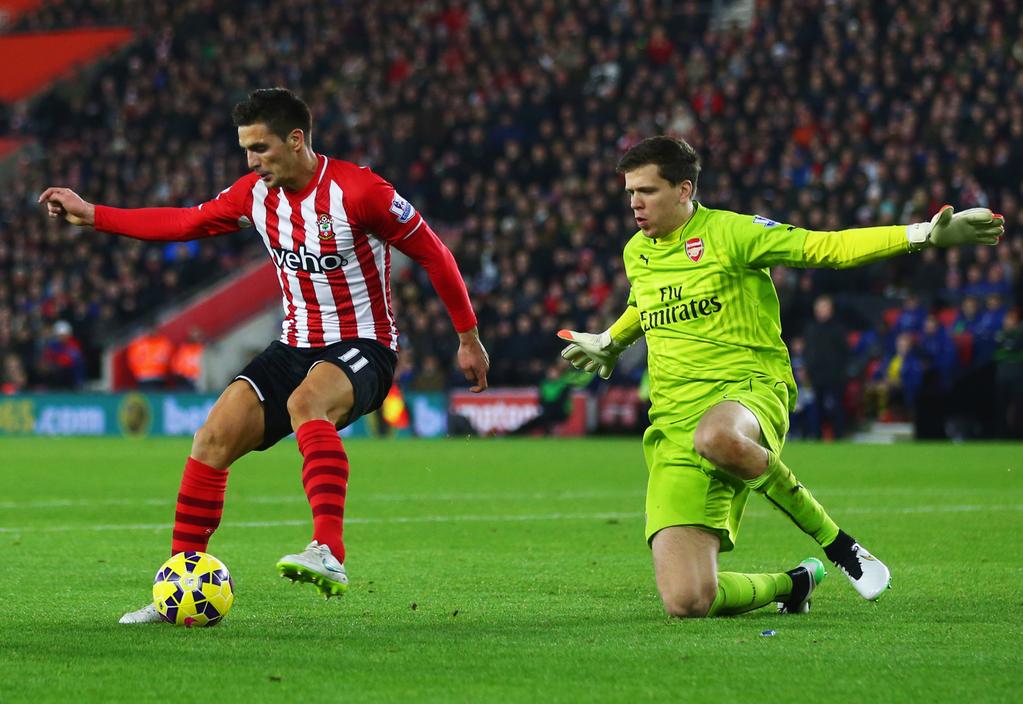 Nothing to say - this was shocking - a snapshot of all our current failings neatly packaged into a ninety minute horror show on the south coast.

We simply must strengthen the squad and get rid of dead wood - but then we've been saying that for 5 years.

The transfer window is now open, and the headlines are all about selling players and not buying. Deja vu methinks.

Szczesny raced out of his area to hand Sadio Mane the chance to chip home, before a weak clearance led to Dusan Tadic's tap-in.

Manager Ronald Koeman has already claimed Southampton can beat Arsenal to a top-four Barclays Premier League finish this term, and the Saints' victory cemented fourth spot and a three-point advantage over the Gunners.

Saints will hope their first league victory over a traditional Premier League power this term will provide the catalyst to chase that unlikely Champions League qualification.

Wenger meanwhile kept sullen countenance on the touchline as Arsenal failed to fire, enduring Saints fans' taunts the Frenchman would be "sacked in the morning".

Arsenal struggled for a true goal threat with Alexis Sanchez deployed as a lone front man in the absence of Danny Welbeck, Olivier Giroud and Lukas Podolski.

The German missed out through groin trouble, but rumours of a rift have increased as the forward eyes a move to Inter Milan.

Arsenal's squad frailties were once again exposed by their lack of an attacking alternative that will no doubt lead to renewed calls for Wenger to act in the January transfer window.

Graziano Pelle should have headed Southampton into an early lead with the game's first real chance.

The Italy striker nodded against the post at point-blank range with Arsenal statuesque in the six-yard box.

Szczesny then flicked a loose ball away from the onrushing Mane to keep the game goalless, and finally Arsenal settled.

Sanchez's roaming threat created space in behind for Arsenal's attacking midfield trio to exploit, only for Santi Cazorla to waste a glorious chance to open the scoring.

The Spain midfielder scuffed his shot despite ghosting on to the penalty spot without any Saints attention.

Cazorla's lack of full connection gifted Fraser Forster a straightforward save as Saints stuck to their defensive duties manfully.

Mane quickly disabused any notions of Arsenal claiming control however, pouncing on Szczesny's costly misjudgement to chip Saints into the lead.

Arsenal's Poland stopper needlessly raced out of his area to deal with a long ball, only to be beaten to the punch by Mane.

The Senegal international nipped in first, spun round the Gunners goalkeeper and chipped home from an acute angle to pilfer the lead with his third goal in as many games.

The former Salzburg player was forced to hobble off with injury minutes later, but his accurate finish kept Saints ahead at the break.

Wenger sat fuming on the bench, shaking his head sullenly in reaction to Szczesny's loose error that gifted Southampton the lead.

Arsenal pressed at the half's death, but a fine sliding challenge from Jose Fonte denied Kieran Gibbs, leaving Saints 1-0 to the good at the break.

Sanchez wriggled into space for a shot in the Saints box, only for Forster to pull off a fine one-handed parry.

In a flash Saints were back on the attack though, with Victor Wanyama lofting a fine ball in behind for Steven Davis.

The midfielder controlled well and chipped into the six-yard box, forcing Mathieu Debuchy to trap, but before the France defender could take another touch Szczesny attempted a weak clearance.

Pelle fired a near-post shot against the post as Saints maintained their pace, while Florian Gardos was booked for taking out Sanchez just outside the box.

James Ward-Prowse wasted a fine chance after losing control with the goal at his mercy, but Saints were still able to coast to victory.