Southampton 4 Arsenal 0 - Too much Christmas pudding 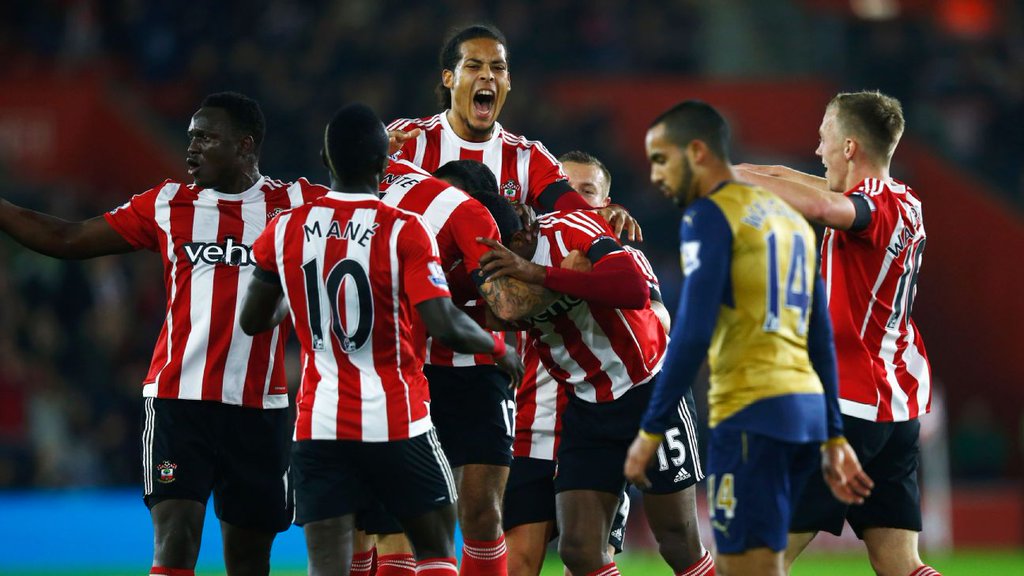 There was not one single aspect of our performance against Southampton that deserves praise. We ambled on to the pitch no doubt assuming that we'd win, and got a proper pasting for our trouble.

Once again we've missed the chance to go top. If we're going to seriously challenge for the title (which is well within our capability) we have to improve our attitude and consistency.

Defensively we were dire - Mertesacker had a shocker, and his lack of pace was exploited countless times. We couldn't keep the ball, and even when we had it we couldn't do anything with it.

Best draw a line under this shocker, hope we get some of our injured players back soon, and hope for better against Bournemouth.

Arsenal could have gone top of the league at Southampton but return home reeling from an embarrassing 4-0 defeat, with Cuco Martina's extraordinary half-volley inspiring another unlikely result in this topsy-turvy campaign.

Monday's victory against title rivals Manchester City continued the Gunners' 100 per cent record in December, strengthening the belief that this could finally be the year they once again win the title.

However, the wait to add to their 2004 triumph could well continue if the Boxing Day defeat to Southampton is anything to go by as Ronald Koeman's men ended a six-match winless streak by romping to victory on a blustery Boxing Day evening.

Martina was the unlikely catalyst to Saints' first win since November 7, with the full-back marking his first Premier League start with an exceptional strike with the outside of his boot from distance.

Offside calls against Steven Davis in the build-up were ignored, as was Laurent Koscielny's appeal for a foul in the build-up to Shane Long's close-range strike 10 minutes after half-time.

Jose Fonte's header and another Long effort late on added extra gloss to the scoreline on a night when Saints' response to recent disappointments was as marked as Arsenal's collapse.

Southampton made four alterations for the north Londoners' visit and changed tack following last week's loss to Tottenham, starting at a slower, more methodical tempo as they looked to firm up at the back.

Olivier Giroud headed over and a bobbling Nacho Monreal shot were the visitors' only attempts of note early on, with Saints' first shot coming in the 19th minute - and what a strike it was.

With offside calls against Davis ignored, the ball eventually fell for Martina and the full-back unleashed an exquisite half-volley from 25 yards with the outside of the boot that flashed past Petr Cech.

Koeman jumped off his bench in disbelief as much as celebration and James Ward-Prowse attempted to extend that advantage, dragging wide and then curling well over.

Davis was unable to connect with a snapshot and Long saw a goal chalked off for barging Per Mertesacker in the build-up, with a booking irking the Ireland forward further.

Arsenal attempted to capitalise as Theo Walcott forced the returning Maarten Stekelenburg into a save, before the inexplicably-unmarked Southampton academy graduate headed wide from a corner.

The Gunners were beginning to knock on the door but Saints threatened to snatch a second before the break, only for Long to lift well over the crossbar after meeting Sadio Mane's clipped pass.

The celebrations were short-lived thanks to the offside flag, but St Mary's soon erupted again and there was to be no halting the revelry this time.

Long led the Saints break and played the ball out wide to Mane, continuing into the box where he met the Senegalese's pass with a low shot past Cech.

Arsenal players were furious with referee Jon Moss for allowing the goal as Koscielny tumbled under pressure from Long in the build-up.

Things would get worse for the visitors in the 69th minute. Saints captain Fonte ghosted in at the near post to nod home a Ryan Bertrand corner, leading a number of the visiting support to head for the exits.

Dusan Tadic forced Cech into action as the home side looked to add extra embarrassment, with Long hitting the post in the 89th minute after flashing past the cumbersome Mertesacker.

Things would get worse in stoppage-time, though, as Long collected Tadic's pass and slotted through Cech's legs.