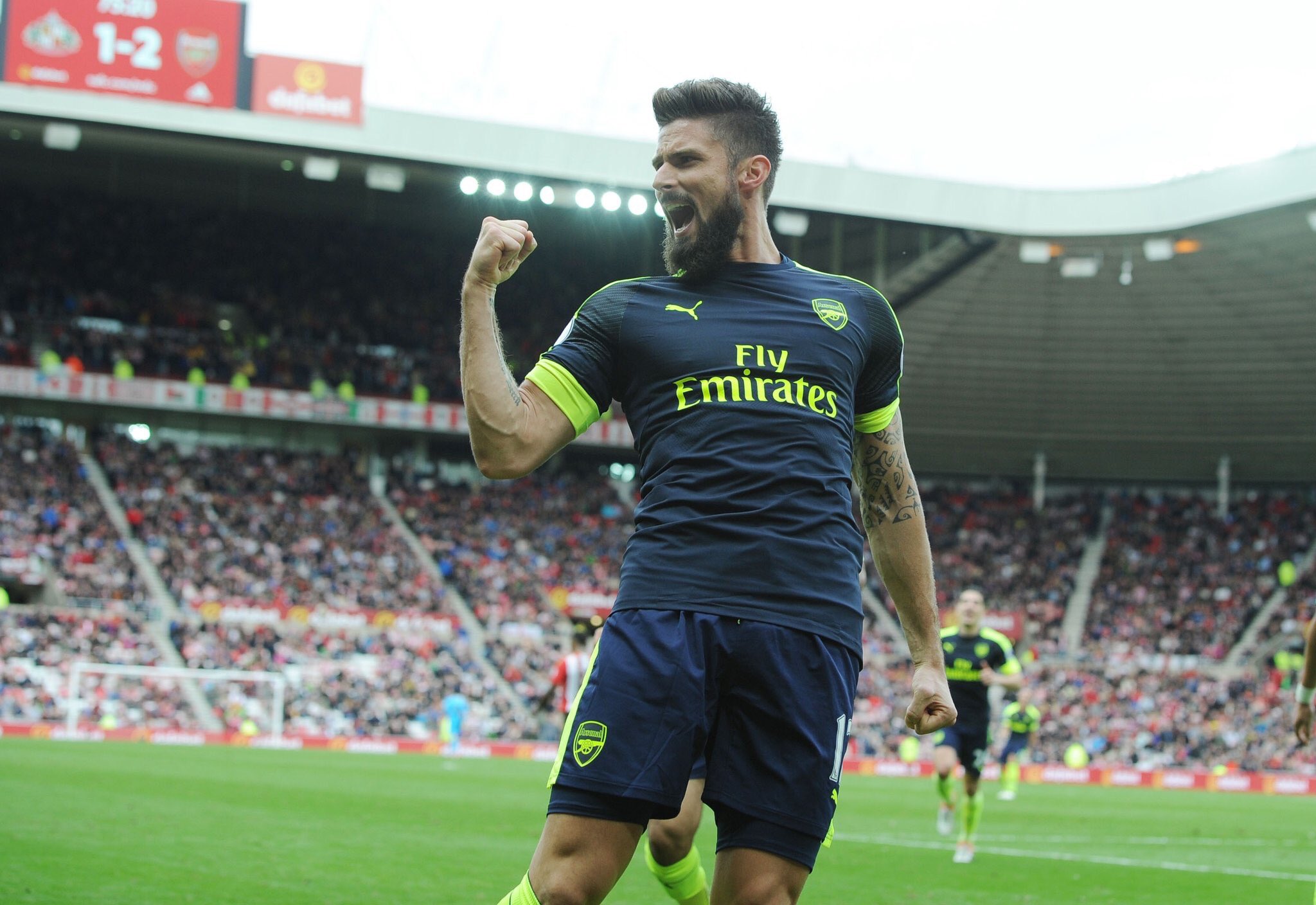 A fantastic header from Sanchez put us one up, and we were waiting for the floodgates to open.

Sunderland surprisingly pulled one back through a penalty and for the briefiest of moments it looked as though we were stuttering, but the home fans joy was short lived as Sanchez and the returning Giroud put them to the sword.

Giroud got two, the first with his first touch of the game, and looked sharp. sanchez was simply in a different class - he ran rings around the pedestrian Sunderland defence all afternoon was should have got more than two.

This means that we can sit back with the three points in the bag and watch our rivals playing catchup all weekend - an enviable position.

Olivier Giroud's first goals of the season handed Arsenal victory and Sunderland a share of an unwanted Premier League record.

The France forward struck twice within five minutes of being introduced as a 69th-minute substitute to kill off hopes of a Black Cats' fightback after Jermain Defoe's penalty had cancelled out Alexis Sanchez's first-half opener.

Sanchez helped himself to a second - the last three goals came inside a chaotic seven-minute period - to leave Sunderland with only two points from their first 10 league games, matching Manchester City's low in 1995-96.

The Gunners, who have now gone 14 games unbeaten in all competitions since the opening day of the campaign, probably should have had the game won by half-time, but beleaguered boss David Moyes was given hope by Defoe's spot-kick, only for the visitors to respond in brutal fashion.

Writing in his programme notes, Moyes had admitted "It isn't easy to be a Sunderland supporter at the moment..." and promised tireless effort in a bid to alter that situation, but the locals among a crowd of 44,322 found the going particularly difficult on this occasion.

The Black Cats showed commendable spirit in the early stages as they set about knocking the Gunners out of their stride.

Sadly for them, they lacked both the defensive resilience and the raw pace to compete when Arsene Wenger's men flexed their muscles, and it was a source of relief that they made it back into the home dressing room at the break trailing by just one goal.

Mesut Ozil had already shot tamely at goalkeeper Jordan Pickford after Sanchez's 13th-minute pass had carved a highway through the home defence, and Francis Coquelin, perhaps astonished by the space he was afforded, allowed himself to be reeled in by Lamine Kone having been played in seconds later.

However, Sanchez put Arsenal ahead with 19 minutes gone when he got ahead of a statuesque Kone to head home Alex Oxlade-Chamberlain's cross, and Sunderland deflated almost immediately.

Ozil should have made it 2-0 seven minutes before half-time after running on to Oxlade-Chamberlain's ball over the top, but did not get enough on his lobbed attempt to let the advancing Pickford and his team-mates off the hook.

Sunderland returned in determined mood, but Oxlade-Chamberlain squandered another golden opportunity after being played in behind a square defence once again and Sanchez was astonished not to be awarded a 62nd-minute penalty after going down under Kone's challenge.

Referee Martin Atkinson, however, did point to the spot at the other end two minutes later after Duncan Watmore had skipped away from defender Shkodran Mustafi and been tripped by keeper Petr Cech, and Defoe obliged from 12 yards to level.

Sanchez nimbly converted from close range after Gibbs' shot had come back off the post to complete a miserable afternoon for Sunderland.