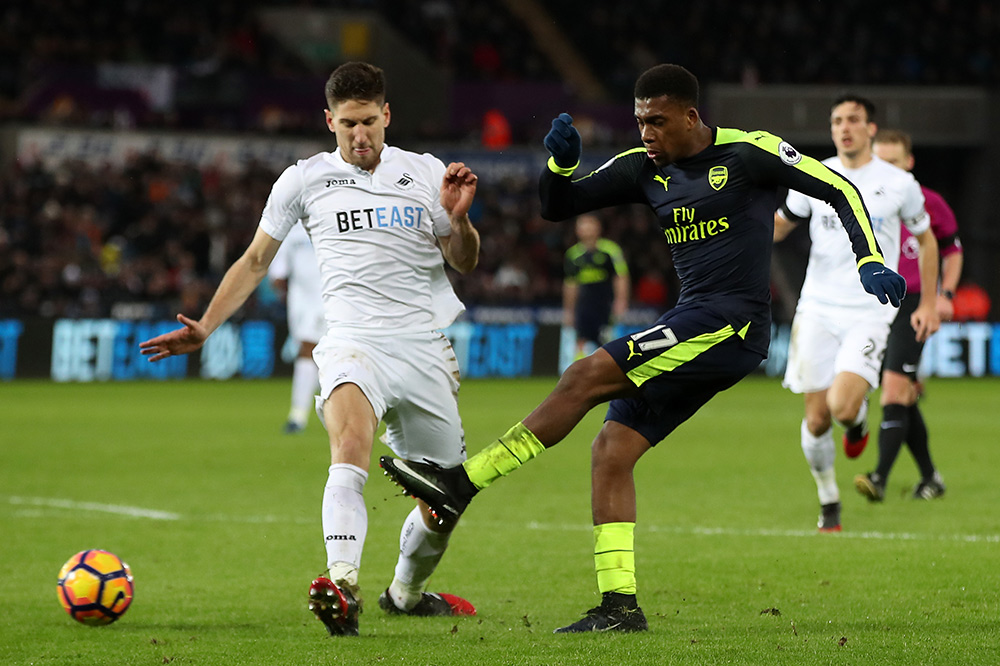 This was a comprehensive away win, thanks in no small way to Swansea's hapless defending.

With our rivals going from strength to strength we needed these points.

As usal we started without a care in the world, and seemingly no appetite to put Swansea to the sword - it's getting a little frustrating.

Olivier Giroud is on fire at the moment, and it was he who broke the deadlock to give us the lead.

Alex Iwobi looked useful throughout, indeed it was two of his efforts that got deflected by Swansea players to put us 3-0 up.

Sanchez got the fourth, and looked predictably fed up when he was substituted. We're assured that it's just the way he is, but is his mind elsewhere? - I don't think so.

At the end of the day it's three points - excellent - but we're not playing cohesively enough to despatch teams of greater stature. Daren't mention Bayern at the moment.

The Gunners had managed only one away league win since the end of October and form on the road was threatening to derail their title challenge, but a comfortable 4-0 victory put them back in the top three on goal difference.

Goals from Olivier Giroud and Alexis Sanchez, sandwiched between two deflected Alex Iwobi strikes credited as own goals to Jack Cork and Kyle Naughton, put them in cruise control and sent Swansea to the bottom of the league.

Clement, Swansea's third manager of a troubled season, had promised organisation on his appointment and the end of the defensive disarray which had marked the end of his predecessor Bob Bradley's short reign.

For the first half Swansea were as good as Clement's word as they fought tenaciously and stopped Arsenal having a meaningful sight of their goal.

But once Giroud, scoring for the fifth successive game, had opened the floodgates after 37 minutes then Swansea's failings were all too evident in a one-sided second half.

What had appeared to be a difficult afternoon for Arsenal turned into a comfortable one as Iwobi strikes looped off Cork and then Naughton, before Sanchez volleyed home his 14th league goal of the season from close range.

Clement's desire for a fast start was realised as Swansea started the game on the front foot and Petr Cech was forced to push Naughton's shot around the post.

Cork and Gylfi Sigurdsson also fired over as Arsenal struggled to hit their stride despite dominating both possession and territory.

Arsenal's attacks mostly headed down cul-de-sacs and their sense of frustration was reflected by Sanchez - as he had done at Bournemouth in the Gunners' last league game - showing dissent to a team-mate at a misplaced pass.

Within seconds, however, Sanchez was switched on to test Lukasz Fabianski with a stinging 20-yard drive at the foot of a post.

Arsenal were hinting at better things and the breakthrough arrived after Giroud had failed to connect with an Aaron Ramsey cross which flashed across the Swansea goal.

Sanchez retrieved the ball on the left and centred where Mesut Ozil found himself unmarked eight yards out.

The German's header struck Alfie Mawson to present Giroud with the simplest of tasks to convert his 10th goal of the season.

Swansea felt they had a lifeline seconds before the interval when Ki Sung-yueng burst into the penalty area and went down under Laurent Koscielny's challenge.

It appeared as if there had been some contact, but referee Mike Jones felt that Ki had initiated it by trailing his leg into Koscielny and booked the South Korean for diving.

Arsenal did not look back after that, despite Ramsey failing to accept Sanchez's shrewd pass when he fired at the legs of Fabianski.

Iwobi benefited from fortunate deflections after 54 and 67 minutes to end Swansea resistance represented by a Wayne Routledge effort, which Cech held well, and Federico Fernandez scooping over.

Sanchez capped his second-half excellence with a predatory finish 17 minutes from time.

It was the fourth time in the last nine league games that Swansea have conceded at least four goals and Clement has a tough job on to save Swansea from relegation.