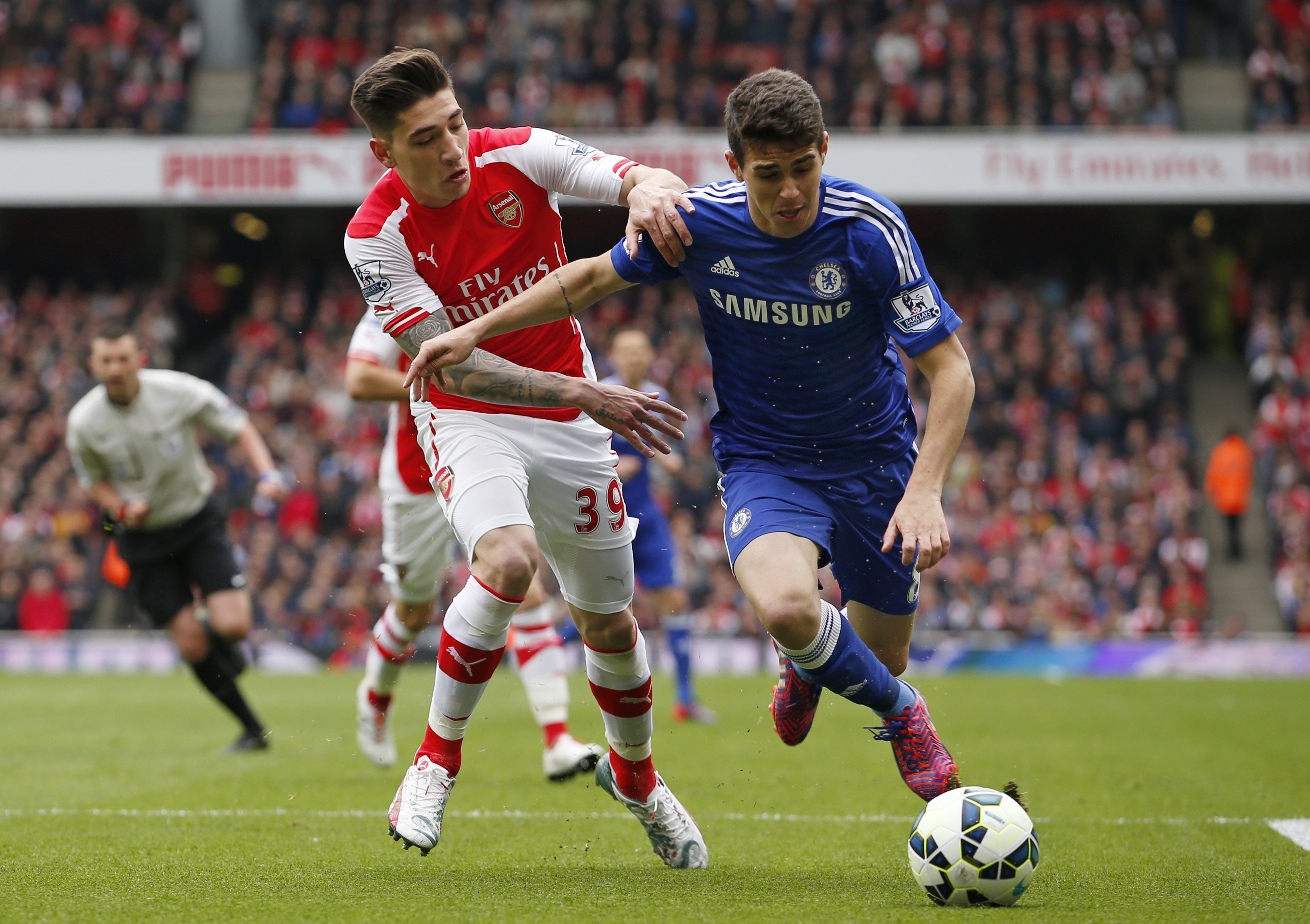 Many Gooners will be slagging Chelsea off for their defensive tactics, but in truth it was exactly what was expected. We lacked the cutting edge to break them down, and Mourinho won the tactical battle yet again.

We played reasonably well and had the lions share of the ball, but today that wasn't enough.

Of course they displayed all the other wonderful facets to their game - trying to kick Sanchez off the park, timewasting, diving - the full set really.

We now have to keep our wits about us and keep delivering solid performances to confirm second place - had we won today things might have been different.

Captain John Terry celebrated passionately as Chelsea edged closer to the Barclays Premier League title after battling through a 0-0 draw at Arsenal.

Chelsea boss Jose Mourinho extended his unbeaten run against Arsenal counterpart Arsene Wenger to 13 matches, and the Blues can wrap up the title in the week ahead with victories at Leicester and Crystal Palace.

Ten points separate leaders Chelsea from the third-placed Gunners, who are level with Manchester City in second but have a match in hand over last season's champions.

Arsenal had plenty of possession in the Emirates Stadium tussle, but once again could not find a way past Chelsea's solid rearguard, the attacking display from the home side failing to really test goalkeeper Thibaut Courtois.

Indeed, Chelsea could feel somewhat aggrieved not to have left with all three points after Oscar's first-half effort was cleared off the line and Ramires failed to make the most of his opportunity.

Arsenal still have second place in their own hands, but they will have to wait until the visit to Hull on Bank Holiday Monday to exert pressure on City and Manchester United in the battle to secure automatic Champions League qualification.

Without any striker in the Chelsea starting XI, Oscar started in a forward central role, supported by Eden Hazard and Ramires while Cesc Fabregas, sporting a protective mask, sat in a deeper role and was roundly booed at every touch by those Arsenal fans who once sang the name of the former captain.

There was a bright start by the Gunners, who had won eight straight Premier League matches

Olivier Giroud - described as a bit of an "animal" by Wenger in the build-up to the match - collected the ball with his back to goal and flicked it over his head, but Courtois was alert to the danger.

Chelsea almost snatched the lead on the counter attack in the 16th minute.A long pass up-field from Fabregas split the Arsenal defence, and allowed Oscar to run clear.

David Ospina rushed off his line, and clattered into the Brazilian, who had touched the bouncing ball goalwards

Hector Bellerin dashed back to head clear off the line and behind for a corner.Those on the Chelsea bench were incensed after referee Michael Olivier declined to award a penalty and red card for what they felt was a foul by the Arsenal goalkeeper.

Mourinho bent the ear of fourth official Lee Mason before walking back into the technical area, shaking his head with a wry grin.Fabregas then went down just inside the Arsenal penalty under a challenge from Santi Cazorla

Referee Olivier was perfectly positioned and signalled for a free-kick against the Chelsea midfielder, who was cautioned for diving - much to the delight of the home supporters.

The Arsenal fans were soon screaming for a penalty at the other end when, after 33 minutes, Bellerin cut the ball back to Cazorla and his rising shot hit the left arm of Gary Gahill at point-blank range

Again, though, the referee waved play on.Chelsea carved Arsenal open when Willian charged down the left flank and played in Ramires, but the Brazilian's first-time flick was too close to Ospina, who got down to make the save.

Just before half-time, a scramble in the Chelsea penalty area ended with Mesut Ozil turning to fire a snapshot straight at Courtois.Chelsea made a change for the second half, with Didier Drogba replacing Oscar, who was said to be suffering from suspected concussion as a result of his collision with the Arsenal goalkeeper.

Despite the switch, Chelsea soon settled back into their rhythm, the visitors happy to break up Arsenal possession and then look to quickly counter.

When Arsenal did get some space on the overlap, Nacho Monreal's low cross from the left was knocked behind by Terry as Sanchez closed in.Willian was booked for a high boot in the face of Koscielny

The deep free-kick into the penalty area caused some panic, with the loose ball dropping back to Per Mertesacker, and the giant German defender dragged his shot well wide.

Arsenal made a positive change for the final 14 minutes as defensive midfielder Francis Coquelin was replaced by Danny Welbeck.Chelsea remained just as difficult to breakdown, with Theo Walcott the next man off the Arsenal bench aiming to inject some life into the closing stages.

Welbeck failed to connect with Monreal's cross through the six-yard box in stoppage time, and the final whistle heralded celebrations from Terry and team-mates, Arsenal's slender hopes of catching Chelsea dealt a huge blow.