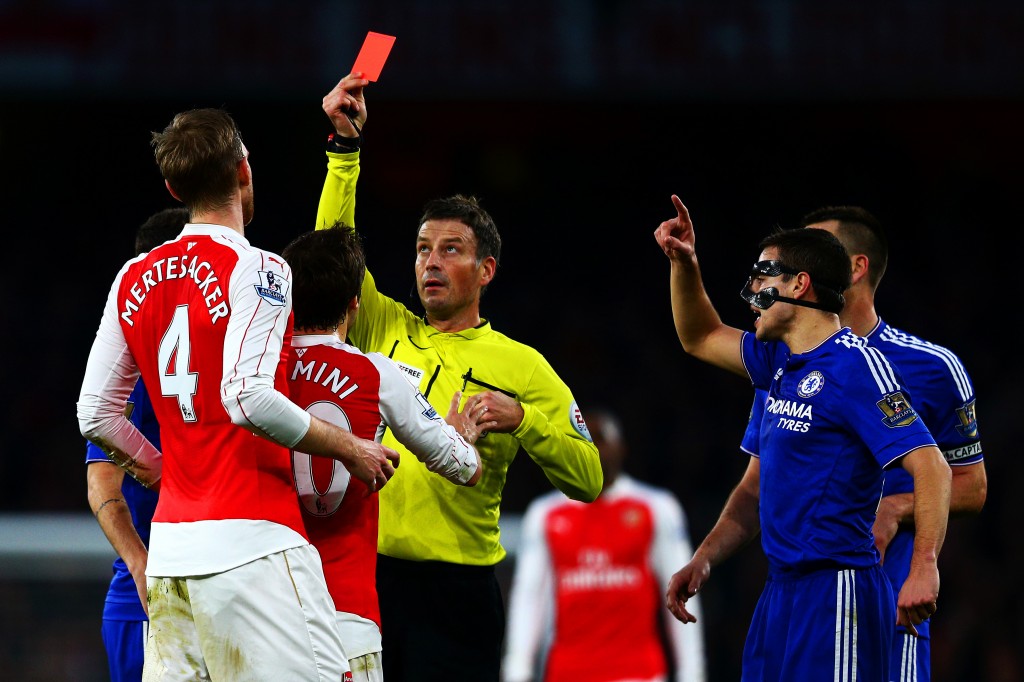 Is is tactical naivety from Wenger? Poor attitude from the players on the pitch? Carelessness?

It was not to be.

Diego Costa was once again the villain of the piece, but this in no way excuses our own lads for not delivering on the day. It has to be said that on current form there's no way we'll win the title despite it being our best chance for years.

Diego Costa once again proved to be Arsenal's undoing with the Chelsea man scoring the only goal as the reigning Barclays Premier League champions beat the 10-man Gunners on Sunday afternoon.

Having tussled with Gabriel and Laurent Koscielny in September's reverse fixture at Stamford Bridge, Costa was again the villain of the piece from an Arsenal perspective as he proved the catalyst in Chelsea's 1-0 win - a result which leaves the Gunners in third behind both Leicester and Manchester City.

The Spain striker's tangle with Gabriel in his side's 2-0 victory earlier in the campaign saw the Arsenal defender sent off and it was Per Mertesacker who saw red this time for bringing down the controversial striker on 18 minutes.

Gabriel came off the bench in place of Olivier Giroud but Costa soon had the ball in the net for the game's only goal as Chelsea moved further away from trouble at the bottom end of the table and put a dent into Arsene Wenger's title bid.

Mertesacker became the fourth Arsenal man sent off in their last five meetings with Chelsea and the Gunners have now failed to beat their London rivals in the league since 2011 - and have not even scored against the Blues in a Premier League meeting for more than three years.

Oscar had the game's first decent chance after being gifted possession by a nervy Laurent Koscielny and his low shot earned the visitors a corner as former Chelsea goalkeeper Petr Cech was forced to push the ball behind.

It was Willian who was next to test Cech, collecting the ball after his initial wayward shot was blocked and sending another effort straight at his former team-mate.

Arsenal were looking to break into the Blues box but Chelsea gained possession and broke forward at pace, with a defence-splitting ball from Willian sending Costa away.

The forward, such a thorn in the side of the Gunners backline, was then sent sprawling by the back-tracking Mertesacker with referee Mark Clattenburg blowing his whistle and showing the German a red card soon after.Costa then made things worse as he popped in between Koscielny and substitute Gabriel to prod home Branislav Ivanovic's tempting cross.

The 27-year-old came close to a second just before half-time but Cech again turned the ball behind, with Ivanovic's header from the resulting corner cleared off the line by Nacho Monreal.

There was frustration for Arsenal on the stroke of half-time as Mathieu Flamini turned Aaron Ramsey's delivery over the crossbar despite being free in front of goal.

The returning Cesc Fabregas had a strong penalty claim turned down early in the second half, with Wenger then turning to Alexis Sanchez from the bench as the Chilean made his comeback after two months out with a hamstring problem.

Costa would soon be withdrawn as Guus Hiddink took the tiring protagonist out of the firing line and replaced him with Loic Remy at the midway point of the half.

Arsenal committed more and more men forward and Ramsey nearly benefited when Thibaut Courtois failed to claim a cross, before Flamini again fluffed his lines when presented with a good chance.

However, Chelsea saw out the remaining minutes to claim three points which move them up to 13th in the table and leave Arsenal's title hopes back In the balance.