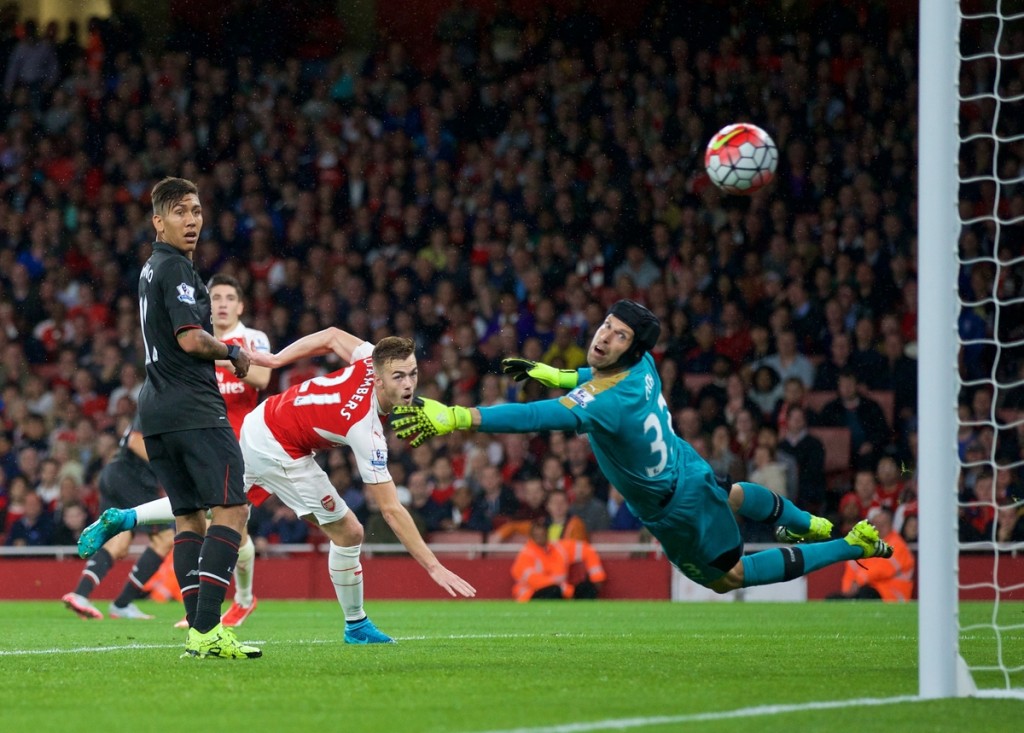 Our stuttering start to the season continues. With Koscielny and Mertesacker both absent we were forced to rely on Chambers and Gabriel at centre back, and whilst both players have their endearing qualities they're not genuinly up to the standard that it takes to win this league.

The strong Liverpool attack gave them a torrid time, and only the presence of Coquelin in front of them prevented this from turning into a far worse night.

As it was we didn't concede largely thanks to Petr Cech, who looked commanding and assured throughout.

In truth though, we're still short of players in key positions - simple as that. When allowed we can play great football but there doesn't seem to be a way for us to impose ourselves on more powerful opposition. Our rivals know this and know how to play against us.

It doesn't bode well for the season.

Both Arsenal and Liverpool enjoyed a half of dominance at the Emirates Stadium on Monday - but neither side could find a winning goal to take the three points.

The visitors will be the more frustrated having started brightly against a Gunners defence severely weakened by the enforced absences of Per Mertesacker and Laurent Koscielny - with Calum Chambers enduring a particularly fraught evening.

But, if Arsenal's defence showed weakness new goalkeeper Petr Cech showed just why Arsene Wenger was so determined to bring him to the club, twice denying Liverpool superbly in the opening 45 minutes, with Brendan Rodgers' side also hitting the woodwork twice.

It was a different story after the break as Arsenal dominated, also hitting the post through Alexis Sanchez and working Simon Mignolet on a number of occasions.

A first-half 'goal' from Aaron Ramsey which was incorrectly ruled offside will rankle the home side, who are without a win or a goal from their first two home games of the campaign, with any move for Karim Benzema apparently dead after the France striker posted a social network message calling Real Madrid 'home'.

Liverpool showed their intent early on with Christian Benteke beating the offside trap as Chambers dropped deep, with the Belgium forward turning provider as he squared for Philippe Coutinho, whose effort came back off the crossbar with Cech beaten.

Arsenal had started slowly but Sanchez threatened as he headed Nacho Monreal's cross over on five minutes before Ramsey saw his effort wrongly chalked off having been slid through by Santi Cazorla - the second time in a week Liverpool have benefited from an incorrect decision by an assistant referee.

Coutinho and Benteke were causing constant problems for Arsenal's new-look defence and the two combined again with the latter shooting straight at Cech from a tight angle.

Chambers gifted possession to Coutinho, only for Francis Coquelin to make a firm challenge, before the defensive midfielder slid in to challenge Benteke with the striker bearing down on goal.Liverpool's captain for the night, James Milner, got the luck of a deflection before testing the Arsenal goalkeeper with a volley.

Coutinho again breached the Arsenal offside trap just after the half-hour mark but this time he was met by a strong challenge from compatriot Gabriel.

Cech has had an unsteady start to life at the Emirates Stadium but he showed just how crucial he can be as he kept out Benteke's close range shot after good work from Coutinho and Roberto Firmino, with the former Chelsea stopper also getting down low to keep out Firmino's drive moments later.

Liverpool were getting closer and only Cech was able to keep them from taking the lead as he made a fingertip save to deflect Coutinho's superb solo effort onto the post.

Arsenal created some chances of their own after the interval, with Sanchez teeing up Olivier Giroud only for the Frenchman to flash a shot well wide of Mignolet's goal.

A free-flowing move followed as Cazorla fed Sanchez, with the Chilean forward hitting the outside of the post as the hosts took over as the side in the ascendency.Mignolet pawed away Giroud's effort before clutching Ramsey's curled shot, before substitute Alex Oxlade-Chamberlain and Gabriel had late chances to win it for the hosts.