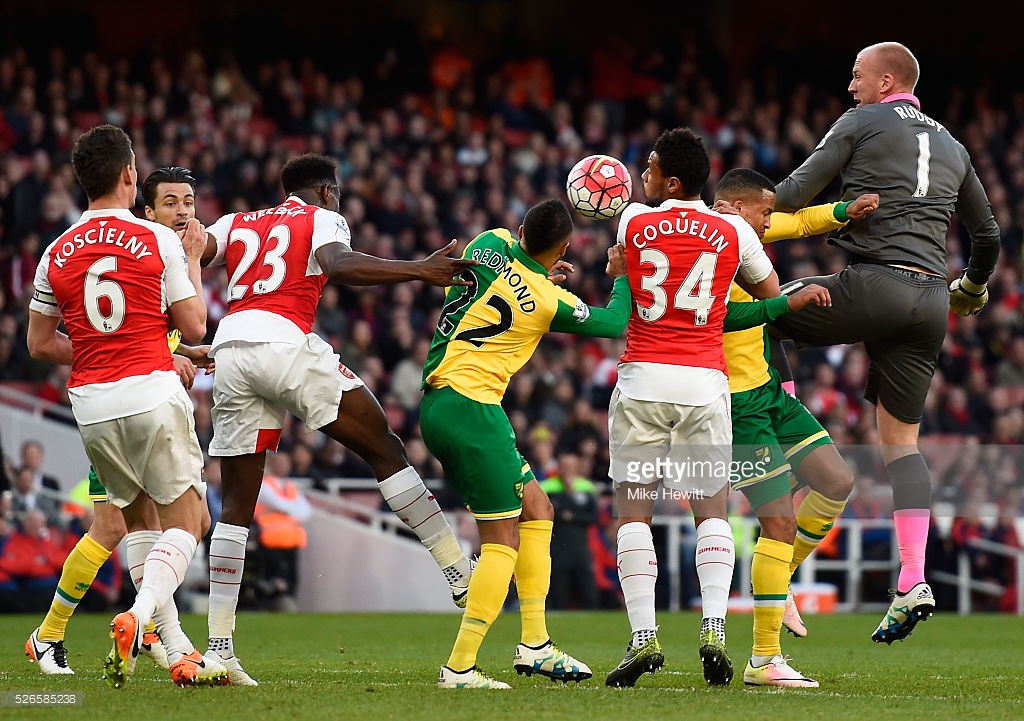 This was a typical poor show. Yes it's the end of the season but for god's sake we're still fighting for league position - or at least we should be!

Clearly nobody told the players.

Even the planned protests against Arsene Wenger were lacklustre, and pretty much a damp squib.

Nevertheless, Welbeck's goal gave us all three points - something we should be happy about given some of the displays against opposition from the bottom half of the table this season.

Meanwhile Leicester can win it tomorrow at Old Trafford - good luck to them, they deserve it.

And Welbeck gave Arsene Wenger reason for cheer and optimism of an 18th successive season in the Champions League with the decisive goal.

The Gunners' clash at Manchester City on May 8 will be crucial in determining their finishing position, while Norwich play at home to Manchester United the previous day desperate for points in their bid to avoid the drop.

Arguments even broke out between rival factions.

There may have been greater agreement had the "Time for change" posters been directed at Giroud, Arsenal's number 12, so abject was his performance.

And the decision to send on Welbeck for Alex Iwobi, instead of the Frenchman, was jeered.

It was soon justified

Giroud met Hector Bellerin's cross with a cushioned header which Welbeck drilled into the corner, three minutes after his introduction.

They have won two of their last 15 league games, with 11 defeats.

Alex Neil's side dropped beneath Newcastle and Sunderland prior to kick-off, when a side showing five changes aimed to respond to the 3-0 loss to the Black Cats.

Nathan Redmond forced Petr Cech to save after five minutes, after a Martin Olsson cross evaded everyone.

Cameron Jerome blasted over before arguments broke out between Arsenal supporters disputing the future of their club.

"There's only one Arsene Wenger" rang around the Emirates Stadium as the 12th-minute protest took place.

There was indecision off the field and on it, as Arsenal dithered around the Norwich penalty area, failing to fashion any real chances.

A deflected Mohamed Elneny effort resulted in a corner and Laurent Koscielny headed over.

Gary O'Neil had an opportunity on the break, exchanged passes with Redmond, but miscued his shot spectacularly over.

Redmond, Norwich's most lively player, made space for a shot which skipped wide.

Redmond tried to create an equaliser, crossing for substitute Dieumerci Mbokani, but Gabriel - on for the injured Per Mertesacker - timed his intervention brilliantly.

Alexis Sanchez shot straight at John Ruddy from a Mesut Ozil pass on the counter attack.

The goalkeeper ventured forward in stoppage time, but Norwich's free-kick barely reached him as they suffered another damaging defeat.