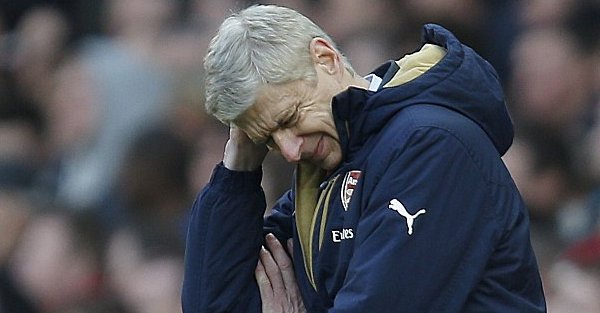 Our strikers can't buy a goal, our midfield are clueless without Santi to provide some quality, and our defence are hapless. FFS even Cech had an off night.

In terms of numbers we're still in the title race, but who in their right mind would think that we can go to The Lane at the weekend and get a result? - Not me for one.

Wenger says 'we must focus on the next game' - no shit Sherlock - but didn't he say that after Sunday's debacle as well? - what the fuck have they been 'focusing on' for the last three days?

Never mind, we'll finish fourth, the money men will be happy, and nobody will be held to account. hardly surprising given that I've seen no indication whatsoever that anyone on the board gives two hoots whether or not we win the title again.

Arsenal suffered a major blow in the Barclays Premier League title race as struggling Swansea came from behind to win at the Emirates Stadium.

The Gunners had a chance to close on leaders Leicester but lost at home to the Swans for the third time in four years to leave Arsene Wenger's men six points off top spot in third place.

Joel Campbell opened the scoring for the hosts in a game they dominated, hitting the woodwork three times over the course of the night, but it was Swansea who were left smiling as Wayne Routledge and Ashley Williams scored the goals to seal a 2-1 win that moves them six points clear of the bottom three.

The visitors went into the game with the disruption of not having head coach Francesco Guidolin on the bench as he was hospitalised with a chest infection.

And his side, managed on the night by Alan Curtis, survived a near-onslaught of their goal as further profligacy from Wenger's Arsenal cost them dear.

Olivier Giroud, now without a goal in 10 matches, was one of the main culprits but it was Sanchez who thrashed against the post with the game's first clear chance.

Campbell's cross was flicked onto Sanchez by Mesut Ozil and after a fresh-air shot, the Chile forward hit the inside of the post - with the ball landing in the hands of former Arsenal goalkeeper Lukasz Fabianski.

Costa Rica international Campbell was back in the side for his first league start in a month and it was he who opened the scoring, sliding in to covert Alexis' pass.

Hector Bellerin then stung the palms of Fabianski, who jumped on the loose ball just in front of the onrushing Aaron Ramsey.

Arsenal, as they have done so often, were soon to succumb to the sucker punch as former Tottenham winger Routledge ran in behind to collect Jack Cork's pass and slide a shot past Petr Cech to level with Swansea's first shot on target.

Wenger, who was on the end of ever-growing discontent from home fans, was left fuming as he felt Jordi Amat had fouled Ozil in the build-up to the leveller, and he was to remain frustrated as Giroud was the next to hit the woodwork - hammering a volley against the crossbar from Per Mertesacker's header down.

The second half began with the same pattern, Sanchez again coming close.

Swansea continued to look to break on the counter as Arsenal's own attacks ended with little end product.

Sanchez's touch still eluded him as he failed to connect with a dangerous set-piece when eight yards out - with Wenger turning to Danny Welbeck from the bench in the search for a second goal.

But it was another former Tottenham man who almost had Swansea ahead as half-time substitute Gylfi Sigurdsson rounded Cech but sent a shot wide from a narrow angle.

Sanchez hit the frame of the goal for a second time as his free-kick beat Fabianski but shook the crossbar.

Then the body blow to Arsenal's title ambitions was delivered in scrappy style by defender Williams.Gabriel fouled Andre Ayew and Sigurdsson's free-kick was missed by Cech, with the ball bundled home by Swansea skipper Williams, as he dragged his side further away from relegation troubles and left Arsenal to rue another poor display.