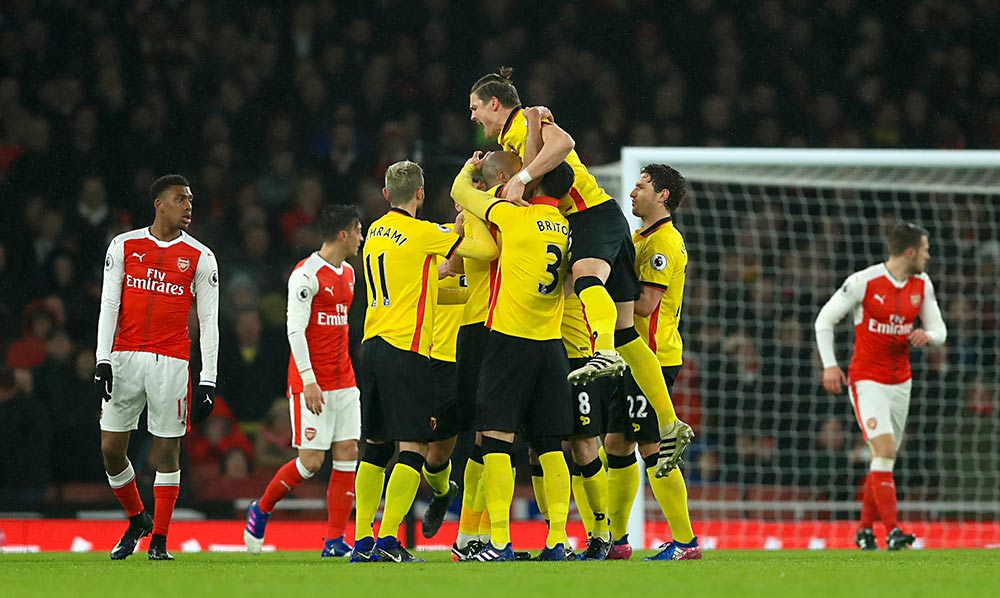 This was truly appalling - two-nil down after thirteen minutes and no fight whatsoever.

With Chelsea travelling to Liverpool, this was a golden opportunity to claw back some points, but given that this was Arsenal it was far from a foregone conclusion.

Wenger in the stands again, Stevie Bould in the dugout, and the wrong starting eleven.

Why on earth were Walcott and Welbeck left out? - they scored five goals between them at the weekend yet we started Giroud. Ozil looked disinterested, Ramsey was a disaster until he went off injured, and Gabriel should have been sold today.

As it was, we improved in the second half, but the usual tippy-tappy passing - some of it misplaced - failed to produce results.

It seemed as though half of the team were playing out of position - what a contrast to our rivals. They must be laughing now.

Shameful, and I dread to think what Chelsea will do to us on Saturday.

The Hornets had not won a league game since December 10 but raced into a two-goal lead courtesy of a deflected Younes Kaboul strike and a Troy Deeney tap-in.

With Arsene Wenger in the stands as he served the second of a four-match touchline ban, the Gunners rallied after a dismal first half but could not build on Alex Iwobi's effort as the visitors hung on for a 2-1 win.

The result was Arsenal's first defeat of 2017 and adds even more significance to Saturday's showdown with leaders Chelsea at Stamford Bridge.

Arsenal's home record this season was exemplary but they were caught cold in the early stages as the Hornets looked to spring a shock.

There was no immediate reaction from the Gunners, and the second Watford goal followed shortly afterwards as Etienne Capoue broke forward, eased past Mustafi and, although his effort was saved by Cech, Deeney was on hand to snaffle home the rebound.

Arsenal's problems increased as Ramsey was forced off through injury with a little over 15 minutes on the clock, Alex Oxlade-Chamberlain coming on in his place.

The Gunners thought they had a penalty when Nacho Monreal went down in the box but referee Andre Marriner booked the Spain full-back for simulation.

Heurelho Gomes remained untested in the visitors' goal but Cech was forced into action as he tipped Sebastian Prodl's far-post header behind for a corner.

Cech had to be at his very best just moments later to palm away a fierce effort from Niang as Watford once again stole possession deep in Arsenal territory.

A cacophony of jeers met the half-time whistle as Arsenal fans vented their frustrations, although half-time substitute Theo Walcott offered some hope with a decent strike on goal shortly after the interval.

He then had Arsenal's first shot on target as Gomes turned it behind off his legs before then saving superbly from Iwobi.

Alexis Sanchez saw his own penalty appeal turned down but was then on hand to cross for Iwobi to steer a finish back past Gomes and get the hosts back into the contest.

The expected siege on the Watford goal never truly materialised although Lucas Perez rattled the crossbar with a rasping drive.

And, despite having scored six goals in the 90th minute or later this season, Arsenal could not produce late heroics here as Watford, who had sold misfiring striker Odion Ighalo to Chinese Super League side Changchun Yatai earlier in the evening for £20million, sealed a vital win for manager Walter Mazzarri.