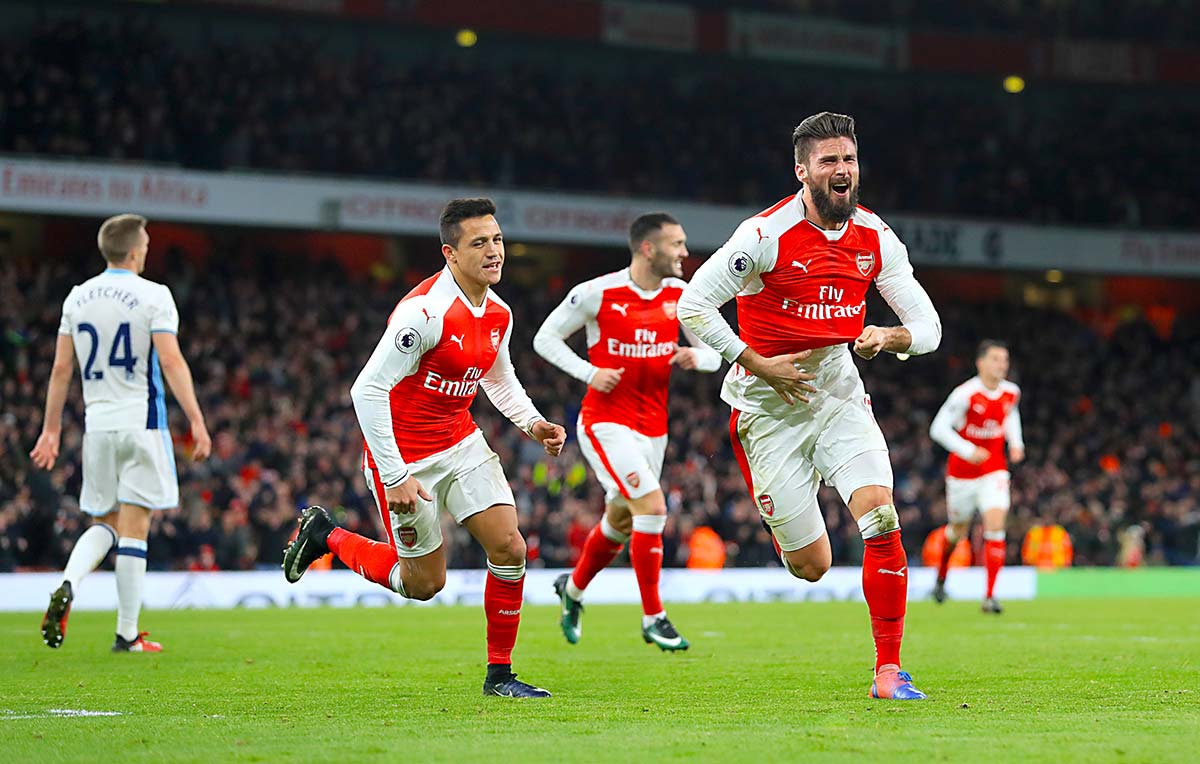 Any team that Tony Pulis brings to The Emirates is never going to be playing good football, certainly not good in the expansive sense anyway.

Quite why Wenger started with both Coquelin and Xhaka in the side is beyond me, given that they were never going to face any serious attaking threat, but anyway...

The longer the game went on the less likely we looked to score. We were doing all the usual tippy tappy stuff but with no penetration. Olivier Giroud stepped up to grab the vital winner five minutes from time, and all of a sudden the visitors - Foster in particular - stopped wasting time and pushed up.

The Pulis tactis didn't pay off though, as we took the victory after four minutes of injury time.

This could prove to be a vital three points.

Olivier Giroud marked his first Premier League start of the season by heading home a late winner as Arsenal eked out a 1-0 victory over a resolute West Brom.

It had looked for 86 minutes as though Tony Pulis' game-plan would work to perfection as the visitors limited the Gunners to only a handful of chances, with Ben Foster on top form in the Baggies' goal.

But it would be Giroud, largely a bit-part player for Arsene Wenger this season, who headed home Mesut Ozil's cross to secure a much-needed Boxing Dy triumph for the hosts.

Wenger spoke of being "immune to excessive reactions" following back-to-back losses but he would likely have come in for further stinging criticism had his side been held by a spirited West Brom.

Alexis Sanchez, starting out wide with Giroud handed his first league start of the campaign, flashed a shot wide with 15 minutes gone as West Brom's defensive unit kept their hosts at arm's length in the early stages.

A last-gasp challenge from Jonny Evans prevented Giroud getting through on goal as Arsenal continued to pressurise without testing Foster.

For all their defensive effort, Pulis' side almost took the lead as Salomon Rondon flicked on Nacer Chadli's cross, only for Petr Cech to save.

Arsenal went straight down the other end and finally got a shot on target as Sanchez stung the palms of Foster with a drilled effort from the edge of the box.

The Gunners trudged off frustrated at the break but should have been ahead soon after the restart only for Foster to pull off a great double save, parrying Alex Iwobi's strike and then keeping out Sanchez's follow up.

He could do nothing as Sanchez thrashed an effort goalwards from the resulting corner, but the shot hit the woodwork and stayed out.

The former Manchester United goalkeeper was on hand once again to tip Sanchez's dipping shot behind as Arsenal came closer and closer to breaking the deadlock.

Giroud was the next man to be denied by Foster, who used his feet to divert the Frenchman's low shot away from goal.

West Brom should have snatched the lead with a little over 20 minutes remaining but Claudio Yacob could only flash a shot high and wide when a corner dropped to him at the far post.

Wenger shuffled his pack and introduced Lucas Perez and Aaron Ramsey from the bench, while Nacho Monreal also came on for the injured Kieran Gibbs.

Perez almost had an immediate impact as his low cross flashed across goal with Giroud close to tapping home from almost on the goal-line.

But it was Giroud who would make his mark, heading home his sixth goal of the season as Ozil celebrated his 100th Premier League appearance with a vital assist.

The win keeps Arsenal nine points behind leaders Chelsea and out of the clutches of Tottenham and Manchester United, who are looking to break into the top four.