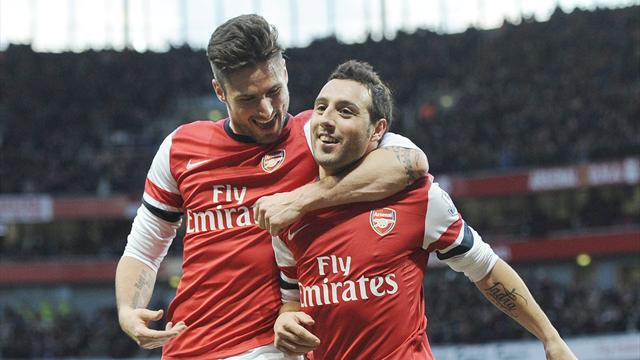 We started strongly but soon lapsed into mediocrity.

It was goalless at half time, but thankfully we came out for the second half with a little more attitude. Santi Cazorla got both goals, and Fulham never looked like getting anything from the game.

In reality we should have put them to the sword and tried to get our goal difference somewhere near that of Man.City, but that's something we rarely do. I'm sure that Arsene tells them to do just enough and no more.

Anyway - still top of the league.

Spain midfielder Santi Cazorla struck twice in the second half as Arsenal beat Fulham 2-0 to stay ahead of Manchester City at the top of the Barclays Premier League.

With free-scoring City romping to another big home win as Cardiff were the latest side put to the sword at the Etihad Stadium, there was little margin for error from Arsene Wenger's men, who hold a slender one-point lead.

After a slow first half, the Gunners finally sparked into life as two quick goals from diminutive Spaniard Cazorla gave them what was in the end a comfortable victory.

Fulham - who made the expected sweeping changes from their midweek FA Cup third-round replay win over Norwich - had never won in any competition at Arsenal, losing 22 of their trips so far to north London.

The visitors were almost behind on five minutes when Jack Wilshere played Mesut Ozil into the right side of the penalty area, and his scuffed shot rolled past fit-again goalkeeper Maarten Stekelenburg, but was hacked clear by captain Brede Hangeland, making his first league start since October after back surgery.

Arsenal continued to attack, but were met with a determined wall of dark blue shirts at the edge of the Fulham penalty area.

Former Gunners trainee Steve Sidwell went in heavy on Wilshere to concede a free-kick in a central position some 25 yards out.

Ozil, though, crashed his shot into the wall.

German teenager Serge Gnabry, stepping into the side following Theo Walcott's season-ending knee injury, fed Olivier Giroud at the edge of the 18-yard box, but the France striker fired the ball high and wide.

Fulham finally came to life on 20 minutes when the ball dropped to Sidwell at the edge of the Arsenal penalty area. The midfielder fired in a superb half-volley which Wojciech Szczesny beat away one-handed as it flew towards the top-right corner.

The Poland international then had to get his timing inch-perfect as he came out to save at the feet of Ashkan Dejagah as Fulham pressed again.

Clever footwork from Cazorla after a quick free-kick saw the Spaniard brought down just outside the penalty arc.

Ozil stood over the ball, but left it for Cazorla, whose low strike came off the bottom of the wall, rebounding to Bacary Sagna. His shot was saved as was Giroud's follow-up, but the offside flag had been raised.

There was a scare for Arsenal at the start of the second half as Fulham defender Dan Burn, making his Premier League debut, sent a header goalwards from a corner, but Per Mertesacker was well placed to clear.

Slowly Arsenal regained their dominance, but continued to be frustrated by a lack of a decisive pass to open up the stubborn visitors.

Gnabry continued to look lively and made space for a shot at the edge of the Fulham box which Stekelenburg pushed wide.

The Cottagers goal continued to lead a charmed life as both Cazorla and Gnabry saw close-range efforts blocked before Laurent Koscielny hit the post.

Arsenal finally had the breakthrough on 57 minutes when the ball was worked by Giroud to Wilshere in the left side of the crowded penalty area and he cut it back to Cazorla who drilled his shot into the bottom right corner.

Before Fulham could regroup, they were 2-0 down.

Nacho Monreal's cross from the left was headed out by Burn, and the ball dropped to Cazorla.

There was some concern when Giroud went down clutching his ankle following a sliding challenge from Sidwell, but the France forward was able to continue after treatment.

With 20 minutes left, Gnabry was given a break as fellow German Lukas Podolski came on.

The substitute almost had an instant impact as his angled shot was blocked by Sascha Riether and then saw a rasping 20-yard drive touched on to the post by Stekelenburg.

Fulham forward Darren Bent, on for Dejagah, almost continued his good form against Arsenal when clear through after the ball bounced off Szczesny, but could not cut his shot back into the empty net as Koscielny slid in.