Arsenal 2 Liverpool 1 - A Specialist in revenge 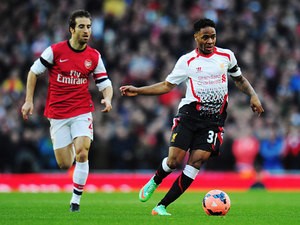 Arsenal avenged their Anfield aberration with a 2-1 defeat of Liverpool in a pulsating FA Cup fifth-round clash at the Emirates Stadium.The Gunners, still reeling from last weekend's 5-1 Premier League loss at Liverpool, twice scored in the opening 50 minutes despite being second best before surviving a second-half onslaught to set up a home quarter-final with Everton.Arsene Wenger was described as "a specialist in failure" by Chelsea's Jose Mourinho on Friday after last leading Arsenal to a trophy almost nine years ago, in the 2005 FA Cup, but now his side are in the last eight

The Blues are out

Arsenal conceded four times in the opening 20 minutes at Anfield and might have gone behind twice in the opening five minutes on Sunday.Both chances fell to Daniel Sturridge, who was unable to add to his nine goals in the previous eight games, before Alex Oxlade-Chamberlain put Arsenal in front.Lukasz Fabianski was alert to deny Luis Suarez an equaliser and Arsenal broke to double their advantage when Oxlade-Chamberlain turned provider for Lukas Podolski.The Germany forward then tripped Suarez and Steven Gerrard converted the resulting penalty.Howard Webb might have awarded Liverpool another spot-kick when Oxlade-Chamberlain made a late challenge on Suarez, but the Uruguayan's amateur dramatics did him no favours.Daniel Agger headed wide of an open goal in the 87th minute when Fabianski failed to meet Gerrard's free-kick and Arsenal held on to advance to jubilant scenes in north London.Wenger's team selection suggested Wednesday's Champions League last-16 tie with Bayern Munich was his priority as he made seven changes from the side which began the dour goalless draw with Manchester United.Yaya Sanogo made his first start and only Per Mertesacker, Laurent Koscielny, Mesut Ozil and Mikel Arteta - suspended in Europe - were retained against a Liverpool side unburdened by continental competition this term.Brendan Rodgers' men showed their Premier League title credentials at Anfield and threatened to tear through the Gunners again.First Gerrard slid a pass through to Sturridge, who shot into Fabianski's legs when he should have done better.Then Suarez lofted the ball over a static Arsenal defence and, with angle always becoming more acute, Sturridge fired into the side-netting.The Reds found themselves behind when they cleared a corner only as far as Ozil, who turned the ball back into the area.Sanogo brought it down on his chest and had a shot blocked by Gerrard, but the ball broke for Oxlade-Chamberlain for a composed finish.Flamini, back from a three-match ban, was shown a yellow card for a late tackle on Gerrard, becoming the fourth player booked in a feisty first half.The hosts survived after threatening runs from Raheem Sterling and Suarez, who saw a volley across goal saved by Fabianski.Arsenal had few moments of respite and had a promising counter-attack brought to an abrupt halt when Gerrard was booked for tripping Oxlade-Chamberlain, who was the hosts' most-threatening attacker in the first half.Suarez, with one goal in his previous six games, was denied by the feet of Fabianski in the opening seconds of the second half and was made to pay.Carl Jenkinson won the ball on the right win and Arteta fed Oxlade-Chamberlain who broke down the wing and cut the ball back for Podolski to tuck in.Still Liverpool looked the more dangerous side.A Suarez shot dipped narrowly over before Ozil forced Jones to save sharply at the other end.Sturridge was denied by Fabianski before Podolski clumsily tripped Suarez from behind and Webb pointed to the spot.Gerrard sent Fabianski the wrong way.The Poland goalkeeper had to get his timing spot on and did when Sturridge attempted to round him moments later following a defence-splitting Philippe Coutinho pass.Liverpool appealed for another penalty when Oxlade-Chamberlain mis-timed his tackle on Suarez, whose exaggerated tumble meant Webb was unmoved

Replays suggested the official was wrong

Liverpool introduced Jordan Henderson, who underwent a small operation on a wrist injury on Thursday, and continued to pore forward, with Suarez becoming increasingly influential and twice testing Fabianski

Arsenal were playing on the counter-attack and substitute Santi Cazorla wasted a good opportunity set up by Oxlade-Chamberlain, who was then tripped by Gerrard

Sturridge tied Fabianski's boot laces to ensure the goalkeeper had little time to waste, but that was as close as Liverpool got to Arsenal's goal in stoppage time as the Gunners progressed