Arsenal 2 Reading 0 - The Ox at the double 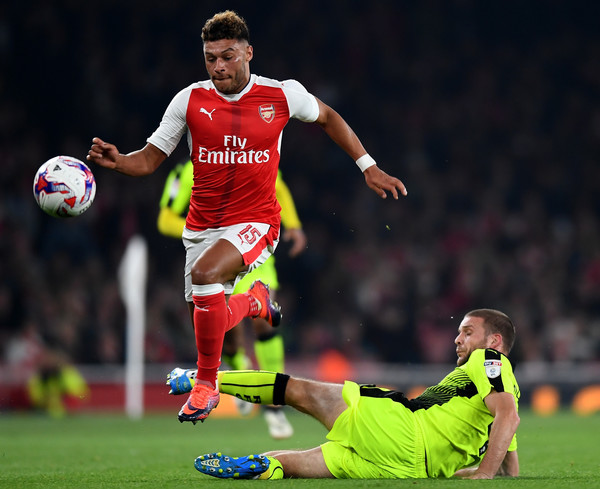 Alex Oxlade-Chamberlain staked a claim for a more regular involvement in the Arsenal side as he struck a brace to see off Reading in the fourth round of the EFL Cup.

The England winger recently expressed his unhappiness at his lack of game time at the Emirates Stadium and had completed 90 minutes on just two occasions this season heading into the clash with the Royals.

Despite not featuring as much as he would like, Oxlade-Chamberlain has now scored five goals this season - his best return since he joined in 2011 - as he struck in either half to give Arsene Wenger's much-changed side a 2-0 victory and a place in the last eight of the competition.

There was little to remind those inside the stadium of the memorable 7-5 Arsenal win over Reading in this competition back in 2012 - with a first Gunners' start in 898 days for Carl Jenkinson one of the highlights of the night.

After two loan spells at West Ham and a serious knee injury, Jenkinson almost had a dream return and should have opened the scoring after he was picked out by Jeff Reine-Adelaide - but his initial shot was pushed out by Ali Al-Habsi and then he headed the rebound over the bar.

Oxlade-Chamberlain flashed a shot wide of Al-Habsi's post moments later after good work from Alex Iwobi freed him on the left-hand side of the Reading box.

Lucas Perez broke through on goal for Arsenal but the summer signing opted to look for a pass across goal to Reine-Adelaide rather than take on the shot, and the ball was instead hacked clear by the Reading defence.

Iwobi then shot wide before Mohamed Elneny fired into Al-Habsi's arms as Arsenal began to get on top in the contest - and they soon made their supremacy count.

Reading surrendered possession from their own goal-kick and Oxlade-Chamberlain latched onto the loose ball before finishing low past Al-Habsi to open the scoring.

The Championship visitors came close to levelling just before the interval as Callum Harriott's strike from outside the box deflected off Gabriel, wrong-footing Emiliano Martinez but landing on the top of the net.

Oxlade-Chamberlain and Perez both saw early second-half efforts deflected behind as Arsenal looked to double their lead, with Martinez making a smart stop from Reading substitute Yann Kermorgant's header just after the hour.

Wenger introduced Olivier Giroud for his first appearance since the 3-0 win over Chelsea a month ago and the Frenchman almost scored with a bullet header, with Al-Habsi making a good stop to prevent the forward opening his account for the campaign.

Oxlade-Chamberlain should have had a second but again Al-Habsi was in the way, before Iwobi scuffed the rebound when he could easily have swept Arsenal further in front.

The Oman international goalkeeper tipped over an Iwobi drive but was powerless to prevent Oxlade-Chamberlain wrapping up the win with a driven shot which deflected in off Jordan Obita.