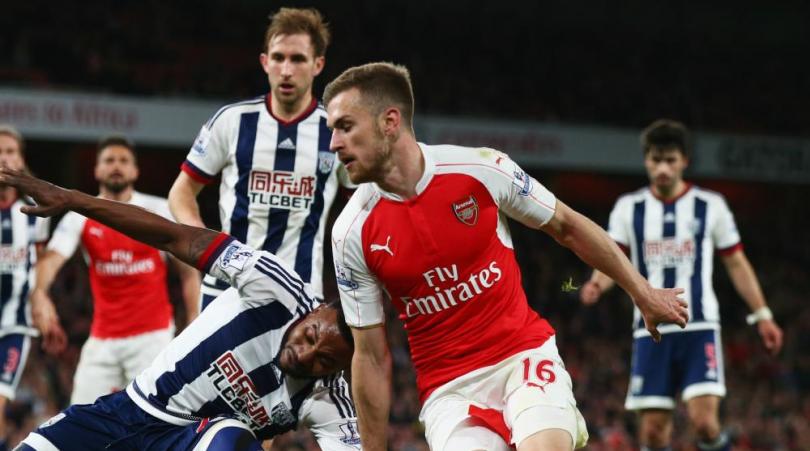 Alexis Sanchez scored a brace as Arsenal moved up to third in the Barclays Premier League with a victory over West Brom on a night when there were plenty of empty seats inside the Emirates Stadium.

Reports leading into the game suggested as many as 2,500 season-ticket holders had sent back their tickets, with seats on general sale as many stayed at home in protest against a poor season and some unhappy that Arsene Wenger remains in charge after another faded title challenge.

But, on the pitch, the hosts recorded a much-needed 2-0 win to pull clear of the chasing pack and leapfrog Manchester City into third spot as they look to secure Champions League football for a 20th consecutive campaign.

Sanchez struck twice in the first half in front of the official figure of 59,568 fans, but in reality the attendance was much less than that as the club count the number of tickets sold rather than the figure coming through the turnstiles.

Those fans who had made the journey were rewarded as early as the sixth minute as Sanchez turned Sandro before arrowing a low drive past Ben Foster for his fourth goal in as many games.

The hosts had their tails up and only a brave block from Jonny Evans kept out Mesut Ozil, with the recalled Aaron Ramsey volleying the rebound wide.

While West Brom continued to sit back, Arsenal retained possession without creating a further chance until past the midway point of the half when Hector Bellerin, named in the PFA Team of the Year earlier in the day, broke into the box and flashed a shot just wide.

A couple of advanced set-pieces allowed the Baggies to exert a little attacking pressure and it almost paid off as Gareth McAuley broke clear of Ozil's lazy marking to head James McClean's corner onto Petr Cech's crossbar.

A neat interchange between Ramsey and Bellerin allowed the latter to cross in for Ozil, whose tame shot squirmed through Foster's legs - with the England goalkeeper having his blushes spared by Craig Dawson mopping things up on the line.

But the Gunners did not have to wait much longer for the second as Sanchez bent home a precise free-kick through a less-than solid West Brom wall after Ramsey had been felled by Claudio Yacob.

The quiet Olivier Giroud drew a routine save out of Foster at the start of the second half before McClean's far-post header was kept out by Cech.

Vardy's second yellow was for simulation but Moss was in no mood to book Arsenal midfielder Mohamed Elneny despite a clear dive inside the Albion box.

Baggies' half-time substitute Salomon Rondon could not react quick enough to Craig Gardner's corner after it evaded everyone to fall to him at the back-post.

Wenger introduced Francis Coquelin, Joel Campbell and Theo Walcott towards the death but it was Giroud who flickered into life as he tested Foster with a late strike - with Arsenal easing over the line.