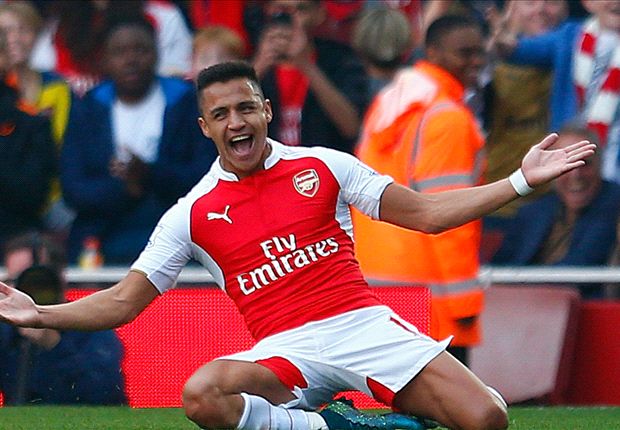 We came out of the blocks at a tremendous pace and for United the game was all over inside twenty minutes. The performance was more than the home fans could have hoped for - after all we were still reeling from the dire display in midweek.

This moves us to second in the table, and domestically we're looking good - onwards and iupwards!

The Gunners came into Sunday's encounter on the back of a disappointing home Champions League defeat to Olympiacos and with the spotlight firmly back on manager Arsene Wenger.

However, Arsenal tore United apart with two early goals in the space of 74 seconds, a backheel from Sanchez and a cool finish by German playmaker Mesut Ozil, with Sanchez cracking home a superb third to put the game to bed after only 20 minutes.

United improved in the second half, but it was too little too late.The impressive victory moves Arsenal above United on goal difference, and they are now only two points behind new leaders Manchester City heading into the international break.

Wenger had called for a response from his side - and that is exactly what they delivered with a blistering start.Arsenal were on the offensive from kick off and swept ahead after just five minutes.

Aaron Ramsey fed Ozil down the right channel, the German World Cup winner ghosting through the penalty area before cutting the ball back to the near post.

Sanchez arrived on queue ahead of the defenders to backheel a sublime finish past David de Gea.Before United could regroup, they were immediately opened up again.This time it was down the left, with Walcott dashing past Daley Blind

The England forward played a ball back out to Ozil, who was waiting patiently on the penalty spot to dispatch a cool sidefoot finish into the bottom left corner.

Following the electric start, the tempo of the match dropped, as United look to build a spell of possession.It was, though, only a brief respite before Sanchez delivered a world-class finish to put Arsenal 3-0 ahead.

Another quick break found Walcott, who in turn fed the ball out to the left.Sanchez brushed off the challenge of Matteo Darmian before sidestepping Chris Smalling and firing the ball into the top-right corner.

It was now a case of damage limitation for Louis van Gaal's men, who had come into the match on the back of three straight league wins.

Arsenal should have moved further ahead on 34 minutes when Sanchez chipped a ball over to Aaron Ramsey unmarked at the far post, but the Wales midfielder could only blast his shot high into the Clock End.

Arsenal continued where they had left off at the start of the second half, with Ozil flashing a low drive just wide following a free-kick.

At the other end, Cech got down well to turn a low, curling shot from Wayne Rooney behind before then coming out to make a brave block at the feet of Bastian Schweinsteiger.

During the closing stages, Sanchez was forced off with what looked like a groin problem.

In stoppage-time, Arsenal substitute Alex Oxlade-Chamberlain was unfortunate not to make it 4-0 when his angled chip floated over the keeper, but hit the crossbar