Arsenal 4 Watford 0 - Too late to the party? 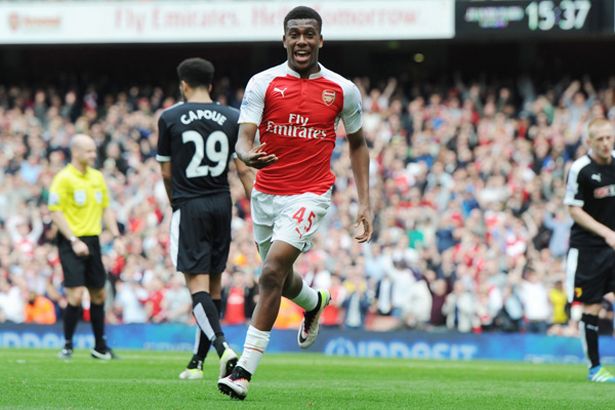 Arsenal put in one of their most dominant Barclays Premier League displays of the season on Saturday to beat Watford and keep their title ambitions alive.

The Gunners, 11 points off top spot at kick-off, needed to take advantage of the fact they played earlier in the weekend than leaders Leicester - and they did so with an emphatic 4-0 win at the Emirates Stadium.

Alexis Sanchez got the ball rolling, scoring just his second league goal of 2016, with the impressive Alex Iwobi adding a second before Hector Bellerin's first goal in almost a year, and a late strike from substitute Theo Walcott secured a comfortable three points.

Wenger named the same side that had won at Everton before the international break and saw Arsenal start in a similar fashion as they again opened the scoring early on.

In fact the hosts were ahead with their first meaningful attack of the game, Sanchez putting away the loose ball in the fourth minute after Heurelho Gomes had kept out his initial header from Iwobi's dinked cross.

Sanchez broke forward to create the next decent chance, for Welbeck, but the England international did not make great contact with his shot and saw it charged down.

It was a different story moments later when Iwobi's curling strike was brilliantly turned behind by Gomes, before Welbeck came close when his drilled effort was deflected for a corner.

Arsenal had dominated the opening quarter and Gomes was again tested as he pushed away a Sanchez free-kick, with Watford unable to build any sort of attack.

The visitors finally began to stir as Troy Deeney and Odion Ighalo started to receive some service - but it was short-lived as Arsenal doubled their lead after 38 minutes.

Francis Coquelin played in Sanchez, who returned an earlier favour by laying the ball across for Iwobi to finish calmly for his second goal in as many games.

Watford manager Quique Sanchez Flores responded by hauling off the ineffective Etienne Capoue and followed that up by introducing Nordin Amrabat at the interval.

But it was Arsenal who were again on top, adding a third as Allan Nyom could only head a clearance into the path of Bellerin, whose shot deflected off Ben Watson and wrong-footed Gomes.

Iwobi, again impressing in this Arsenal set-up, cracked a strike off the crossbar shortly afterwards, with Mesut Ozil failing to make good contact on the rebound.

Sebastian Prodl had the visitors' first decent chance as the hour mark approached, but his header was cleared away by Nacho Monreal, while David Ospina was forced into his first save with 20 minutes remaining as he pushed Deeney's effort aside.

Wenger took the chance to rest the legs of Welbeck, Iwobi and Sanchez in the closing stages and it was two of their replacements who turned it on for a last-minute fourth as Joel Campbell burst into the box to cut the ball back for Walcott to finish.