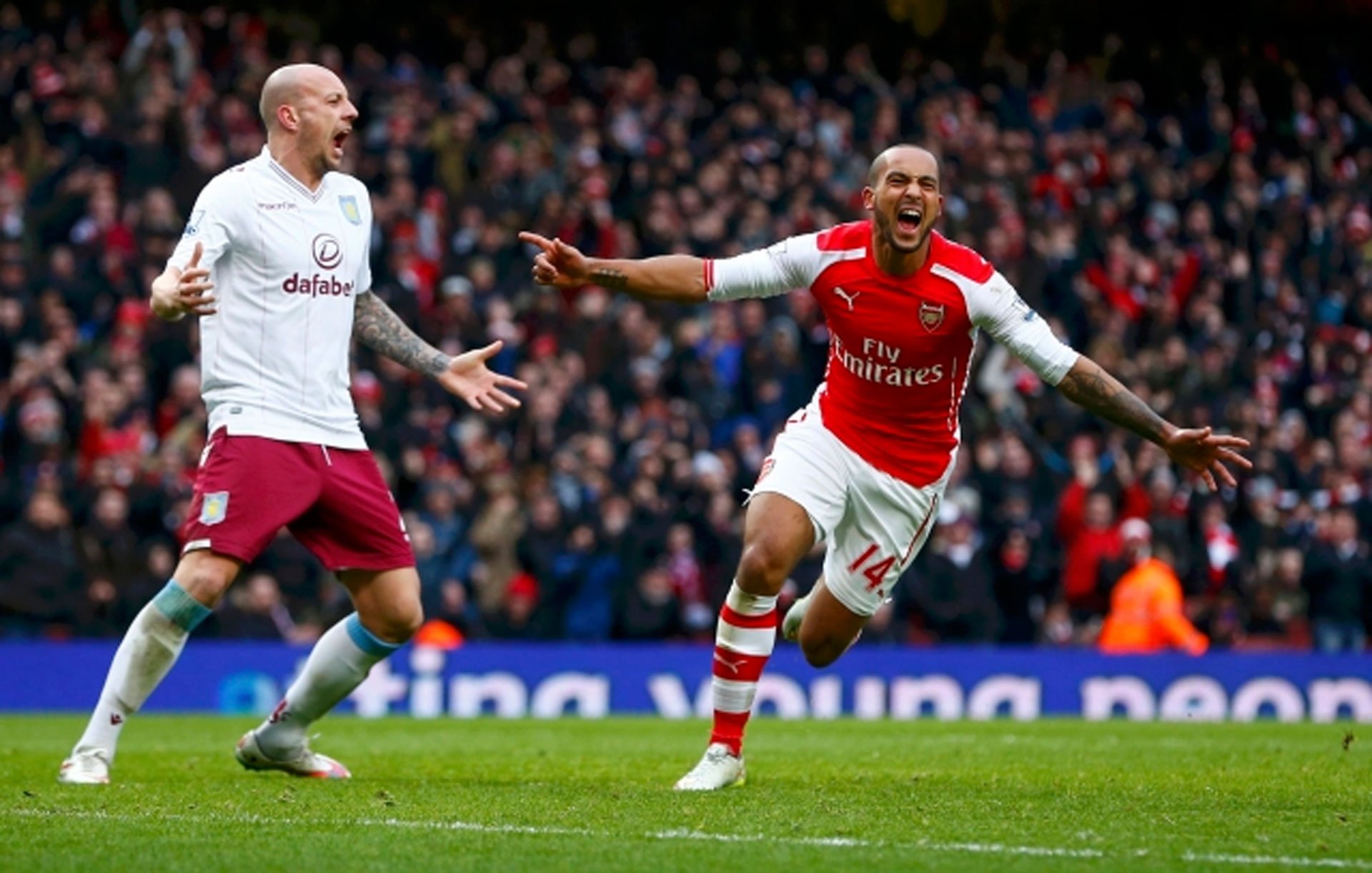 This was an emphatic performance, without some of the players that have shone in recent games - we're starting to play as a aquad at last, and when Ramsey re-discovers his form we'll be even better.

Villa really are a poor side - can't see Lambert holding on to his job for much longer to be honest.

Arsenal closed the gap on the top four of the Barclays Premier League as they romped to a 5-0 win over Aston Villa, whose goal drought continued at the Emirates Stadium.Olivier Giroud put the Gunners ahead on eight minutes, latching onto a brilliant flick by Mesut Ozil.Following an improved spell by Villa, whose last Premier League goal came against Manchester United on December 20, Ozil doubled Arsenal's lead early in the second half with another well-taken breakaway finish.

Theo Walcott scored his second in as many games to make it 3-0 on 63 minutes, with Santi Cazorla adding a fourth from the penalty spot before full-back Hector Bellerin rolled in his first senior Arsenal goal in stoppage time.Arsenal, who head to Tottenham next weekend, started brightly as Aaron Ramsey fired wide from the edge of the Villa penalty area.

The visitors were cut open again on eight minutes as Arsenal took the lead.Ozil clipped an expert volleyed pass from the centre-circle over the high Villa backline, which allowed Giroud to race clear.

The France forward kept his composure, carrying the ball into the penalty area as Jores Okore tried to get back to cover, before chipping an angled, left-foot shot across Brad Guzan and into the bottom right corner.Arsenal remained on the offensive

Villa defender Ciaran Clark was alert to nod the ball behind after Laurent Koscielny's header flew across the six-yard box towards Per Mertesacker at the far post.Villa had settled into a spell of possession, without making progress in the final third, when Arsenal suddenly sprung into life again on 26 minutes.Cazorla weaved to the edge of the Villa penalty area and sent a low shot goalwards, which beat Guzan but cannoned off the foot of the left-hand post.Arsenal thought they had doubled their lead when Ozil exchanged passes with Cazorla in the right side of the penalty box before lashing the ball past Guzan

However, the assistant referee on the nearside raised his flag against the Spaniard, who looked level in the build-up.Guzan then beat away Ramsey's 18-yard snapshot.On 41 minutes, Villa were close to breaking their goal drought when a bullet header from Andreas Weimann was saved brilliantly at point-blank range by David Ospina, again preferred to Wojciech Szczesny in the Arsenal goal.Villa had, though, set an unwanted record of some 570 minutes without a league goal, which continued to rise as the Clock End ticked on into the second half.After taking time to get into a rhythm again, Arsenal doubled their lead on 56 minutes.Walcott broke down the right, feeding Giroud in the centre

The France forward laid the ball off to Ozil rampaging down the left.The German took one touch to set himself at the edge of the penalty area, before clipping a left-foot finish into the bottom right corner with a finish of the highest order.

Arsenal were in cruise control, and went 3-0 ahead with another quality finish on 63 minutes.Walcott collected a throw-out from Ospina, and darted forwards.The England forward, who was out for the best part of a year with a knee injury, exchanged passes with Cazorla before taking the ball inside at the edge of the Villa penalty area and then dispatching it into the right corner.Villa, just three points above the relegation zone, made a double change as Scott Sinclair, signed on loan from Manchester City, made his debut, with Gabby Agbonlahor also coming on as Tom Cleverley and Weimann went off.

Giroud's flicked header hit the crossbar from a free-kick by Cazorla.Arsenal were awarded a penalty on 75 minutes when Guzan upended substitute Chuba Akpom.Cazorla struck his spot-kick down the middle of the goal, and although Guzan got a hand to the ball, he could not keep it out.In stoppage-time, Guzan got down quickly to deny Akpom, before Bellerin stroked home a fifth from just outside the box, low into the far corner.