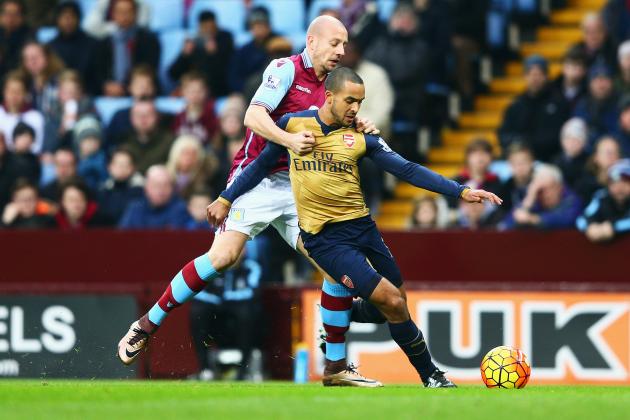 This was a good solid display against a Villa side who can't seem to get into first gear under former Gunner Remi Garde.

Goals from Giroud (the centre froward who doesn't score enough goals) and the improving Aaron Ramsey gave us the points.

Next up - Man City, and a sterner test of our ability to cope without our first choice team.

Arsenal sent out a title warning as they moved top of the Barclays Premier League after clinically dispatching a sinking Aston Villa.

Olivier Giroud's penalty and Aaron Ramsey's tap in moved them to the summit, a point ahead of Manchester City and Leicester, following a 2-0 win.

The Foxes could regain top spot if they beat Chelsea on Monday but with Manchester United losing at Bournemouth and City struggling to find a rhythm the Gunners have the title advantage.

In contrast, defeat left hosts Villa marooned eight points from safety at the bottom of the table with manager Remi Garde, who won the title with Arsenal in 1998, facing an increasingly difficult job.

They will be bottom at Christmas and face a must-win game at fellow strugglers Newcastle on Saturday having not won in a club record 15 league games.

Villa, one of just seven ever-present teams in the Premier League, have a mountain to climb in order to maintain their top-flight status.

The returning Theo Walcott, in for Alex Oxlade-Chamberlain, outpaced Alan Hutton on the right and tangled with the Scotland international in the area.

It took an age for referee Kevin Friend to point to the spot but when he did Giroud sent Brad Guzan the wrong way for his 50th league goal for Arsenal.

Villa's enthusiastic approach counted for nothing and Rudy Gestede nodded off his own line after Giroud's header caught Guzan in no man's land.

Leandro Bacuna ballooned over after Petr Cech flapped at a cross but Arsenal were comfortable and toyed with their hosts.

It was a training game for the Gunners as they passed in front of Villa and waited for their time to strike again, which came in the 38th minute.

Ramsey's strong challenge on Idrissa Gana set the visitors up on the counter attack and Walcott fed Mesut Ozil to dummy and race clean through.

He then squared to Wales star Ramsey, who had made up the ground, to tap past the helpless Guzan.

It was simple but clinical from the Gunners and left Villa floundering but the hosts at least started the second half with renewed vigour.

Scott Sinclair then wasted a golden chance on 57 minutes when he planted an unmarked header over from six yards.

Arsenal had eased off from their first half dominance to give Villa hope and Gana drilled inches over with 19 minutes left.

Jack Grealish - back in the squad after being dropped for two games when he was pictured partying following last month's 4-0 defeat at Everton - replaced Gana but Arsenal almost added a third on 82 minutes.

Villa allowed Ozil too much time on the right and when Ramsey held up his cross Oxlade-Chamberlain, on for Walcott, saw his effort saved by Guzan before the keeper claimed Hector Bellerin's injury-time header.

It was the Gunners' only serious threat of the half but the damage had been done early with Arsenal left to ponder their title challenge and Villa left to fret over their top flight future.