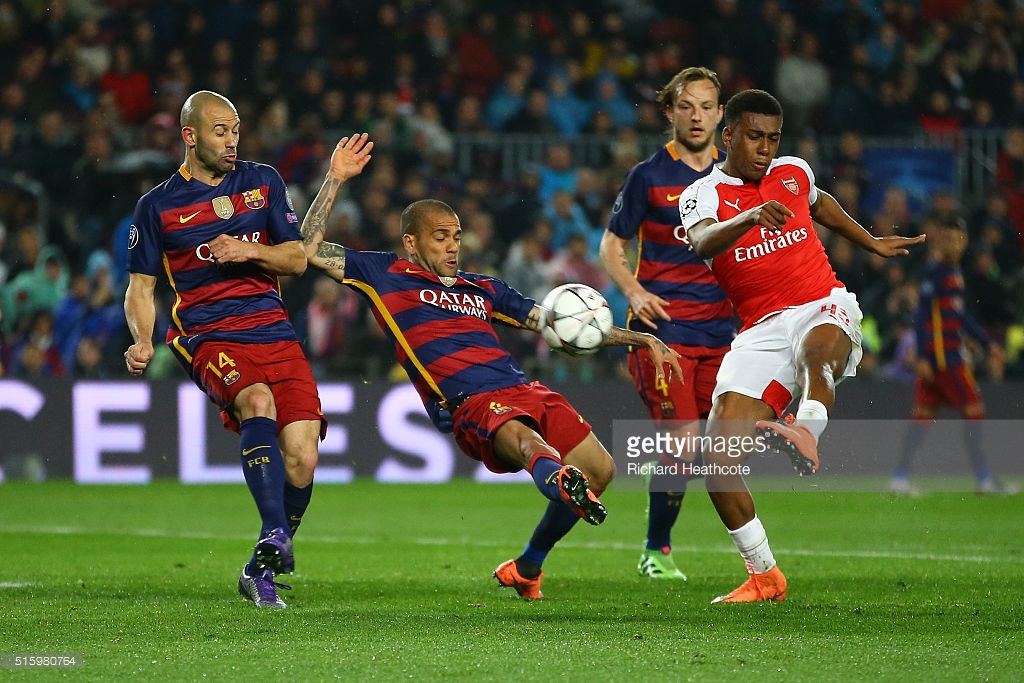 That said the players showed a bit of heart for once - not entirely their fault that they're simply not good enough at what they do.

Wenger will get some credit for this, which is possibly wrong.

We had countless chances to put ourselves ahead - some of them half chances I'll grant you - but we should have made more of the possession and chances that we had.

For a fleeting five minutes it looked like we might get back into contention at 1-1 and playing well, but the same old problems reared their heads and it was the predictable result.

Time to concentrate on the league then - oh hang on....

Arsenal could not make the impossible possible on Wednesday night as Barcelona's renowned triumvirate all scored to knock the Gunners out of the Champions League at the Nou Camp.

Many did not give Arsene Wenger's men a prayer given Barcelona's 37-game unbeaten run heading into a contest in which the Gunners needed to score three times to go through.

They put up a spirited fight against a home side who, in truth, played the game largely in second-gear and secured a 3-1 win courtesy of goals from Neymar, Lionel Messi and a sublime Luis Suarez volley - taking the trio's combined goal tally to 106 for the season - with Mohamed Elneny getting Arsenal on the scoresheet.

Wenger had conceded his side needed to achieve the impossible to advance past the round of 16 stage for the first time since 2010 but, despite a brave effort, it was not to be.

The Frenchman opted to play 19-year-old Alex Iwobi instead of Joel Campbell or Theo Walcott, while Danny Welbeck was played up top and Laurent Koscielny returned at the heart of the defence.

Arsenal started with confidence, unlike that of a team that has won just twice in their last eight games, and Welbeck should have done better when played in on goal by Mesut Ozil but the former Manchester United man stumbled and was lucky to win a corner.

Barcelona soon got into their effective stride but it was the visitors who had the next chance, Ozil pouncing on a loose ball in midfield and charging forward before zipping an effort wide of goal from 20 yards, with Elneny following suit soon after.

But Luis Enrique's magicians soon began to weave their magic, Neymar playing a perfectly-weighted, defence-splitting pass in to Messi - who controlled and shot but saw his strike kept out by a fine David Ospina save.

They were soon ahead, however as Koscielny was caught in possession looking to play out from the back and Suarez took full advantage, playing the ball into Neymar, who finished low past Ospina.

Iwobi wanted a penalty just after the half hour mark but was turned down - with Alexis Sanchez missing Arsenal's best opening of the half as he headed Hector Bellerin's cross wide of Marc-Andre ter Stegen's goal.

After the interval, Arsenal were again on top as Iwobi was played in before seeing his shot blocked behind for a corner before they finally got it right as Sanchez's pass across the area was lashed home by Elneny for the Egyptian's first goal for the club.

Ospina was on hand to keep Arsenal's slim chances alive, again keeping out Messi as he dived to his left to push away an effort from the Argentinian.

A brave block from Javier Mascherano prevented Welbeck getting a shot on ter Stegen's goal as the hopes of the travelling contingent high in the wet Barcelona sky continued to grow.

But it is the hope that kills you - and Suarez finished off the tie with a stunning volley, connecting sweetly with Dani Alves' cross to arrow his strike past a helpless Ospina.

Welbeck hit the bar from an acute angle before he and Iwobi were withdrawn for Walcott and Olivier Giroud - with Sanchez finally working ter Stegen with a well-struck free-kick.

The German stopper also kept out Giroud's follow-up as the visitors pushed for a result on the night but Barcelona were not finished as Messi lifted over Ospina to put the icing on the cake.