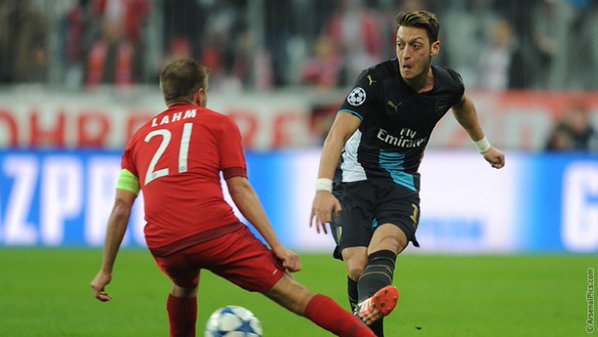 Bayern were simply too good for us - end of. They're probably the best team in the world right now, and we turned up shorn of many of our regular starters.

Consequently our confidence was fragile, and when Bayern took an early lead we never recovered.

At half time it looked as though they might get seven or eight before the ninety minutes were up, but remarkably we played much better in the second half, and they didn't have it all their own way. Giroud finished nicely for a token goal - we still lost 5-1, but even more damaging was the failure of Dinamo Zagreb to get a result in Greece.

This leaves us a mountain to climb - on we go.

Arsenal's Champions League hopes are hanging by a thread after they were blown away by Bayern Munich on Wednesday night.

The Gunners came to Germany full of confidence and with history on their side having never lost at the Allianz Arena, but they were second-best throughout as Bayern showed that defeat at the Emirates Stadium a fortnight ago was the merest blip in their superb start to the season.

Robert Lewandowski put the hosts ahead early on as he sprung the rustiest of offside traps before a Thomas Muller brace as well as goals from David Alaba and substitute Arjen Robben did further damage - with Olivier Giroud scoring a scant consolation as Bayern ran out 5-1 winners.

This galling defeat is the third in four Group F games and Arsene Wenger's side are now six points off second spot with two games remaining.

Mesut Ozil thought he had levelled for the visitors but was instead cautioned for handball as he turned home a Nacho Monreal cross almost straight after Bayern has gone in front.

Just 10 minutes in and Arsenal afforded Thiago the freedom of Munich as the Spain international delivered a sumptuous cross to Lewandowski, who headed home his 18th goal of the season as Gabriel played him onside.

The Brazilian, playing as Laurent Koscielny sat on the bench as a precaution due to a hip problem, had dropped deeper than his fellow defenders to play Lewandowski onside and then committed the cardinal sin of stepping up too late - allowing the Poland international to open the scoring.

Ozil was away celebrating an equaliser almost straight from the restart but the German was booked as referee Gianluca Rocchi correctly ruled he used his elbow to turn home Monreal's cross.

Bayern then had two good chances to double their advantage but Cech was on hand to keep out Lewandowski on two occasions as the hosts built up a head of steam.

Muller was on hand to control the Juventus loanee's shot and turn past Cech with the help of a deflection off Mertesacker's shin.

Cech then made a superb stop as he tipped Muller's header over the crossbar but, having done his best to keep his side in the game, he could only get his fingertips to Alaba's shot as the full-back skipped past Santi Cazorla before lashing home the third just before half-time.

Pep Guardiola had resisted the temptation to play Robben despite the Holland international playing a full 90 minutes at the weekend - but he needed just one touch to add the fourth having come on for the impressive Coman nine minutes after the break.

Cazorla should have pulled one back having been played through by Giroud but shot straight at Manuel Neuer.

The Frenchman did much better with his own chance, controlling Sanchez's chipped cross and acrobatically volleying a consolation for Arsenal.

Robben should have added a fifth after rounding Cech but dawdled and was well challenged by a backtracking Gabriel but Muller made no mistake in slotting home his second of the evening in the dying minutes to make this Arsenal's worst-ever Champions League defeat.