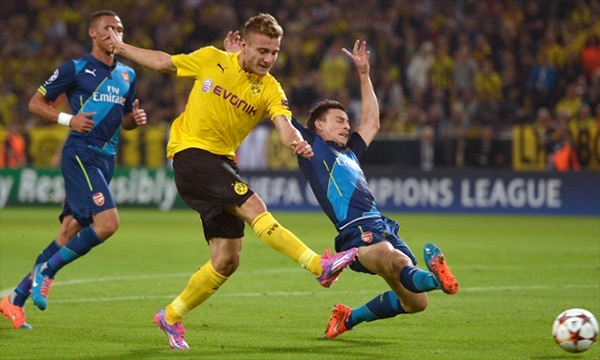 What's going on? - why the seeming total lack of motivation at the moment?

Frankly I believe that Wenger is to blame - Key players are being played out of position to accomopdate Ramsey and Wilshere in the centre of midfield.

Ozil and Sanchez are our two most expensive players, and Wenger is doing an 'Arshavin' on them and turning them into white elephants. For god's sake play them in their proper roles, and play wide players who can do the job.

Why does The Ox never start on the right hand side? answer - so that Ramsey and Wilshere can be accomodated.

Defensively we made shocking errors, but the back four had no protection from the midfield. Why we haven't signed a strong, tall defensive midfielder is beyond me.

Arsenal endured a chastening start to their Champions League group campaign after being overwhelmed by Borussia Dortmund at Signal Iduna Park.

Ciro Immobile and Pierre-Emerick Aubameyang struck either side of half-time and the German club would have been more emphatic victors than 2-0 but for the reflexes of Wojciech Szczesny and their own wastefulness.

For the second time in two matches Danny Welbeck illustrated why his finishing is considered below par for a top forward by failing to convert a one-on-one with a goalkeeper.

It was a key moment and the £16million signing from Manchester United, who had other chances to open his Gunners account, only enhanced concerns over his record in front of goal.

Had he scored it would have been a grave injustice, however, given that Arsenal's back four were tormented throughout in a display that will see Arsene Wenger face renewed criticism for refusing to sign defensive reinforcements over the summer.

At times they were comically poor with Laurent Koscielny and Per Mertesacker fully culpable, although they were offered little protection by Mikel Arteta, who was also exposed by the quick wits of Dortmund.

And in front of Arteta, Mesut Ozil once again drifted around aimlessly, contributing nothing until his second-half withdrawal.

Wenger can at least offer Arsenal's injury problems as some explanation for their fragility in defence at Signal Iduna Park.

Full-backs Nacho Monreal and Mathieu Debuchy were in the treatment room and Calum Chambers was confined to the bench because of tonsillitis, so Spanish teenager Hector Bellerin made his full debut.

Surprisingly, another right-back option Mathieu Flamini was omitted from the squad so Bellerin was given the chance to add to his solitary appearance as a substitute in the Capital One Cup.

The 19-year-old's first touch would not have calmed the nerves as he needlessly gave the ball away, but it was down Arsenal's left flank that Dortmund were making the greatest inroads.

Aubameyang and Immobile combined well before a slip by Arteta, who had recovered from his ankle injury to anchor the midfield, left the Gunners exposed.

Once Arteta had recovered, he brought down Henrikh Mkhitaryan and the Dortmund attacking midfielder was booked for diving by referee Olegario Benquerenca.

Arsenal earned brief reprieves from the constant pressure when Ramsey and Welbeck tried to unpick the back four and Ozil floated a wonderful long pass to Alexis Sanchez before the flag went up.

Only Szczesny kept Aubameyang at bay after he been released by Kevin Grosskreutz.

It was then the turn of Immobile to maraud free and his final ball was pushed aside by Szczesny, struck Koscielny and fell to Aubameyang, but Ramsey came to the rescue.

The onslaught gathered pace when Sanchez was dispossessed by Sebastian Kehl and this time the side netting foiled Aubameyang.

Sanchez almost reached a long-range free-kick and it was the Chile forward who was carrying the fight to Dortmund on the rare occasions Arsenal attacked.

Remarkably given the one-way traffic, Arsenal should have taken the lead in the 41st minute but Welbeck sent his one-on-one with Weidenfeller wide to beat after the trickery of Ramsey had parted Dortmund's defence.

On the stroke of half-time Immobile gave a lesson in finishing as picked up possession after a Gunners throw-in, held off Koscielny and crashed the ball past Szczesny.

The result was sealed in the 48th minute when Aubameyang collected a sublime pass by Grosskreutz, rounded Szczesny on the edge of the area and stabbed the ball over the line.

It would have been 3-0 but for Szczesny getting fingertips to a powerful shot from Immobile and Aubameyang hitting the woodwork.

Arteta gave the ball away and Aubameyang should have done better with his ensuing attempt and when Welbeck skied the ball over the crossbar at the other end, Arsenal knew it was not their night.

Alex Oxlade-Chamberlain prevented a near-certain goal with a superb tackle and to complete the Gunners' misery Jack Wilshere limped off.