Bournemouth 0 Arsenal 2 - Papering over the cracks 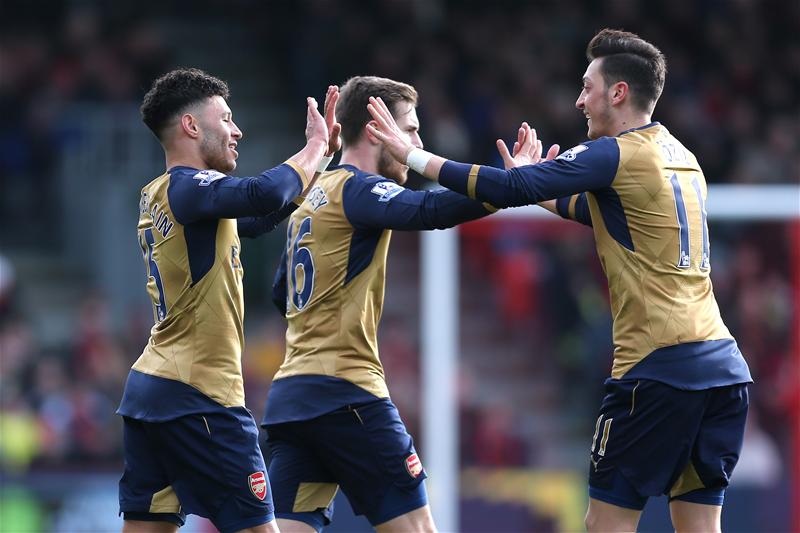 Don't get me wrong - this was a great result, but the manner of our victory leaves a lot to be desired.

Our midfield simply aren't cutting the mustard. Ramsey is in poor form, and Flamini just doesn't do it anymore. With Wilshere, and more importantly Cazorla unavailable we're struggling.

Why does Wenger sign a player like Elneny and not even play him? - for god's sake Arsene just sign a ready-made competent midfielder who can slot into the team.

Without Ozil we'd be nothing.

Arsenal finally woke from their Barclays Premier League slumber as two quick-fire goals proved enough to beat Bournemouth 2-0 and get them back into the title picture.

The Gunners had not won in four outings, failing to score in their last three, but a 2-0 victory in their first competitive game at the home of the Cherries keeps them in the hunt for a first championship since 2004.

This was a Sunday afternoon slow-burner until the midway point of the first-half, when Arsenal ended their near-five and a half hour run without a goal in style.

Mesut Ozil tucked away the opener for his first goal since he bagged in December's reverse fixture against Bournemouth and, just 88 seconds later, Alex Oxlade-Chamberlain struck to end a 17-month wait for a Premier League goal.

When Arsenal had beaten the Cherries on December 28 they had moved to the summit of the Premier League but a poor run since then sees them third behind Leicester and fierce local rivals Tottenham.

Eddie Howe's Bournemouth were actually the in-form side heading into this one, unbeaten in four having won three of those games to move clear of the bottom three.

By contrast, Arsenal had slipped from leaders on New Year's Day to fourth ahead of kick-off at the Vitality Stadium but this win moved them to within five points of table-topping Leicester - who visit the Emirates Stadium next Sunday.

Mathieu Flamini was booked for an early two-footed challenge on Dan Gosling before Alexis Sanchez fired over from a tight angle with neither side able to establish a foothold in the game in the opening stages.

Arsenal finally started to dominate and it paid off as Oliver Giroud cushioned Aaron Ramsey's long ball into the path of Ozil, who fired home past Artur Boruc.

And, after such a long wait for a goal, the Gunners were soon two ahead as Oxlade-Chamberlain was fed by Ramsey before finishing with a low drive off the post.

Bournemouth almost got straight back into the contest but Petr Cech was on hand to brilliantly tip Harry Arter's curling effort over his crossbar.

Matt Ritchie wasted a good chance as he spooned over when picked out of the edge of the Arsenal box, with Howe's men still reeling from the quick-fire sucker punch.

Cech was again on hand at the stroke of half-time as former Tottenham youngster Adam Smith was picked out in the area, beating Nacho Monreal to the ball only to see the Gunners stopper close him down.

It was Smith who hit the side-netting with Bournemouth's first chance of the second-half before Sanchez's shot was pushed behind by Boruc for an Arsenal corner, from which Giroud headed straight at the Poland international.

The game petered out later in the half but both goalkeepers were called into late action, Boruc smothering Ramsey's effort before Cech capped a good display as he saved well from Steve Cook and Harry Arter.

All eyes will now be on the midday showdown between the Gunners and Leicester next Sunday, with Arsenal knowing they need another victory to truly be back in the hunt.