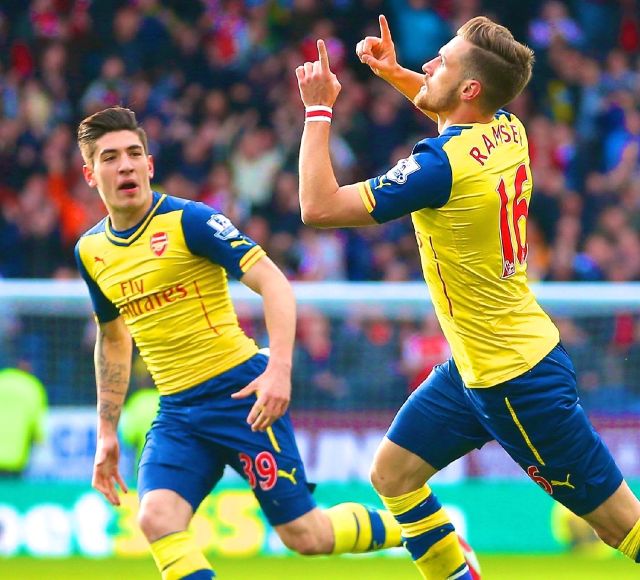 Nothing more to say really, except that we're now within four points of Chelsea (albeit briefly as they play QPR today).

With a handful of games left to play, winning the league isn't impossible at this stage, although it's highly improbable. We simply have to keep this excellent run of form going and see where it leaves us.

Plenty to play for!

Aaron Ramsey marked his 150th Premier League appearance with a first half winner as Arsenal closed the gap on leaders Chelsea to four points with a hard-fought 1-0 win at Turf Moor.

The Welshman pounced to drive the ball home in the 12th minute after a goalmouth scramble in which Alexis Sanchez and Mesut Ozil had seen shots blocked.

But the Gunners were forced to hold on to record their eighth successive league win as Sean Dyche's men hit back in the second half, with George Boyd missing a glorious chance to equalise and Danny Ings also coming close.

If the result left Dyche's men firmly entrenched in the relegation zone they will surely take heart from a gutsy display against the country's in-form team and other results which conspired to leave them only two points adrift of safety.

Wenger's men started well in another game they needed to win if they were to retain their faint hopes of catching Jose Mourinho's men, as well as maintaining clear air in between themselves and their rivals in the race for second place.

Sanchez whipped a first minute free-kick into the arms of home goalkeeper Tom Heaton from the edge of the box as the visitors made an early statement of intent.

But buoyed by the knowledge that an upset win could lift them out of the relegation zone, the Clarets were undaunted and responded with a pair of fine chances of their own.

First Sam Vokes was released down the left and out-paced Arsenal captain Per Mertesacker before being denied a shooting chance by Gunners keeper David Ospina, who raced from his goal to save.

Sanchez skied a snatched effort high and wide of the target before Vokes saw another half-chance blocked by the busy Mertesacker in the Gunners box.

Ramsey's goal was a sharp opportunistic effort as the Welshman pounced on a rebound in the box after Ozil's initial effort had been blocked by Heaton and a Sanchez follow-up struck Kieran Trippier.

If the goal was a little harsh on Burnley they responded well, pushing forward and claiming a handball against Mertesacker in the visitors' box which was waved away by referee Mike Dean.

Trippier was denied an equaliser in the 23rd minute when his left-foot free-kick from just outside the box was palmed away by a diving Ospina, and moments later Santi Cazorla sent a dangerous Gunners free-kick inches wide of Heaton's right-hand post.

Burnley pressed again at the start of the second half and forced an early corner from which Ashley Barnes' shot on the turn was caught by the alert Arsenal keeper.

Sanchez fired a 53rd minute effort which might have caught out Heaton down low, and Ramsey was only denied a second by a superb block in the box by Ben Mee as the Gunners gradually reasserted their authority on proceedings.

But just when the Gunners looked set to cruise to another victory Burnley responded with another period of pressure and contrived their best chance of the game in the 69th minute when Ben Mee beat Hector Bellerin to send in a cross with which Boyd could not quite connect in front of goal.

And moments later the Clarets had another chance when Scott Arfield's knockdown in the box teed up a chance for Danny Ings, whose clever bicycle-kick was saved down low by Ospina.

Gunners substitute Danny Welbeck saw a late chance drift wide but at the other end Ings almost fashioned another clear shooting chance as the visitors were forced to cling on for a win which will take them into next week's FA Cup semi-final in good heart.