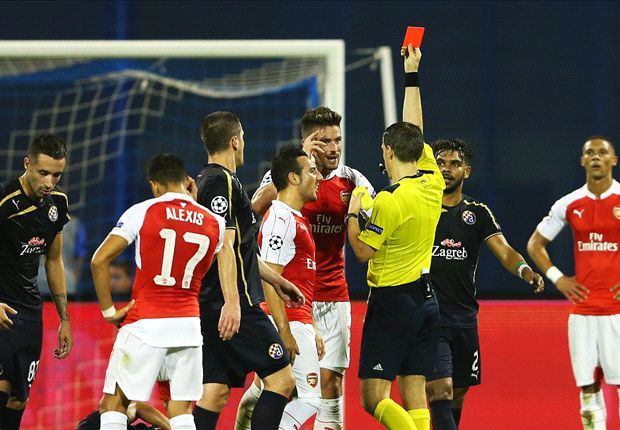 This was an Arsenal performance away in Europe like we'ver seen so many times - Indiscipline, poor defending at set pieces, inability to break down a well organised defence, and playing 'chase ther game' from very early on. It's simply not good enough.

Wenger fielded a side with six changes which didn't bode well - no doubt he has the trip to Stamford Bridge on his mind.

From the kickoff we failed to show any passion, and could only offer token resistance to Dinamo's well organised play. By half time they were two goals to the good and we were down to ten men following some idiotic play by Giroud.

We were always playing catchup, and not doing it very well.

Of course people will say that it's only the first group game and it's to early to write us off, but I honestly don't see us mounting a serious challenge this season in Europe - a few of the squad are going to need a serious talking to if we're to get out of the group.

Arsenal had striker Olivier Giroud sent off as they slumped to a disappointing 2-1 defeat in their Champions League Group F opener at Dinamo Zagreb.

The France forward missed a couple of early chances before collecting two needless cautions in the first half.

Dinamo took the lead against the run of play with an own-goal from Alex Oxlade-Chamberlain after the ball bounced back off him past goalkeeper David Ospina, who had saved Josip Pivaric's shot.

After Giroud's dismissal on 40 minutes, Dinamo doubled their lead through a powerful header by Junior Fernandes.

Despite a late goal from substitute Theo Walcott, Arsenal were left to reflect on another frustrating European away performance.

Gunners boss Arsene Wenger, perhaps with one eye on Saturday's Barclays Premier League trip to Chelsea, made six changes from the team which had beaten Stoke, which included a start for Ospina

Arsenal started brightly as Giroud, preferred in attack to Walcott, saw an early header tipped over.

The English club, in Europe's elite competition for an 18th successive campaign, continued to dominate at the Maksimir Stadium, which felt the force of an earthquake measuring 3.2 on the Richter scale on Tuesday night not long after Wenger's pre-match press conference.

Dinamo had not lost in a formidable run of some 41 matches and last season became the first team to go unbeaten through a Prva Liga campaign.

However, the Croatians had never previously qualified for the knock-out stages of the Champions League, with a 15-game winless run in the competition proper and were yet to beat an English side.

The hosts remained on the back foot as Arsenal pressed, with Oxlade-Chamberlain next away down the right. The England midfielder crossed for Giroud, whose near-post header hit the post and rebound struck the goalkeeper on the line.

On 24 minutes, Dinamo went ahead completely against the run of play.

Pivaric was played into the left side of the Arsenal penalty area inside Mathieu Dubuchy. His near-post effort was saved by Ospina, but cannoned back into the net off Oxlade-Chamberlain.

Arsenal's evening got worse five minutes before half-time when Giroud was sent off.

The France striker, who had already collected an earlier caution for dissent, tripped Daniel Ivo Pinto, which gave Romanian referee Ovidiu Alin Hategan little option but to issue a second yellow card followed by a red.

Dinamo almost doubled their lead at the start of the second half when El Arbi Soudani glanced a header against the far post, with the rebound scrambled behind.

It was 2-0 on 57 minutes when Fernandes got above three Arsenal defenders to head home a left-wing corner at the near post.

Wenger had seen enough, and soon made a treble substitution as Walcott, who once scored a hat-trick for England here, Francis Coquelin and Joel Campbell all came on.

Walcott reduced the deficit on 79 minutes when he produced a cool finish after sprinting clear onto Sanchez's pass down the right, but there was to be no late drama despite some five minutes of added time.