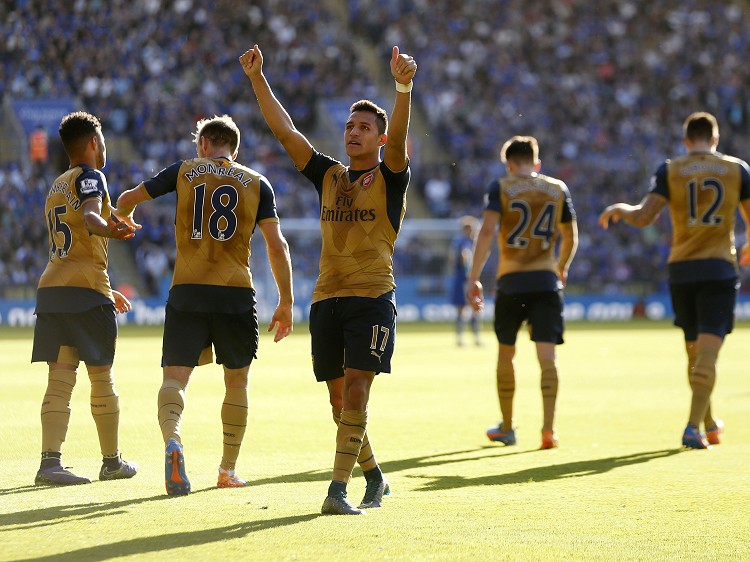 This was more like it. The lads started slowly, with the defence all over the place during the first fifteen minutes or so. Theo Walcott opened the scoring for us to cancel out the Leicester opener, and Sanchez added three more, the pick of which was the last, a crisply-struck long range shot that gave the keeper no chance at all.

Giroud finished it all of with a fifth at the death, and Leicester's unbeaten record was gone.

Alexis Sanchez's hat-trick saw Arsenal close the gap at the top of the Barclays Premier League after they came from behind at Leicester.

The deadly Chilean struck a classy treble as the Gunners moved to within three points of leaders Manchester United thanks to their 5-2 victory.

They also ended the Foxes' unbeaten start to the season after Theo Walcott had cancelled out Jamie Vardy's opener.

The Gunners almost took the lead after six minutes when Walcott was slipped through.

The pass forced him wide but he still crossed for Santi Cazorla whose shot was hacked off the line by Ritchie De Laet.

It spurred the Foxes into action and they were denied twice in quick succession four minutes later when Petr Cech turned Jeff Schlupp's drive away before the ball eventually came to Vardy who hit the base of the post.

But the England striker ruthlessly took his second chance on 13 minutes.

Arsenal's muted calls for a penalty after Aaron Ramsey went down in the box were ignored and the ball fell to Danny Drinkwater.

He spotted Vardy sprinting clear on the left and launched the ball to the 28-year-old who cut inside and curled a clinical finish past Cech.

Vardy epitomised fearless Leicester and came close to a second four minutes later when his miscued header came back off the bar.

But the hosts were then hit by a sucker punch as Arsenal immediately broke and levelled on 18 minutes.

Cazorla was given room in the middle to find Walcott and the forward outpaced De Laet to roll the ball in off the post.

It had been a counter-attacking masterclass from both sides and Arsenal ruthlessly demonstrated their threat again on 33 minutes.

Hector Bellerin and Walcott broke and, eventually, Sanchez, who scored in the 1-1 draw at the King Power Stadium last season, struck beyond Kasper Schmeichel.

Ranieri was left raging though after Shinji Okazaki appeared to be fouled in the build up.

Predictably the visitors slowed the game down but emerged from the break sharper and Sanchez made it 3-1 after 57 minutes.

New Sky Bet customers: Free matched bet up to £50!
The Foxes had not recovered from the Chilean's first goal and he again underlined his quality when he ended a neat move by nodding in Mesut Ozil's hanging ball from six yards.

De Laet's late block denied Ozil as the hosts began to wilt and the game was over with nine minutes left.

The Foxes were asleep when Sanchez collected the ball from a throw in, advanced and his low effort flew past Schmeichel from 25 yards.

Leicester's response, unsurprisingly, came through Vardy and he grabbed his sixth of the season when he curled in after Cech had denied Andrej Kramaric with two minutes left.

But Arsenal had the last word when Giroud converted Nacho Monreal's cross from 10 yards in injury time.