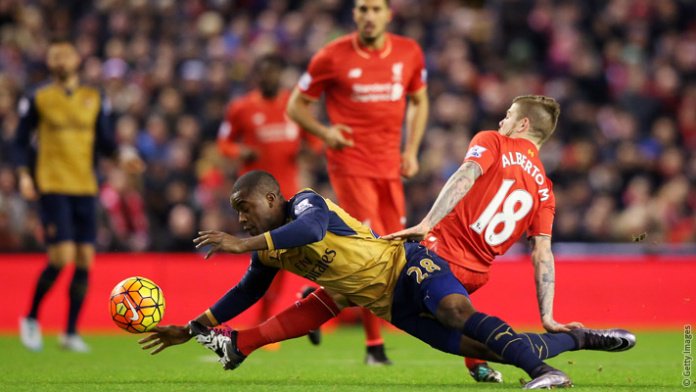 In hindsight this game had 'draw' written all over it - it was certainly all action from the kickoff, with the lads twice coming from behind.

Liverpool started the game with far more energy - once again we weren't bossing the midfield, and frequently gave the ball away. Ozil and Walcott were mostly nowhere to be seen in the first half.

How we miss Coquelin - before he got injured he was the player that bound everything together for us, allowing the midfielders in front of him to play with more swagger. Now we simply look nervous on the ball in our own half.

No matter, Ramsey and Giroud got goals for us to level the game at 2-2.

With half an hour to go Giroud got what should have been the winner, but true to form we couldn't defend our lead and let them in for an equaliser at the death.

Still, a draw at Anfield isn't a bad result - it just could have been so much better

Substitute Joe Allen was Liverpool's unexpected saviour with an added-time equaliser - just when Arsenal appeared to have sent a significant message in the title race.

With Manchester City held to a goalless draw at home to Everton, Arsene Wenger's side seemed to be underlining their title credentials having twice come from behind to lead 3-2.

But Allen, on the pitch for just eight minutes, denied them victory by volleying home at the far post to secure a 3-3 draw for the hosts.

Olivier Giroud looked to have won it for the visitors with two goals to take his tally to 12 in the league with two goals - after Ramsey had scored their first equaliser - to match a brace from Roberto Firmino.

Liverpool's starting line-up had managed just four league goals between them and that was synonymous with their difficulties this season with just 22 in their opening 20 league matches - so there was no suggestion this would be a goal-fest.

But Jurgen Klopp's preference of Firmino over Christian Benteke, his side's top goalscorer with seven, was justified as the Brazil international revelled in his false nine role.

His 10th-minute opener, turning to fire home a rebound after Petr Cech parried Emre Can's shot, for his first Anfield goal since arriving from Hoffenheim in the summer, was the signal for a manic 16 minutes in which four goals of varying quality were scored.

Liverpool's lead lasted just four minutes as Joel Campbell's through-ball allowed Ramsey to beat Simon Mignolet at his near post after Mamadou Sakho had lost his position after a clash of heads with Giroud.

The Belgium goalkeeper is on the verge of signing a new five-year contract, but his near-post fallibility - allied to a weakness at set-pieces - was his undoing again for Arsenal's second equaliser. Giroud deflected in Ramsey's corner, conceded by Sakho heading out from under his own crossbar after Ramsey's lob had beaten Mignolet.

That was after Firmino had put the hosts ahead again with a brilliant strike, shifting the ball onto his right foot from a pass from Jordan Henderson - making his first appearance of 2016 having been sidelined with a recurrence of his chronic heel problem - before curling it into the top corner.

Both sides could have scored more before the interval - Mignolet redeemed himself slightly with a bizarre scorpion-type kick while laid on the floor to deny Giroud's bungled effort when faced with an open goal, before Ramsey failed to connect with a far-post corner and Firmino clipped the bar with a volley.

Giroud's second, in the 55th minute, came after more flat-footed defending allowed the France international the time to spin and fire inside the far post.

Per Mertesacker blocked one dangerous Adam Lallana shot but Benteke's introduction did not give Arsenal too many problems - to the extent Klopp sent on newly-signed centre-back Steven Caulker for a debut up front alongside the Belgian for the final five minutes.

However, if the intention was to go long ball it escaped Allen, one of the smallest men in Liverpool's side, as he popped up at the far post to convert Henderson's cross.