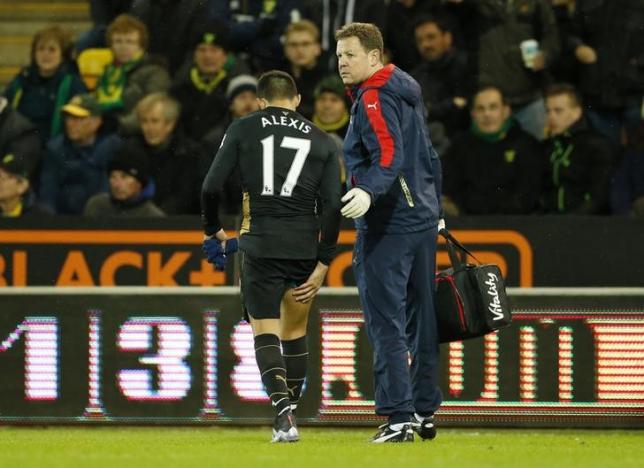 This was a costly trip to Norfolk - two points dropped, another chance to go top of the table squandered, and worst of all an injury to Alexis Sanchez.

This could be the day our title chances disappear.

Arsenal's title ambitions suffered a double-blow on Sunday as a draw at Norwich was compounded by an injury to Alexis Sanchez.

The Gunners could have moved level on points with Barclays Premier League top two Manchester City and Leicester but they were held to a 1-1 draw by a battling home side.

Mesut Ozil opened the scoring only for Lewis Grabban to equalise before half-time and Arsene Wenger's afternoon went from bad to worse as Sanchez hobbled off with a hamstring problem.

The Gunners boss had already lost defender Laurent Koscielny early on but Sanchez will be a huge miss if he is out for any length of time - with Wenger having admitted the former Barcelona man had felt a "little hamstring alarm" after the midweek win over Dinamo Zagreb.

Norwich battled back from a slow start and deserved a share of the spoils, although Alex Neil will feel his side made enough clear chances to win the game and pull themselves further clear of those scrapping at the foot of the table.

The visitors were able to give Aaron Ramsey his first start in almost six weeks and had Alex Oxlade-Chamberlain on the bench with both having recovered from hamstring issues.

But their wretched luck with injuries continued as Laurent Koscielny was forced off with less than 10 minutes gone after clashing with Lewis Grabban.

Both Ozil and Olivier Giroud spurned early chances for the visitors after a strong start from Wenger's side before the visitors finally forced John Ruddy into action just before the half-hour mark as Sanchez stung the palms of the England goalkeeper with a rasping effort.

Norwich finally began to stir and Robbie Brady tested Petr Cech as he curled in a right-footed effort which the Arsenal goalkeeper pushed away on the stretch.

The Republic of Ireland international was key to Norwich's equaliser from the next attack as he played the ball into the area where Grabban was too strong for substitute Gabriel and slotted home a simple finish on his first league start since the opening weekend of the season.

The Canaries should have been ahead at the interval but Wes Hoolahan somehow turned over Andre Wisdom's cross from three yards out as he ghosted in unmarked at the back-post.

The second-half started more evenly and neither side came close to taking the lead before Sanchez pulled up lame as Wenger's risk of playing his talisman backfired and he limped off to be replaced by Joel Campbell.

The loss of Sanchez seemed to knock Arsenal's confidence and Alex Neil's side set about taking full advantage.

Gabriel almost headed Martin Olsson's cross into his own goal only for Cech to make a stunning save, with Jonny Howson volleying the resulting corner over the crossbar.

Despite forcing the issue, Norwich could not find a late winner as Arsenal were left hanging on to take a point home on their plane back to London.