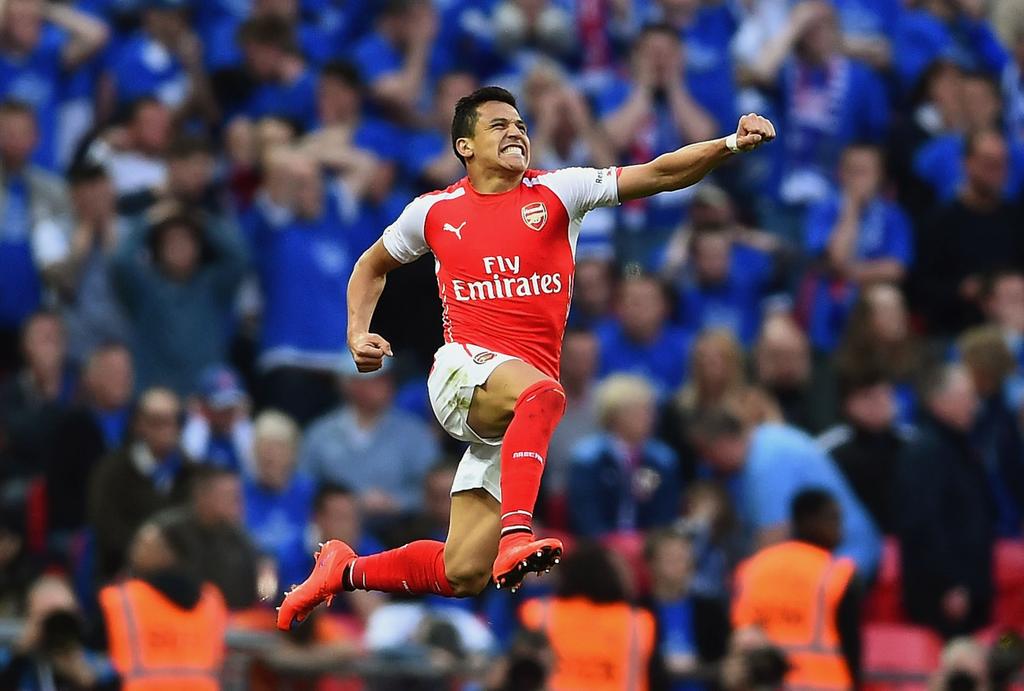 In truth we didn#t really turn up against Reading, save for one or two flashes of brilliance from our man Alexis Sanchez. The duracell bunny never stopped running and got the goals that put us into the final.

Reading punched above their weight - no doubt about that - and we looked somewhat complacent at times.

In the end it was the Reading keeper who gifted us the win and spared us the lottery of a penalty shootout. No doubt the neutrals all felt sorry for the guy, but at the end of the day he messed up and spared us the prospect of a final with an underdog - never pleasant to watch on the BBC.

Now we focus on Chelsea next weekend. A defeat against Man Utd would have left the title more open, but as it is it's hard to see anyone catching them. We have to give it our best shot though.

A fumble from Reading goalkeeper Adam Federici in extra time handed Arsenal a 2-1 victory and a place in the FA Cup final.

The Royals keeper, who had made some fine saves earlier in the match, allowed Alexis Sanchez's low shot to squirm between his legs and over the line on 115 minutes, which was enough to see the Gunners return to Wembley on May 30 to try to defend the trophy.

Sanchez had swept the Gunners into the lead on 39 minutes.

However, Reading were level when Garath McCleary's volley was deflected past goalkeeper Wojciech Szczesny, who could only palm the ball back over the line.

Arsenal twice hit the woodwork through a header from defender Gabriel and a close-range shot by Aaron Ramsey, but could not find a winner in normal time.

Arsenal manager Arsene Wenger named a strong XI and made the expected positive start, with Danny Welbeck the main outlet as he latched onto a through ball into the Reading penalty area from full-back Kieran Gibbs, which goalkeeper Federici came out to block.

The Royals number one had to be alert again with a smart save on eight minutes when Per Mertesacker met a corner from Mesut Ozil at the near post.

Reading - who had lost all off their past 12 meetings with Arsenal over the past 80 years - looked to counter themselves and had plenty of pace through Scotland forward Jamie Mackie.

Midfielder Jordan Obita tested Szczesny, back in goal for the cup tie on his 25th birthday, with a low effort from 25 yards.

Sanchez darted clear and stabbed the ball past the advancing Federici, before being clipped by the goalkeeper's trailing leg well outside the penalty area. However, referee Martin Atkinson signalled only for a goal-kick.

Reading - who had conceded just two goals in their five FA Cup ties this season, but were without a victory in six league games - sat deep as Arsenal failed to break them down.

The Championship side, though, were finally carved open on 39 minutes by a goal of the highest craftsmanship.

Mesut Ozil looked up, some 30 yards out, before floating a perfectly weighted pass to Sanchez in the penalty area.

The diminutive Chile forward turned back inside Garath McCleary before slotting past Federici.

With the pressure eased for the second half, Arsenal started brightly, as a backward header from Mertesacker dropped just wide.

Reading looked in need of something extraordinary to revive hopes of making a first FA Cup final in the club's history.

It arrived on 54 minutes.

Pavel Pogrebnyak battled down to the left goal-line, and floated a ball back up over through the six-yard box.

McCleary arrived at the far post and volleyed it goalwards, the shot deflecting off Gibbs and wrong-footing Szczesny, who could only palm the ball back over the line, with the referee receiving the alert from the Goal Decision System, which is being used in both the semi-final and final at Wembley.

From a position of relative comfort, the Premier League side, who had won eight straight matches, were rattled as Reading found an extra gear attacking the goal in front of their massed ranks of blue-and-white clad supporters.

On 63 minutes, Arsenal were forced into a change as Mertesacker hobbled off, replaced by Gabriel.

The Brazilian was within inches of putting the Gunners back in front when his bullet header from a corner was brilliantly tipped onto the crossbar by Federici.

Wenger made a tactical change on 72 minutes as Welbeck was replaced by Olivier Giroud.

Szczesny produced a smart save to beat away a low 20 yard strike from Nathaniel Chalobah.

Arsenal hit the woodwork again moments later when Ramsey battled past Obita into the six-yard box, the ball rebounding off the keeper and back to the Wales midfielder who crashed it onto the post.

The match was now so open as both teams pressed, Pogrebnyak getting clear but then failing to find a finish with Ramsey, whose goal won the 2014 FA Cup, also firing over as the clock ticked down.

Arsenal had also needed extra time and then penalties to get past Wigan at the same stage of last season's competition.

The Gunners regrouped for the restart, with Santi Cazorla drilling a rising 20-yard shot over.

Much like earlier in the match, Reading were happy to sit back and soak up plenty of pressure.

Theo Walcott came on, replacing Francis Coquelin, in the 101st minute to make a first appearance in more than a month.

Ramsey's low drive was deflected up and over the crossbar by Federici.

The Australian's luck was out, though, on the stroke of the half-time break.

Sanchez cut in from the left and drilled in an angled shot, which went through the goalkeeper's legs and trickled over the line, leaving him sprawled face down on the Wembley turf, no doubt wanting it to swallow him up.

Arsenal looked for a third to kill off the game in the second period, with Giroud hitting the outside of the post after being teed up by Ozil.