Sheffield Wednesday 3 Arsenal 0 - An insult to the travelling Gooners 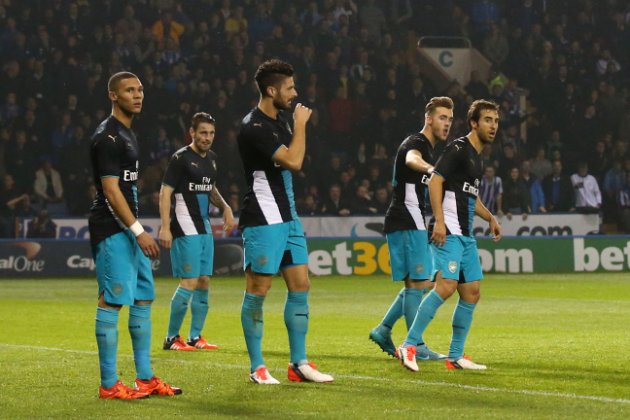 I'm sure there's a precedent for compensating the travelling support for wasting their hard-earned on a trip up north to watch a team who'd clearly decided before the game that they couldn't be arsed.

This competition normally allows the kids to shine, but on the evidence of last night even they couldn't be arsed.

A total waste of time - some will blame the horrendous kit.

Arsenal were unceremoniously dumped out of the Capital One Cup on a damaging night as Sheffield Wednesday blew them away with a stunning 3-0 victory at Hillsborough.

The Gunners, who beat Bayern Munich in the Champions League and Everton to briefly go top of the Barclays Premier League in the last seven days, were brought back down to earth by the Sky Bet Championship outfit, who deservedly progressed to the quarter-finals for the first time since 2002 thanks to goals from Ross Wallace, Lucas Joao and Sam Hutchinson.

It means that Arsene Wenger's wait for a first League Cup of his lengthy reign goes on and the Gunners have not won this competition since 1993, when they were victors over the Owls at Wembley.

But what may come as a bigger cost to Wenger on a damaging night are injuries suffered to Alex Oxlade-Chamberlain and Theo Walcott, who both went off in the opening stages of the match.

The fortunes of the two sides in those 22 years could not have been more different, but Wednesday were every inch the worthy winners and they claim a second successive Premier League scalp following a third-round victory at Newcastle.

Most of the action in the opening 20 minutes was in the Arsenal dug-out as they lost both Oxlade-Chamberlain and Walcott, which could have implications for their visit to Swansea on Saturday and for Roy Hodgson's England ahead of the forthcoming fixtures with Spain and France.

Those changes meant the Gunners struggled for any fluency and - after neutralising any early threat - Wednesday took a 27th-minute lead with a fine goal.

The Owls worked the ball superbly down the left and Daniel Pudil, set free by Barry Bannan, pulled back a superb cross to Wallace on the edge of the area and the former Scotland international drilled a first-time effort into the bottom corner.

Hillsborough was rocking like it used to when fixtures like this were a regular occurrence in the mid-90s and the hosts and Wallace were inches away from a second minutes later as the left-footer curled a 20-yard free-kick just wide, with goalkeeper Petr Cech only able to look on.

After making an impressive save to keep out Jeremy Helan's effort, Cech was rooted to the spot again as Wednesday did make it two in the 40th minute.

The resulting corner from Helan's effort was played short to Wallace and he sent in a cross which an unmarked Lucas Joao climbed highest to and headed into the corner.

The Gunners were back out after the interval well before their hosts, clearly keen to stage a second-half comeback, but any such hopes were crushed six minutes after the restart as Hutchinson made it three.

Bannan clipped a free-kick to the far post where Tom Lees was unmarked and his ball back across goal was too easy for Hutchinson to scoop home.

Arsenal enjoyed plenty of the ball, but inexplicably they rarely tested rookie Wednesday goalkeeper Joe Wildsmith, who was a spectator for much of the final 30 minutes.

The one time Wildsmith was called into action, he superbly turned Per Mertesacker's header over the bar as Wednesday saw out a famous win and a ninth game in all competitions without defeat.