Watford 0 Arsenal 3 - Second half show from The Lads 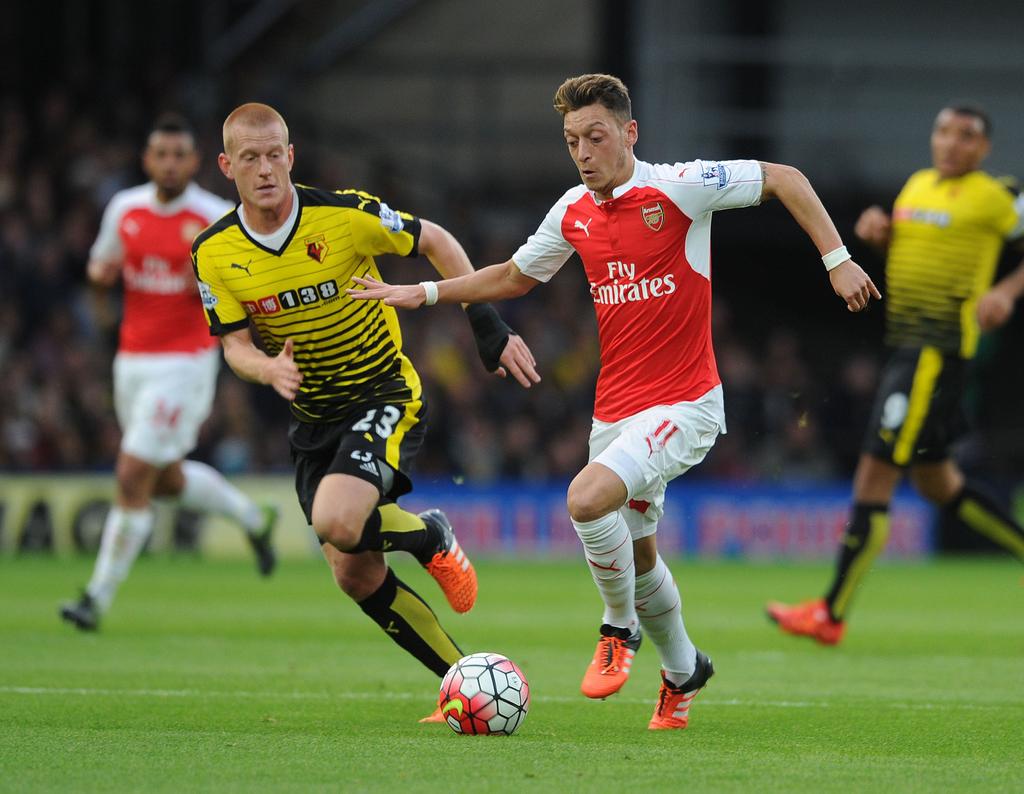 This was a tricky game on the day - maybe not so tricky on paper beforehand but watford put up a good fight in the first half.

Sanchez had an early chance saved, and Watford put up a good show until Sanchez (again) put us one up in the sixty-second minute.

from that point on our superiority was evident, with Giroud and ramsey finishing things off nicely.

Three points mean we go back above Manchester United in to second place again - a very satisfactory afternoon's work.

Now for Bayern on Tuesday.

Arsenal moved to second in the Barclays Premier League with an impressive 3-0 win at Watford.

The Gunners, who had beaten Manchester United before the international break, were made to work hard for their victory following a spirited effort by the well-organised Hornets.

Ultimately, though, the technical superiority of Arsene Wenger's men proved enough, as in-form Alexis Sanchez netted after a breakaway on 62 minutes, with goals from substitute Olivier Giroud and Aaron Ramsey helping to keep Arsenal only two points behind leaders Manchester City.

Theo Walcott was again deployed as a central striker, supported by the all-action Sanchez and playmaker Mesut Ozil.

Arsenal put the pressure on from kick off, with Sanchez's rising 25-yard effort forcing Watford keeper Heurelho Gomes into a smart save on nine minutes.

At the other end, Petr Cech had to be alert to beat away a fierce drive from Troy Deenay after the forward had won the ball just outside the penalty area.

Despite holding a high line, Watford also offered plenty of attacking threat with the physicality of Deenay a problem for the Arsenal defence.

The Hornets, though, were cut open on 28 minutes.

Clever footwork from Ozil played Sanchez into space, and his lofted, angled pass fell at the far post to Ramsey, but at point-blank range, the Wales midfielder sent a sidefoot effort up off the top of the crossbar.

Watford then broke quickly as Odion Ighalo raced clear into the right side of the Arsenal penalty area, but tumbled under pressure from Nacho Monreal, stabbing the ball wide before appealing in vane for a penalty.

Just before half-time, Cech raced off his line to clear a long pass from Etienne Capoue which the Watford players claimed was with his arm rather than shoulder, but referee Mike Jones waved away the appeals.

Watford upped the tempo following the restart, out-fighting Arsenal in all areas.

Capoue led the charge and was screaming for a penalty after going down under a challenge from Francis Coquelin.

The referee, however, waved played on, and Arsenal immediately broke to take the lead on 62 minutes.

Sanchez dashed down the left and fed Santi Cazorla at the edge of the Watford box. His slide-rule pass picked out Ozil, who was brought down by a diving challenge from Craig Cathcart. Before the referee could point to the penalty spot, Chile forward Sanchez had lashed the loose ball in off the far post for his 10th goal in six appearances for club and country.

Before Watford could mount a recovery, Arsenal had doubled their lead.

Ozil was again involved, cutting a deflected pass back through the six-yard box where Giroud, who had only just replaced Walcott, swept the ball into the roof of the net on 68 minutes.

Ramsey - on target for Wales in their midweek Euro 2016 qualifier against Andorra - finally got back on the Arsenal goal trail when he tapped home a deflected effort, off defender Ikechi Anya, following a darting run down the right by Hector Bellerin in the 73rd minute.