​It'd be inaccurate to call Roy Keane a Marmite figure, because that implies around half of people love him - the truth is it's probably far fewer than that.

But, for all of his flaws, he's due a moment of 'good value' every now and again, and his debut on Sky Sports' Monday Night Football for Manchester United's 1-1 draw with Arsenal was surprisingly full of such moments.

So, let's take a look at some of his best lines from the coverage. Gary Neville is a stalwart of this iteration of Monday Night Football, the chief superintendent, the guv'nor, if you will. He takes his place in the studio or on the gantry and the place is his to run.

At the end​ of a drab match featuring little action, Neville claimed the second half was an enthralling watch, featuring "lots of endeavour, lots of chances". However, Keane's assessment was the complete opposite.

“Gary Neville said it was a really good game – I must’ve been watching a different game,” he said. “I thought it was shocking.

“United lacked the belief to finish the game off – the game was there for the taking for United. I’m not sure what can Ole [Gunnar Solskjaer] will take from it. There’s not too many positives.”

Defending Granit Xhaka for Some Reason

By all accounts, Roy Keane is a 'Proper Football Man

When asked about the incident by Jamie Carragher, Keane said: “It does come at him pretty quick Jamie, I have to say.

Well, if the toughest tackling midfielder of his generation says so, who are we to argue? 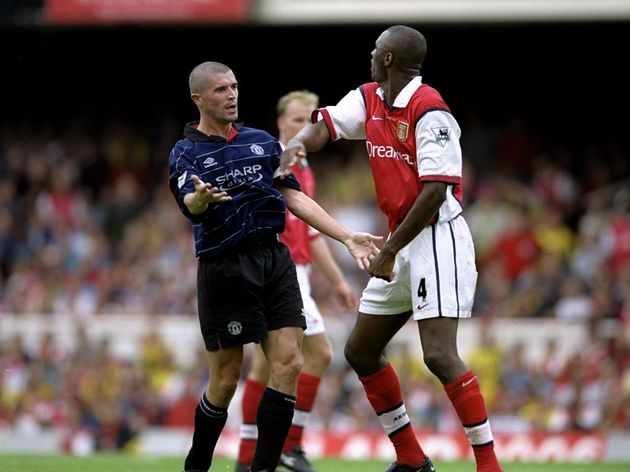 Manchester United and Arsenal's rivalry is best epitomised by that of their captains during the early 2000s - Keane and Patrick Vieira.

Their feuds during their times at their respective clubs are well-documented by now, and Keane reiterated the Frenchman was his "toughest opponent at the time", but was eager to reignite this old fire.

"What we would've done, when [Juan Sebastian] Veron came to the club, you see that as a challenge.

"I was never one for argy-bargy or slagging people off in the tunnel, but Patrick had threatened Gary [Neville] in the tunnel and I felt he crossed the line," he added.

"The key for me after that is don't be distracted by it. Focus on the match. The most important thing that night was to win the game, which we did.

Not Impressed by Nicolas Pepe £72m man Nicolas Pepe has found it tough to get going at Arsenal since his summer transfer from Lille, and his performance at Old Trafford did him no favours.

The Ivorian looked terribly uncoordinated, creating little and ballooning his shots straight into the crowd.

Keane compared his performance with that of 17-year-old Bukayo Saka on the opposite flank for Arsenal.

Presenter: ‘Roy we look forward to watching lots more football with you this season’

Keane is one of Sky Sports' latest 'signings' for the season, with Jose Mourinho probably the most high profile of their new pundits.

Presenter David Jones ended Monday night's broadcast by looking ahead to the new season with Keane alongside him.