​"Always look on the bright side of life."

A life motto that ensures no matter how down you may be, or how miserable your respective club's fortunes are, there is something to smile about.

It's a necessary mantra for Arsenal fans at present, given that the current turmoil at the club has seen them win just six of their last 17 Premier League games.

Given that Halloween is upon us, and ​Arsenal'

Brace yourselves, because some of these lineups are fear-inducing... So, why don't bury the hatchet and banish the ghosts of yesteryear by instead laughing at how poor Arsenal were?

Sure on paper, that is not a bad side. The only issue was, Arsenal were so beset with injuries that the back four ended up being stuck together with sticky tape after Wenger ran out of glue and staples. ​Armand Traore. Carl Jenkinson. Johan Djourou. No words needed.

United tore them to shreds.

It was an Old Trafford humbling. A destruction. An embarrassment. A mutilation, if you like.

None of those players play for Arsenal anymore. Against a ​City side boasting the likes of Sergio Aguero, Edin Dzeko and Samir Nasri, it's an achievement in itself that this League Cup clash was lost only 1-0.

Playing a back four that lacked a single full back, and a strike-force that sent shivers down the spines of Arsenal fans (not City fans) this lineup will live long in the memory as being one of the worst under Arsene Wenger's 22-year tenure.

Even the most #DENCH of midfielders in Frimpong* couldn't do the trick (or treat). He was an utterly woeful football player. Just one pleasant winter month after their League Cup loss, Wenger took a heavily weakened side to Greece in their final ​Champions League group game knowing that even defeat wouldn't see them surrender top spot.

What is clear to see is that there was even more trash lurking in among the Arsenal squad that didn't feature against City, with the likes of Andre Santos somehow still earning minutes for the Gunners. Djourou at right back and a midfield duo of Coquelin and Frimpong? I mean, come on, really?

​While largely the same side who played at the Emirates Stadium, when you take into account that this was a European fixture with 2,000 travelling Arsenal fans in attendance, the lineup ceased to amaze.

Unsurprisingly, Wenger's side slumped to a 3-1 defeat, and nobody in their right mind saw any other result befalling the Gunners that evening. 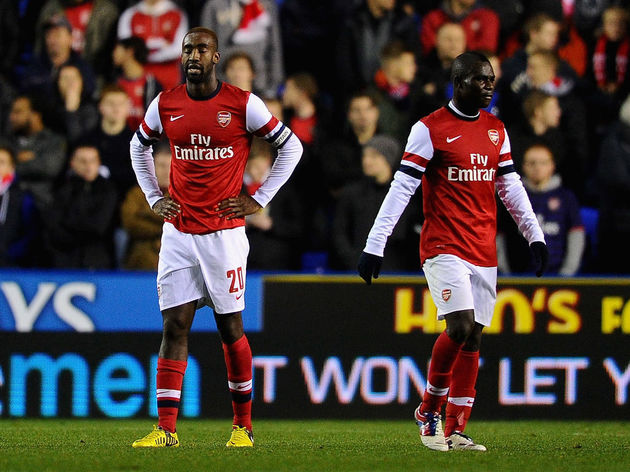 We were witness to another domestic dazzler on Wednesday night in the League Cup as Arsenal once again shipped five goals in the competition, although this time the dreaded penalty shootout put them to the sword.

But who could forget that historic night in Berkshire? Will it ever be topped? Who knows. What we do know though, is that Arsenal's team on the night was mostly dreadful, something often forgotten in the midst of the insane scoreline.

Lord Jenkinson played his part in seeing the visitors be 4-0 down inside 37 minutes, with a stirring comeback in normal time culminating in an outrageous 7-5 win for the Gunners.

Now one of the hottest prospects in world football, Gnabry's name hardly incited excitement among the traveling fans. Meanwhile, Jernade Meade was on the bench.

Who? You may ask. Well, he's that Luton lad who now plies his trade for Only Chambers remains today from that squad, one filled with sluggish defenders, midfield hopefuls who failed to inspire, and a substitutes bench whose first names come together to form a bizarre Europop boyband.

The Ox got crocked five minutes in, followed by his substitute Walcott just 14 minutes later, in what was one of the worst away days for Arsenal fans that season. Granted, Wenger had plenty of stars missing for the match, but slumping to a 3-0 defeat against a side tenth in the Championship brought with it unprecedented new lows.

Not the mention that atrocity of a kit... An abomination.