90min's Definitive A to Z of Arsenal

Did he change his name to land the job? Did Arsenal somehow predict how important Wenger was to become, and quickly rename themselves to align with their soon-to-be great manager?

I would have understood if they did just that; I anticipate Arsène making an excellent name for one of my own children one day. Anyway, there may be nothing more enjoyable in this world than constructing the definitive A-Z of ​Arsenal. Well, for me at least.

So sit back, relax, and take a trip down memory line with an array of alphabetic selections of all things Arsenal FC.

A is for Arsenal

This one is slightly boring, but we didn't really have much choice when it came to the most prominent association Arsenal has with the letter A.

Starting with 'A' also means we tend to start the season sitting nice and pretty at the top of the league, which is always pleasant while it lasts. What a bonus.

B is for Dennis Bergkamp

Arsenal's very own Dutch magician who will forever be one of, if not the most technically gifted footballer ever to represent the club. As I'm sure many Arsenal fans will admit, we've all watched that goal against Newcastle an unhealthy number of times. But, it is just that good, is it not?

C is for Sol Campbell

You'd think that a player who spent nine years at Spurs would have no place in Arsenal's history. Think twice. Campbell made the sensational switch to the Red side of north London in 2001. And the best part? He arrived on a free transfer. Why? Because he wanted to win trophies. And he did, winning two Premier Leagues, two FA Cups, and playing a pivotal role in the Invincible side of 2003/04.

D is for David Dein

Dein was the man who shocked the world when he announced that Arsenal had a new manager in 1996. His name? Arsène Wenger. At the time, no one could quite believe that Dein had taken such a gamble, let alone appoint an unproven Frenchman as Arsenal's manager. If you're reading, thank you David.

E is for The Emirates

It may not have completely recaptured the spirit of our beloved Highbury, but Arsenal's Emirates Stadium remains one of the finest in all the land. It didn't come cheap, and it wasn't without its consequences for the club, the players, the fans, and the manager. But, it's our home, and it's great.

F is for Freddie Ljungberg

An absolute legend at the club, Freddie's contribution over the years deserves serious recognition. Not only was he a top player for the Gunners - an invincible - he is also currently one of Mikel Arteta assistant coaches. Also, following the sacking of Unai Emery, Arsenal's board said: "Here you go Freddie! Try to fix this utter mess while we sort ourselves out!" He will forever have a place in our hearts.

G is for George Graham

Given Wenger's 20-year legacy, George Graham's place in Arsenal's history tends to be overlooked. Not so fast.

In 1989, he guided the club to their first league title for 18 years when they won it on that final day against Liverpool.

H is for Thierry Henry & Highbury

Our greatest ever player. Our record goalscorer. Our king. It continues to baffle me that Thierry Henry actually played for Arsenal. At the peak of his powers, he was the world's best striker. And he was ours. In any case, we all know about Henry's 228 goals, including his sensational return with that strike against Leeds in 2012.

But we must also give honorary mention to his former home that was Arsenal's home for almost 100 years. What a ground Highbury was.

I is for The Invincibles

And yes, we are still the only English side to have managed an entire top-flight campaign without losing. People may laugh, but Arsenal fans will never let go of this one. And nor should we. 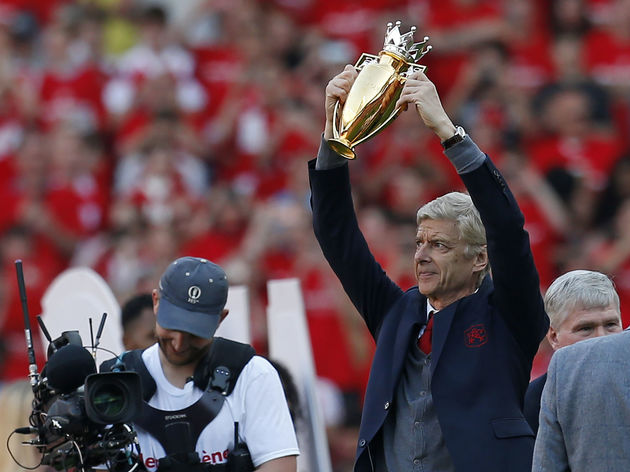 Wenger's mesmeric side went the whole of the 2003/04 ​Premier League season unbeaten, hence the nickname. And thanks to Watford, that record remains untouched. Thank goodness.

J is for Jens Lehmann

Oh how the Arsenal faithful took to 'Mad Jens'. He had it all to do when he arrived in 2003, with some rather large David Seaman-sized gloves to fill. How did he fair? Well, he started every game of the unbeaten campaign as he emerged as one of the country's best shot-stoppers. He also set the record for highest number of consecutive ​Champions League clean sheets (10) during the 2005/06 campaign.

Keown was a regular fixture in Arsenal's double-winning sides of the early Wenger era, and was part of the Invincibles of 2003/04. His goading of Ruud Van Nistelrooy after the Dutchman's penalty miss was one of the most iconic moments that season. Long may it be remembered. Meanwhile, Koscielny racked up 353 appearances over nine seasons at the club. His time in north London coincided with a difficult ten-year period of relative stagnation. Yet, our former captain turned up (for the most part) week in, week out. A true boss.

L is for London

Arsenal may be north London's finest, but we haven't always resided in our current region. The club was previously based down in Woolwich, south east London. We weren't always Arsenal either - the club was formed in 1886 as 'Dial Square', then becoming 'Woolwich Arsenal', 'The Arsenal', and finally, Arsenal.

We then moved to Highbury, north London in 1913. A nice little nugget of Arsenal history for you all to enjoy.

M is for Mikel Arteta Our devilishly handsome Spaniard has made an decent start to his managerial career at Arsenal.

With Mikel at the wheel, let's hope this is the beginning of an illustrious period of Arsenal's history.

N is for Terry Neill

This man won't be commonly known by the younger generations of Arsenal fans. Neill was appointed manager in 1976. He won the FA cup in 1979, and managed the Gunners until 1983.

Mikel Arteta may be the youngest current manager in the Premier League, but Neill remains the youngest ever at Arsenal - he was just 34 years old when he took the reins from Bertie Mee.

These two can be viewed in a slightly different context. O'Leary, a regular attendee at the Emirates these days, remains Arsenal's record appearance-maker. 722 appearances - will it ever be beaten? Then comes Özil. The club hadn't signed a big player for a long time. And in 2013, we did just that, smashing our transfer record to bring in one of the world's greatest stars. Safe to say it's been up and down since then. Still, a big moment in Arsenal's history.

P is for Robert Pirés

Oh Bobby. He loves the club so much he just can't bring himself to leave - he's part of the furniture at London Colney these days. What a sight it was to see him taunting opposition defenders - he did it for fun during his playing days. One of the most impressive members of the Invincibles, Pires goes down in history as one of Arsenal's best ever.

Q is for Champions League Qualification

It's what we are all desperate for at the moment, but there was a time when finishing in the top four was Arsenal's bread and butter.

In fact, Arsène Wenger guided the Gunners to 19 consecutive seasons of Champions League qualification. Not a bad record.

R is for David 'Rocky' Rocastle Rocky Rocastle's legendary status remains well and truly intact at Arsenal. He joined in 1982 (managed by Terry Neill), and won his first league title in 1989 - he played every game that season.

Overall, he made 228 appearances, and won two league titles. His death at the age of 33 in 2001 remains a great tragedy. Long may his memory live on.

S is for David Seaman

The most successful keeper in the club's history. Seaman made a whopping 564 appearances for Arsenal during his 13-year stint at the club. He won three league titles, four FA Cups, and in doing so made a fair few jaw-dropping saves. An Arsenal legend, that's for sure.

T is for Tony Adams

Honorary mention to Michael Thomas for scoring that goal against ​Liverpool to clinch the league title in 1989.

But, for T we must go to the one and only Tony Adams. 670 career appearances, and they were all for the Gunners. If anyone is Mr. Arsenal, it's him. He was named captain at the age of 21, and continued the role for the following 14 years. He captained title-winning sides across three different decades, winning four in total. Outstanding stuff.

U is for Unbeaten, Undefeated & Unrivalled

Don't really need to add anything else to the above. We set the record, and it remains untouched, unrivalled, unbeatable and anything else you can think of beginning with the letter 'U'.

V is for Patrick Vieira Think how many times you've heard 'what Arsenal are lacking is a Vieira-type presence in the centre of the park'. Vieira is undoubtedly the club's greatest ever central-midfielder, and is still regarded as being one of the world's best, even to this day.

He spent nine seasons in north London, winning three league titles, three FA Cups, and was club captain during the invincible period. He had quite the career at Arsenal, and oh how we loved him.

W is for Ian Wright

Yet another Arsenal legend. Before Thierry Henry, he was the club's record goalscorer with 185 goals. He managed such a feat in just 288 appearances. His Arsenal legacy lives on through his TV pundit career - he doesn't hold back in expressing his continued love for the club. We all love you Wrighty, all right?!

X is for Granit Xhaka

Well, there wasn't exactly a whole host of options to choose from for X. In any case, Xhaka has had quite a memorable Arsenal career. And, it has not all been ripe and rosy. Having been made captain, he was then stripped of the role in dramatic fashion following a rather nasty moment at the Emirates. He was the shortest-serving captain in the club's history. Oops.

Y is for Youth

Arsenal have long been known as a club that prides itself on its young players, and the development they undergo while at the club. Or, away from the club - *cough* Serge Gnabry *cough*. Our youngest ever appearance-maker? Cesc Fabregas, when he was just 16 years old. Cesc was just one of the young players Wenger developed into world stars. There have been plenty of impressive youngsters who have played in red and white. Long may it continue.

Z is for Gedion Zelalem

He's not at the club anymore. He did feature on four occasions, but that's about it. But his name does begin with a Z.

Zelalem currently plays back in his home country with New York City FC in MLS.