​It's fair to say that today's edition of the Premier League Hall of Fame is going to be an absolute corker.

We have our one and only manager on the list. We have an invincible. We have two Manchester United icons. We have the best pundit on Sky Sports (please don't hurt me, Roy).

You think that's it? Oh boy, you couldn't be more wrong. Some of the biggest and best Premier League legends are on the agenda today, to make up the 2017 crew.

You think it's been good so far? Well fasten your seat belts, it's about to get a whole lot better. The fact that this man is the only manager to make the Hall of Fame, symbolises his greatness. The best manager to ever grace our league - and ​90min's greatest manager of all time - Sir Alex Ferguson achieved a stupendous amount at Manchester United. 13 Premier League titles, two Champions Leagues, five FA Cups and four League Cups. Ridiculous.

Sir Alex takes to the stage, and right at the back of the room, you can hear sniffing from a certain someone. It's hard to see who it is though. Wait, is that Ed Woodward?

The Scot picks up his mic, and everyone in the crowd winces as this loud, chewing sound echoes around the room. Ferguson apologises. No, not for the gum, but for suggesting that David Moyes was the right man to replace him. The sniffing at the back of the room suddenly turns into a sobbing. Definitely Ed Woodward.

He has spoken for a while now, and someone from the audience tells him he has one minute left.

Biggest. Mistake. Of. His. Life.

Fergie scowls and his face turns to red. He begins furiously pointing at his watch and marauding up down the stage. He goes on to speak for another five minutes. The colossus of a centre back had a brilliant career at Liverpool, achieving absolutely everyth...never mind.

Carragher takes to the stage and bans all questions to do with his failure to win a Premier League title. It still haunts him to this day. All of a sudden, he looks into the crowd and turns a pale colour and begins to sweat, as he sees a smirking Roy Keane just sitting there.

He starts off by bringing up Gary Neville's stint at Valencia. He walks off stage immediately after, chuckling to himself. Everyone sits bemused by what has happened. Despite being introduced to the stage as, 'the other Neville', Phil trots on donning a shirt with his face on it, and holding a mug which reads: 'world's greatest manager'.

As he gets halfway through his speech, he notices that no one is paying attention anymore. Everyone has turned away and huddled together around a table. Laughter erupts. There in the middle of the table, sits Gary Neville, bellowing out a set of funny stories about his time in Spain.

Phil can't take it anymore. Enough is enough. His eyes fill with tears as he shouts at his brother:

"EVERY TIME, GARY. EVERY DAMN TIME!!"

Unfortunately, no one notices as he storms off stage and straight out of the room. 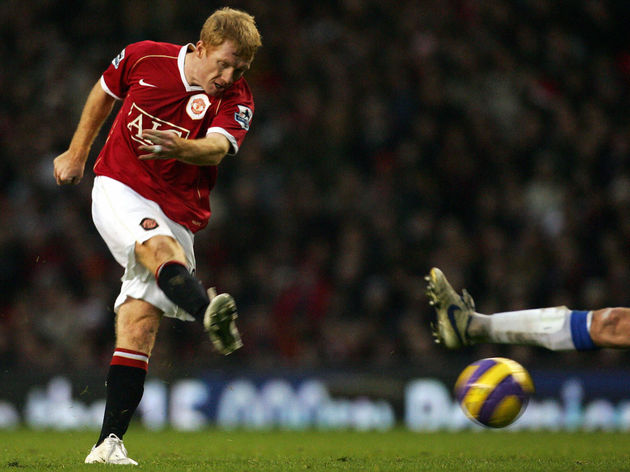 To say that Paul Scholes was the perfect central midfielder, is probably an understatement. The man could do it all - shoot from range, ping a stunning cross field ball, get stuck in to the opposition's attacking players (maybe usually foul them...but still). He was a phenomenon.

Dressed in a very bland shirt and tie combination, the legendary former Red Devil takes to the stage carrying a bag full of balls.

He finally runs out of balls, but in the background, Woodward stands up with a pen and paper and bellows towards the former midfielder, begging for him to sign once more for Manchester United.

"Please Paul, anyone but Fred." What a goalscorer Michael Owen was.

He simply scored goals for fun.

Winning a Ballon d'Or at the age of 22 was a sensational feat. I really was.

Owen's name is called out and he is asked to take to the stage. Unfortunately, he is unable to collect his award as he is at home injured after falling in the bath. Emile Heskey proceeds to pick up the award for him. A Premier League invincible, Gilberto Silva was a beast of a midfielder, paving the way for the more elegant players like Thierry Henry and Robert Pires to shine.

The Brazilian steps onto stage to pick up his award, and it is very evident that he is fighting back the tears. It is most certainly an emotional night for Silva.

However, he makes it very clear that the tears aren't as a result of this award, and actually it's to do with the fact that Granit Xhaka now plays in his position in the current Arsenal team. That's certainly enough to bring most Gunners' fans to tears. David Beckham was of the finest strikers of a football the Premier League has ever seen, with a scintillating ability to cross the ball on a six pence. His time at United was a sensational one, with six league titles to his name.

Beckham walks up the stage in typical Beckham-fashion. Perfect suit, perfect suit, make-up done just right, and typically amazing hai...wait, is he completely bald?! Like, completely clean shaven bald?! He hasn't even got any facial hair?!

An awkward silence fills the room as everyone stares at the hairless man on stage. He smiles and claims that 'it is so in right now'.

Two weeks later, three quarters of England are living without an ounce of hair on their head.