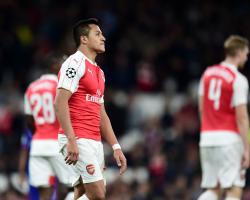 ItÃâs been another disturbingly poor week for Arsenal in Europe, and they face the daunting prospect of playing an in form Manchester United side this weekend

For the younger football fans amongst us, Arsenal used to be an enormously successful club, who didnÃât just appease their fans with FA Cup wins IÃâm not sure youÃâd know that if you were born after 2004.

An embarrassing 3-2 defeat to Olympiakos which ran alongside ChelseaÃâs terrible 2-1 loss to Porto, will just increase the worry spreading like a plague amongst Gunners fans

But how can they return to their former glories, such as their days of invincibility, how can they become title contenders once more?

1) Back Wenger in the Transfer Market

IÃâve looked at ArsenalÃâs business over the last few years and always thought that Wenger was piecing together a quite phenomenal team, piece by piece

Ozil a couple of years ago, Sanchez last year, Cech this time round, these are each top players.

But always around the big signings, there was a scattering of useful players as well, but that didn't come this year in a window where Arsenal needed strengthening the most.

So, looking at the Arsenal team right now, I reckon you need at least five top, top signings to make them genuine contenders and that would be a left back, a centre back, a defensive midfielder, a right winger and a striker.

IÃâm talking top class players, so this would probably set them back at least ÃÂ£150 million, which I doubt theyÃâd spend in one summer

So this project would probably take about three years.

2) Clear Out the Deadwood

I really think they need to add to their defensive ranks in particular, with Nacho Monreal the best of a bad situation at left back and Per Mertesacker just a crime in the back line at the moment, I donÃât think heÃâs anywhere near top four quality

I also think the Wilshire one is harsh, but I do wonder if heÃâll ever escape the clutches of injury woes.

They need to get rid of the lingering stench of these sub par players and replace them with real star quality not as easy as it sounds.

Their flowing, stylish play is something to behold, but often doesn't come off because they donÃât have the calibre of player to carry it off.

This is why I think Arsenal should really keep Wenger around, because their play is wonderful, and on top of that, he can attract big names if Arsenal were to revolutionize their squad with world class talent.

ItÃâs also my belief that the Gunners will suffer the same fall out as Manchester United in the 2013/14 season following FergieÃâs departure, as itÃâs a similar situation.

WeÃâve seen a number of top, top footballers walk out of the Emirates in recent years, such as Samir Nasri, Robin Van Persie, Thierry Henry, Cesc Fabregas and Alex Song, but this factor works in conjunction with the first point.

If Arsenal are going to keep players like Mesut Ozil, Alexis Sanchez, Laurent Koscielny and so on knocking around, Wenger is going to have to convince them itÃâs worth staying by signing league winning players.

If Gunners fans were frustrated by that diabolical transfer window, think how the players must feel

On the base level, Arsenal have a fine team to build off, but they actually have to do some building in order to get anywhere!

So not only is it about bringing good players in, but perhaps more importantly itÃâs about keeping the good ones they already have with them

This is a really key point

English clubs have to start reaping players from their academy; they really are missing a trick.

Arsenal have a fine looking young striker in Chuba Akpom amongst their ranks at the moment, a young man who shone in preseason for the Gunners, but was instead shipped out to Hull City on loan, in a season where theyÃâre crying out for a number nine.

Why not start him? There is quite literally no reason not to

The manager knows how to play him, we saw as much in the off season, itÃâs just a matter of converting it to the top flight

HeÃâs even scoring in the Championship, and for England, so thereÃâs no reason not to try it

And if heÃâs not good enough, then he isnÃât ready yet, and at least you tried

ThatÃâs the time to ship him out on loan, not before the seasons begun

ItÃâs a mind boggling thing for some of these top managers.

Isaac Hayden, Alex Iwobi, Jeff Reine-Adelaide and Ainsley Maitland-Niles all got cameos in competitions such as the Emirates Cup, Reine-Adelaide putting in a particularly astonishing performance against Wolfsburg, but have any been given a shot? The best has been Alex Iwobi whoÃâs made a few matchday squads.

Why spend millions on a defensive midfielder if Reine-Adelaide is showing signs of star quality, why buy a ÃÂ£50 million striker when Chuba Akpom is scoring goals?

Not only Arsenal, but all Premier League clubs need to start taking at least a glance towards their under-21 squads if they need a new player

ItÃâs far easier, and cheaper, than going out and buying a player, and itÃâs far better for our game.

So, all in all, thereÃâs plenty Arsenal can do and need to do if they want to get back on the road to success

They have to pull out all the stops in the transfer window, whilst getting rid of all their rubbish players and keeping their excellent ones

As well as that, they have an extremely successful academy, and need to give a few of their under-21s a chance in the first team.