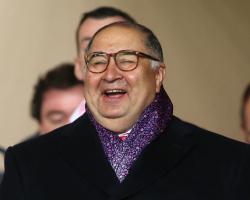 Russian billionaire Alisher Usmanov has hit out at owner Stan Kroenke in mounting a defence of manager Arsene Wenger, with Arsenal slipping to sixth in the Premier League.

Usmanov - who does not hold a seat on Arsenal's board - insists current boss Wenger should help hand-pick the Gunners' next manager.

Wenger's contract expires this summer and the veteran French boss has remained coy on his future, while sections of Arsenal's fans want him replaced.

"I do not think that the coach alone is to be blamed for what is happening," Usmanov told Bloomberg.

"Some continuity is needed

This includes the need to prepare a successor for Wenger, but in a very respectful way.

"I can suggest that Wenger himself can prepare a successor."

Despite Usmanov's comments, the Russian billionaire admitted Arsenal's chief shareholder Kroenke will have the ultimate say on Wenger and the club's future.

Usmanov insisted the board and owner must "bear huge responsibility" for Arsenal's on-field troubles, then admitted he has little influence behind the scenes.

"I personally, unfortunately, am fully isolated from decision making in the club," said Usmanov.

"All the responsibility for the fate of the club rests with the main shareholder."

Wenger is approaching 21 years at the Arsenal helm, but also the end of his current contract.

The former Monaco boss has continued to deflect questioning on his long-term future however, and most recently in Friday's press conference to preview their Monday-night league trip to Crystal Palace.

"I spoke enough about that," said Wenger on Friday.

"I have nothing to add

I cannot tell you anything more than what I said many times, you know.

"I can understand that the subject is maybe of interest, but for me what is of interest is what's happening on the football pitch."