Arsenal and Bayern Munich fined by UEFA over fans behaviour 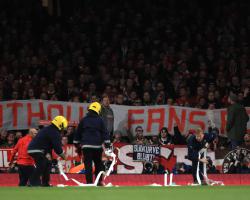 The Gunners were thrashed 5-1 by the Bundesliga champions in the second-leg meeting, with the game interrupted by a pitch invader

The result meant Arsene Wenger's side were eliminated 10-2 on aggregate, a record Champions League defeat for an English club and the seventh year in succession Arsenal have fallen in the first knockout stage.

During the defeat, a supporter made his way on to the pitch before being apprehended by stewards, with UEFA confirming Arsenal were charged - and now fined 5,000 euros (ÃÂ£4,300) - for the infringement.

Bayern were also fined 3,000 euros (ÃÂ£2,600) after their fans threw till rolls on to the pitch in the opening minutes of the game in protest to the high ticket prices at Arsenal, again causing a delay to proceedings.

A statement read: "The UEFA Control, Ethics and Disciplinary Body (CEDB) has announced the following decisions:

"Match: UEFA Champions League round of 16 match between Arsenal FC and FC Bayern MÃÆÃÂ¼nchen (1-5), played on 7 March in London, England

16 (2) of the UEFA Disciplinary Regulations (DR)